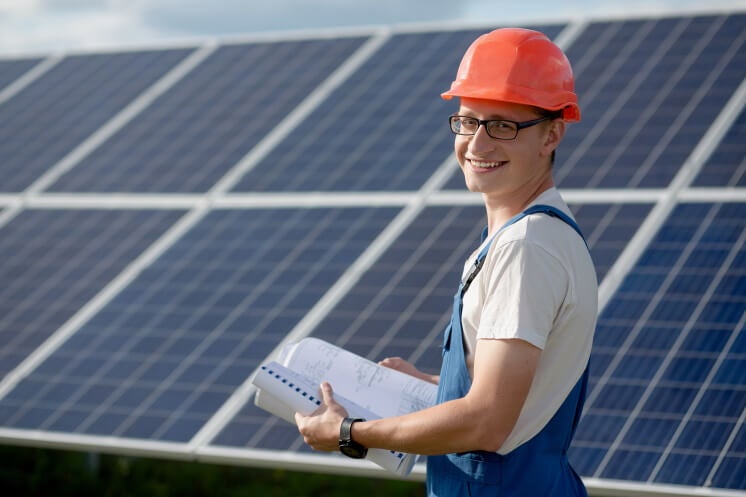 ✔ Solar skin and purifiers are being developed, showing solar’s versatility

✔ We’ve got everything you need to know, from kilowatt hours to quantum dots

Solar panels are on the rise – and that’s why you’re here.

You want to quickly learn everything you need to know about renewable power, an energy source which is taking over from fossil fuels on an international stage.

From July to September 2019, renewable sources generated more electricity than fossil fuels in the UK for the first time ever, and the first half of 2019 saw Scotland produce enough wind energy to power two Scotlands.

Solar power is at the forefront of this revolution, with prices having fallen by 70% since 2010. There are now more than a million solar installations in the UK – so let’s get straight to the A-Z of solar, which contains all the vital information you crave.

If you’re already aware of how much solar panels lower your energy bills by, you can fill in this form to get free quotes from experts in your area.

Not the band – but just as cool. You see, solar panels convert sunlight into an electric current – direct current (DC) electricity, to be specific.

The panels’ solar inverter then converts that charge into alternating current (AC), which is the type of power you need at home.

You can cut your energy bills by investing in solar panels.

With the help of your new solar array and the Smart Export Guarantee, you can save up to £390 per year on your bills, according to the Energy Saving Trust.

China also deserves a shout-out in C, considering the country produces at least three times more solar energy than any other nation on Earth, and more than the next three countries – Japan, the US, and Germany – combined.

Some of you may be tempted to install or even create your own DIY solar panels.

No. Don’t. Stop, in the name of love…for safety. Setting up your own panels can lead to inferior results, void your guarantee, and lead to serious injuries. After all, you’d be installing heavy pieces of hardware, a dozen metres above the ground.

You wouldn’t attempt another dangerous specialist skill you weren’t trained in, like brain surgery or mountain climbing – so don’t attempt this one either.

Efficiency is the main watchword when it comes to solar panels. The amount of electricity which your system can generate from a certain amount of sunlight is key to deciding whether they’re good value.

Solar panel efficiency levels can now reach 23.8%, making them a more cost-effective purchase than ever – and they’re only getting better.

They’re able to bend around a corner or over a bump in your roof, because they’re made of much less substantial silicon sheets. To put it into context, they’re 10,000 times thinner than a human hair.

We use gigawatts to measure how much solar energy we produce as a planet.

For instance, in 2019, solar energy capacity increased by 98GW to 586GW, an increase of 20% – which was a bigger rise than any other source of power enjoyed, according to the International Renewable Energy Agency (IRENA).

If you’re looking for a cost-effective, convenient source of renewable energy to get installed at home, a solar panel array is the best and only realistic answer.

Wind turbines are far too expensive – a small 2.5kW system costs up to £19,000 – while hydropower requires a nearby stream or river, and heat pumps and biomass machines are costly and take up an inordinate amount of space inside and outside your property.

All of this making solar panels uniquely positioned to save you money on your energy bills without making you bankrupt or using precious space in your home.

Installation of your solar panels should be carried out by a Microgeneration Certification Scheme-accredited engineer, so you can qualify for the Smart Export Guarantee.

They should take care of the whole process, which will take a day’s labour, on average.

The junction box contains all of the crucial electric gear that powers everything a solar panel does. This equipment is kept in a box to protect it from the weather – not to mention pigeons.

When solar panels are made, adding the junction box is the penultimate step, right before the solid aluminium frame that protects panels and allows them to be fixed to your roof.

This is the measurement that shows how much usable power is produced by your solar panels.

Over a year, the average family of three will need a 3kW system, made up of 10 panels with 300W potential. Because conditions are never perfect all year round, this array will produce around 2,550kWh – the actual amount of electricity your household can use.

Light is the key ingredient is this entire process, and without the sun – the light that never goes out – we wouldn’t have solar power, or indeed humans.

But if the sun’s covered, don’t worry – you don’t need visible light to charge your solar array. There are many wavelengths of light you can’t see, that will still shine through cloud cover and power up your panels. 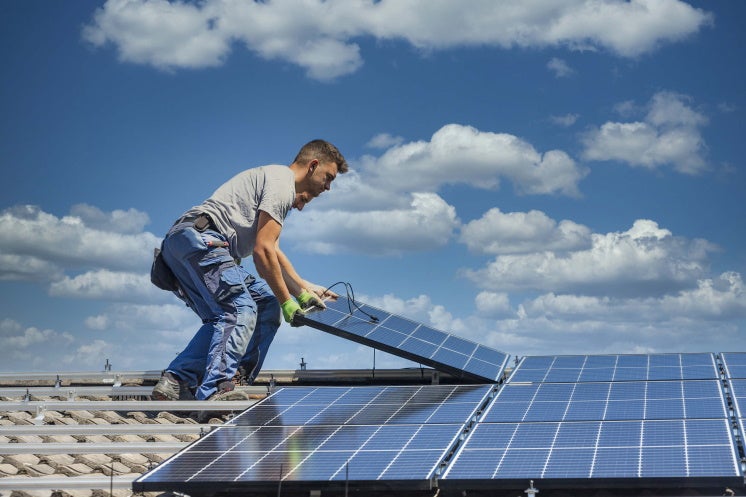 Once you have your beautiful solar array, make sure to keep them gleaming. You should clean your panels at least once per year, using soapy water and a non-abrasive sponge.

Perform this clean from the ground, and if you can’t, hire a professional to do it for you.

It’ll be worth it – getting rid of the dust, bird droppings, and leaves from your system can stop energy production from being reduced by as much as 25%, according to a 2017 study.

If you live in the UK, your solar panels are unlikely to power your home all on their own. That’s where the National Grid comes in, with all the extra power you need.

You can also sell any excess power to the National Grid, as the Smart Export Guarantee obliges large energy suppliers to pay households for the renewable energy they provide to the Grid.

The roof isn’t your only option when it comes to solar panels.

If you have enough land, if your roof isn’t strong enough to hold their weight, or if you want to make sure your array is pointing in the best direction to get the optimal amount of sunlight, you may consider getting panels installed on the ground.

Solar panels have come on leaps and bounds over the past decade or so.

They already add an average of 4.1% to your home's value – and they’re going to keep becoming more efficient and innovative.

New solar panel technologies include water purifiers, floating solar farms, and wearable solar. Soon, we’ll be harnessing the sun’s energy better than ever before – to the planet’s benefit.

Another innovation in the works is solar skin – a thin, malleable layer of material that can wrap around phones, laptops, and even clothes, and which relies on quantum dots.

These dots are made up of nanoparticles that a research team at the University of Queensland have printed onto transparent sheets.

The scientists aim for their quantum dots to be coating roofs and powering phones all over the world by 2023.

Q also stands for quotes, because one of the wonderful parts of buying solar panels – along with saving on your energy bills and doing your part to fight climate change – is that you can get free quotes from local experts, simply by filling in this form.

It wouldn’t make much sense for a renewable energy source to harm the environment after it stops working – and thankfully, solar panels won’t have to.

You can get your solar panels recycled by simply contacting your installer. They’re legally obliged to ensure your defunct blocks of silicon are properly recycled.

If you store solar power as well as generating it, you’ll be able to harness around 30% more of the sun’s energy – which will save you a substantial amount of money.

The best way to do this is to buy a solar battery alongside your panels. Make sure to get a lithium-ion battery, as they offer faster charging and a higher capacity than any other model.

Transparent solar panels are another prime example of how quickly this technology is developing.

Scientists in Michigan have developed solar panels with 86% transparency, and in the not-too-distant future, buildings could be covered with solar panels that are invisible to the naked eye – completely erasing any aesthetic objection to solar arrays.

Solar Trade Association analysis from 2016 shows there are at least 800,000 homes in the UK with solar panels – and that number is set to grow further in the coming years.

Solar panels are based on voltaics, specifically the photovoltaic effect. Putting the idea of taking the sun’s light and using it to power your home into practice only works because of this atom-level reaction.

The process relies on all light containing particles called photons. When sunlight hits the solar cells, its photons hit the atoms, eradicating their electrons. This displacement creates an electric current – direct current (DC), specifically, which is then converted to AC.

The equipment warranty will cover you for physical failures, and typically lasts between 10-12 years. This will protect you against defects, the panels failing completely, and environmental issues causing a halt in energy production.

The performance warranty insures you against your solar panels falling below their high standards when it comes to producing electricity, and will usually guarantee you at least 90% production after 10 years, and 80% after 25 years.

Yes, it’s harder to find an entry for X, and no, we haven’t made this up – you can get solar-powered x-ray machines, and they’re incredibly useful.

Not only are they powered by renewable energy, but they’re able to withstand power cuts and electricity shortages which can be common in developing nations. All they need is the sun, to keep performing their important medical functions.

Solar panels will typically last between 25-30 years, which is enough time to save a whole heap of money on your energy bills, and save a great deal of CO2 emissions.

The zenith angle is the arc of the sun as you look at it from the ground, and forms a key part of deciding how to position your solar array.

Ideally, you’d have your solar panels moved throughout the year to take full advantage of where the sun is in the sky, with your array positioned at a 62° angle during the summer and 15° in winter – but either way, you should leave it to a trained installer.