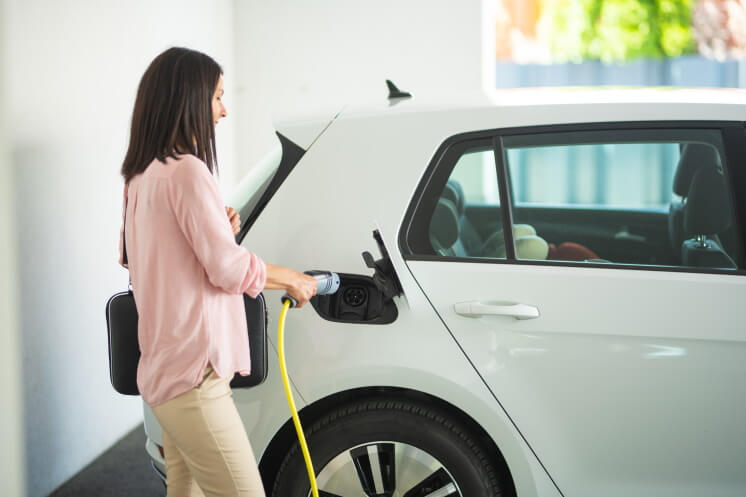 Buying an electric vehicle charging point for your home can save you money, ensure you always have a fully charged battery, and make your life much easier.

You’ll never have to worry about frantically searching for charging points – in fact, you’ll rarely if ever have to charge your car in public again.

And by using your new home charging point, you’ll cut your recharging costs by £180 per year compared to using public chargers.

If you’re ready to install a home charger, you should shop around to get the best installation quote – and to help you with that process, we’ve created an easy-to-use comparison tool.

Simply provide a few details about your home, and we’ll pass them on to our expert installers.

How much does it cost to install an electric car charging point?

It’ll usually cost you between £800 and £1,100 to buy and install an electric car charging point on your property.

If you use an installer from the company selling you a charging point, it’ll cost you the same kind of price no matter where you are in the UK.

It may be cheaper to hire an independent electrician – but they almost certainly won’t be as accustomed to the technology, making this a risky option.

The worst outcome would be to buy a charging point that’s rendered useless by a sub-par electrician.

How much does it cost for different charger types?

Speed makes a big difference. Choosing a 7 kW charging point over a 3.6 kW model may well cost you hundreds of pounds more, but you’ll fully recharge your car in half the time.

22 kW is the current ceiling for home chargers – but unfortunately, they don’t work in most UK homes, which don’t usually have a three-phase electricity supply.

The time it takes for each charger type to reach full battery is calculated with the average electric vehicle capacity of 60.4 kWh in mind.

Are electric car charging points cheaper in the US?

Charging points are slightly cheaper to buy and slightly more expensive to install in the US – meaning that ultimately, they cost about the same.

That means the average amount you’ll pay in total for a charging point is $800 (£600) – exactly the same as the UK average.

A breakdown of the costs

If you buy a 7 kW charging point – which we generally recommend for most drivers – it’ll typically cost you £550 for the charger, and £400 for the installation process.

Below we’ll explain why the installation costs £400, but bear in mind that the savings should more than make up for this initial outlay – and that not getting a professional installation could cost you much more in repairs.

The first step is a survey to see if your property can house an electric car charging point, and to plan out where it’ll go. This stage is usually free.

At a later date, a professional will set up the physical charger in a suitable location – often in a garage or on a driveway – and run up to 10 metres of secure cabling to your fuse box while also fitting a safety cut-off device.

These pieces of hardware cost around £100.

Some electric charging points also require that an earthing rod be installed, which can make the process more expensive and disruptive. Thankfully, newer models are moving away from this need.

And of course, before leaving, the installer will test your new charger to make sure it works.

If you’re wondering where the other £300 comes from, it’s the cost of labour – which is more than reasonable, considering the installer’s expertise is protecting you against disaster.

Is it worth it to get a home charger?

Yes. Your average annual savings should more than make up for the up-front expense, which is £950, on average.

After all, it’s 71% times cheaper to charge an electric vehicle than to refuel a petrol car, meaning you’ll typically save £880 per year in running costs by going electric.

Of course, if you have an electric vehicle, you can just use public charging points instead of getting a home charger – except they’re usually 50% more expensive to use.

This significant price difference means you’ll save £180 per year, on average, by purchasing a home charging point. So in just over five years, you’ll break even on your charger.

Are there any government grants available?

Up until April 2022, house owners can use the Electric Vehicle Homecharge Scheme (EVHS), a government grant that reduces the cost by 75%, up to £350 (including VAT).

Unfortunately though, house owners won’t be able to access the EVHS past the end of March 2022.

From the beginning of April 2022, the EVHS will only apply to people who rent or own flats.

Will the costs decrease over time?

The cost of any technological innovation tends to come down over time, and we can expect the same to be true of electric vehicle home chargers.

It’s already hundreds of pounds cheaper to buy a 3.6 kW charger than it was just a few years ago – and as 7 kW and 22 kW chargers become increasingly common, prices should fall even further.

Unfortunately, the EVHS grant will end for house owners in March 2022, which will remove the current £350 discount.

However, the government announced in October 2021 that it would be spending £620 million on “targeted electric vehicle grants and infrastructure.”

We recently asked the government for more specifics on what this £620 million funding boost will mean for homeowners.

In response, a Department for Transport spokesperson said the funding's allocation was “still being decided.”

At this point, you’re ready to save money, help the climate, and make your life more convenient by getting a home charger.

But of course, it makes sense to weigh up different installation quotes for your perfect EV charging point.

Thankfully, we’ve created an easy-to-use comparison tool to make that process straightforward. Simply provide a few details about your home, and we’ll pass them on to our expert installers.