✔ Solar panels could increase your home’s value by 4.1%

✔ Solar power is the UK’s most popular energy source

You want to get solar panels.

Yes. The research indicates that solar panels add around 4.1% to a home’s value – which means you could make tens of thousands of pounds.

That makes sense, too: who wouldn’t want to buy a home with better energy efficiency than the average property, that can save you money on your energy bills every month?

If you buy your solar panels outright, they won’t affect your ability to sell the property, and if you leased them, that should be fine too! Just make sure you and your installer followed all the legal requirements when making the purchase.

“Getting a mortgage on a property with leased solar panels should not present a problem.”

If you’re worried, talk to your mortgage advisor.

Assuming they tell you everything’s fine, you can fill in this form to get free solar panel quotes from specialists in your area. 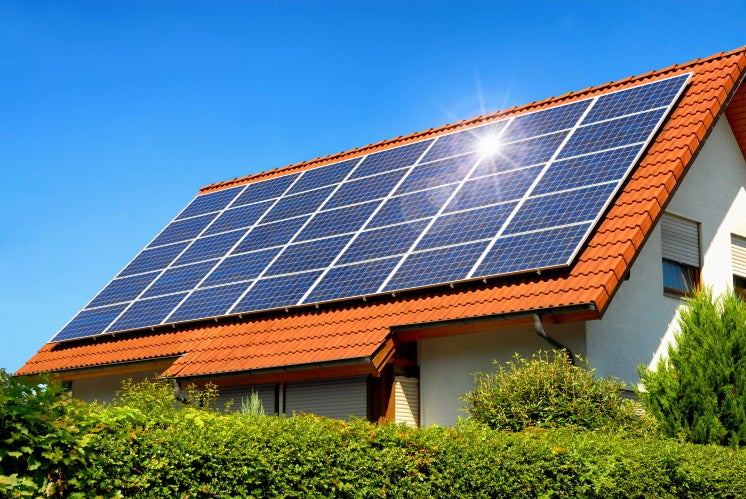 How much are solar panels?

This is a large investment, but it enables you to save up to £390 per year on energy bills, all while doing your part to help the climate.

And when you consider house prices, the cost of solar panels pales in comparison.

So on average, you’ll be paying a measly 2.1% of your home’s value to get solar panels – an excellent investment that will quickly produce returns.

Do solar panels increase the value of your home?

Multiple studies have confirmed that solar panels add a substantial amount to your home’s value – though properties in certain locations benefit much more than others.

Naturally, homes in sunnier areas will benefit more from solar panels, so it’ll be easier to persuade buyers to meet a higher price.

That was clear from a seven-year California-based study, published in 2012, which found that solar panels add 3.5% to the value of a home – and even more if you’re selling in a liberal community.

And even better news came in 2019, when a study by real estate company Zillow showed that solar panels raise a home’s value by 4.1%, on average – which would increase the average UK home’s value by £9,500.

The research, which compared properties with and without panels, found that those selling their home in big cities – which tend to be more liberal than other areas – could make even more.

In New York City, a solar array boosted a property’s price by 5.4%, while Orlando buyers paid 4.6% more for a solar home.

The pro-solar trend held across the country, though, with 80% of home buyers saying energy-efficient features were important to them, according to Zillow.

This enthusiasm for renewable energy holds true on the other side of the Atlantic Ocean too.

A study in University College London journal Opticon1826 showed 33% of people would be more likely to buy a property if it had solar panels.

53% said savings on fuel bills would be the most important factor in buying a property with solar panels – so make sure that you and your estate agent emphasise how an array can lower their energy costs by £390 per year.

In fact, much of the data seems to suggest that UK properties experience even more of a value increase than homes in America. A recent study found that, on average, solar PV boosts home values by 14% – and that figure rises to 38% in some parts of England.

Depending on where you’re located, this could lead to an extra £90,000 onto your property value.

Plus, according to Greenlancer, not only do homes with solar panels generally sell for more money, but they have historically sold faster than homes without panels.

Check out how much you could gain in the table below:

Purplebricks’ director of communications Zoe Melarkey told Eco Experts that while solar panels “don’t necessarily increase the value” of a home, the right buyer can change everything.

“They definitely increase the sale factor and kerb appeal to people who are keen on eco-friendly features,” she explained.

Melarkey pointed out that “most solar panels are leased, which means when you buy the house, you also buy the remainder of the lease – so some people might not be keen to take that on.”

In situations like this, the solar installer buys the space above the property and leases it back to the homeowner. In return, the company generally installs the array for free.

However, she added, if you buy your panels outright, “that makes things easier.”

Melarkey also warned against removing your panels, either because you don’t want to enter the housing market with a solar array, or because you want to install them on your new home.

“If you want to remove the panels,” she said, “there’d be quite a substantial bill to do this.”

You’ve probably heard the long-standing debate over whether panels actually look nice on a property – and you might even have your own opinion on the matter.

To get a better understanding of how people feel about solar panels’ appearance, we’ve carried out a survey, asking 112 people how attractive they think solar panels look on a home.

Interestingly, there was a clear correlation in our survey between the age of the respondents and how attractive they found solar panels.

To get a better idea of this relationship, check out the results in the chart below. Respondents were given the option to rate the attractiveness of solar panels on a scale of 1-5 – with one being the least attractive, and five being the most – which we have grouped together into three categories below.

As you can see, there’s a dramatic difference between the oldest and the youngest age groups.

What’s more, a massive 85.7% of respondents in the oldest category rated solar panels as ‘unattractive’, rather than just ‘acceptable’, compared to just 12.5% of respondents aged 13-24.

Despite the mixed responses, 86.8% of respondents said they would buy a house if it had solar panels on the roof.

Thankfully, as the solar industry evolves, experts are coming up with new ways to improve the look of solar panels. One simple way to improve the appearance of a roof is to look into integrated panels – these sleek sheets sit snuggly in between tiles, rather than looking bulky, sitting on top of the slates.

There are a few reasons behind this increase in property value, but it mainly boils down to how much solar power can save homeowners on energy bills. Solar panel owners can also sell surplus generation back to the grid through the Smart Export Guarantee (SEG) – bringing in even more money.

In fact, we worked out that if you have a three-bedroom house, you'll save £256.60 per year on your energy bills from solar panels, and make £82.05 from the SEG.

Not to mention that buying a home with panels already attached can help homeowners avoid the upfront installation costs.

Solar-equipped homes also tend to sell for more because solar panels are considered to be upgrades to the home – similar to how an extension or conservatory increases a home’s value.

Solar panels can also increase the energy rating of a property, which is hugely desirable for buyers – especially since the government is pushing for all houses to be rated ‘B’ by 2030.

The Department of Energy and Climate Change (DECC) analysed over 320,000 properties between 1995 and 2011, and found that when a home’s EPC rating rose from band G to E – or from D to B – its property price also rose significantly.

You could benefit from this kind of shift. 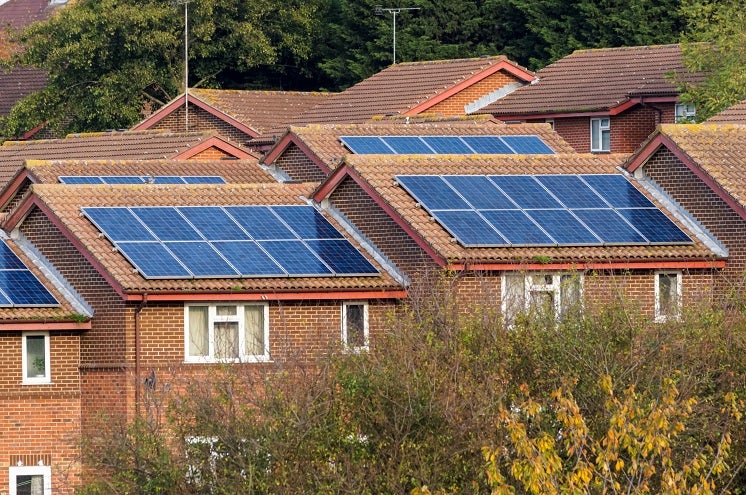 Other factors to consider

When it comes to energy prices, each region is different. This is because each area's local distributor has its own charges set for suppliers – and energy providers then pass these additional costs onto customers through their energy bills.

If a property with solar panels is in an area where energy prices are particularly high, it will become much more valuable. This is predicted to become more commonplace as energy prices surge across the UK.

Location can also influence the amount of sun exposure panels get, which has its obvious benefits for solar energy – the more sunlight you have, the more energy can be generated. This is one of the key reasons why Cornwall is the solar hotspot in the UK.

This overlaps with our previous point, but depending on how much local installation prices are in the area, a property with pre-installed panels could be like gold dust.

If it’s a pricey area compared to other parts of the UK, buyers will be able to save roughly £5,000 by investing in a home with a system already installed.

If you have a pretty small system, don’t expect it to add a huge amount of value to your home. Typically, a larger system will generate more energy and will save you more on energy bills.

We’ve outlined Lawrence Berkeley National Laboratory’s findings on how much different solar panel systems can influence property value in America, to give you an idea of how much extra money you could rake in:

Age of the panels

If your system has seen better days – whether that’s due to wear and tear or just old age – it probably won’t add much value to your property.

Bear in mind that solar panels generally last for roughly 25-30 years before their efficiency starts to decline. If your panels are reaching their twilight years, there's a chance the buyer will need to carry out repairs or replace worn-out parts fairly soon. It might even end up costing the same as getting a new system.

Pros and cons of selling a home with solar panels

The top 9 factors that affect the value of your home

1. The size of your home
2. The housing market
3. The value of homes in your neighbourhood
4. Proximity to good schools
5. Its condition and energy efficiency
6. Crime statistics
7. How close it is to cultural centres
8. The size of your garden
9. Nature of local job opportunities

Solar panels will add value onto your home, according to multiple studies – and it just makes sense.

After all, the worst part of buying anything which’ll make your life better is paying for it. If you can buy a property that already has a gorgeous, functioning solar array, it removes the only significant obstacle.

Your buyer can just lie back in the sunshine and watch the savings roll in – which is probably why 65% of people told our National Home Energy Survey that they were likely to buy a house with solar panels.

If making your home more valuable sounds good to you, the next step is to fill in this form to receive free quotes from solar specialists in your area.