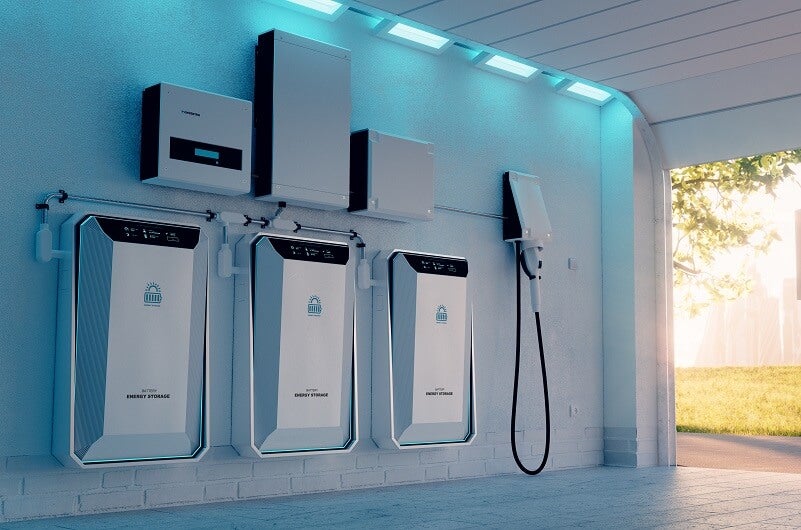 Making the switch to solar? That’s great, solar energy is one of our best tools in the move away from energy generated by fossil fuels.

To get the most out of solar energy though, it’s worth thinking about getting solar batteries.

Solar batteries are a way for solar panel owners to store the electricity they generate. They can then use the stored energy to power their home, which is perfect for when solar energy isn’t immediately available (at night, for example).

To help you pick the right one for you, we’re breaking down the best solar solar batteries available in 2022. Read on to find out.

Tesla is best known for their electric vehicles and with that, excellent knowledge of making batteries. It’s this knowledge that they’ve put to the test with the Tesla Powerwall 2, a solar battery that sets a new standard for the industry.

What makes it the best for ease of installation though? Well, it comes with an AC lithium-ion battery system, which makes it incredibly easy to attach to an existing solar panel installation.

The Powerwall is whisper quiet too, and with its sleek aesthetics, it looks every part the futuristic tech we’ve come to expect from Tesla. If you need extra power, you can stack multiple Powerwalls together, but with a healthy capacity of 13.5 kWh (kilowatts per hour), most homes should function fine with just one.

What are the downsides of the Powerwall 2?

Unfortunately, the Powerwall 2 is a bit on the pricey side, clocking in at around £7,450 per unit. This rises by a further £1,480 for the Tesla Gateway if you want the Powerwall to function as a backup in case of a power cut.

If you’re serious about getting into solar batteries though, definitely consider getting the Gateway because it unlocks a lot of the smart features (including monitoring capabilities).

Enphase Energy is one of the leading companies in solar manufacturing, pioneering technologies such as microinverters for solar panels (meaning the power keeps flowing even if one or more solar panels stop working).

They also manufacture solar batteries with a focus on innovative features, such as the Enphase Encharge. The Encharge functions as an all-in-one solution for a home’s entire energy system, meaning it manages more than just solar panels.

It does this with their smart switch feature, which automatically switches between solar, grid, battery, or generator power, depending on what you need.

The Encharge works seamlessly in power outages too, with automatic grid failure detection that immediately turns on the battery when the power fails. No fumbling around in the dark!

What are the downsides of the Enphase Encharge?

It’s a similar price to the Tesla Powerwall 2, but without the power to match (the base Encharge unit has 3.5 kWh). Thankfully, as a modular battery system, the Enphase Encharge can be expanded to include multiple 3.5 kWh units for additional capacity.

Want to be free from the shackles of the power grid? Off-grid living is the answer, but you’ll still need a way to power your home. There’s always the option of a fuel-powered generator… but if you’re going off-grid why not opt for a solar solution?

If you do, the Powervault 3 is the solar battery to go for. Why? Its optional 20.5 kWh capacity means you’ll have plenty of energy to power your off-grid home in any situation. To be clear, whilst there are larger capacity batteries on the market, this battery provides the best combination of capacity and portability. This makes it perfectly suited to a residential property that needs lots of capacity.

The Powervault 3 also comes with two DC-inputs, enabling you to connect it directly to your solar panels. This means that, if and when your existing inverter fails, you won’t need to buy a replacement. That’s basically saving you about £1,000.

What are the downsides of the Powervault 3?

With great battery capacity comes great weight, and the Powervault 3 is no different. The 20.5 kWh version clocks in at a hefty 330 kg, far exceeding that of most other solar batteries.

Manufactured in South Korea, the LG Chem RESU-10H has cemented itself as one of the most popular solar batteries on the market. Its 90% usable capacity means the 9.8 kWh actually goes further than some higher capacity models, plus at only 97kg, it’s pretty light.

Costing around £5,100 and considering the features you get, the LG Chem RESU-10H is definitely the best value for money in our list. If you don’t need the 9.8 kWh capacity, you can always drop down to the 4.2 kWh model, which shaves the cost down to £3,300.

What are the downsides of the LG Chem RESU-10H?

LG only offers a 60% energy retention guarantee over the battery’s lifetime. This is 10% less than the guarantees offered by both Tesla and Enphase.

Known for its high power and flexibility, the BYD Battery-Box Premium HV is ideal for commercial solar PV systems. For residential purposes, your best bet would be the 8.3 kWh model. This will have more than enough power for everyday usage.

For commercial systems, or larger homes, or even if you just want more capacity, the 22.1 kWh model is the way to go. Despite the higher capacity of the Powervault 3, it is generally too large and powerful for most residential applications.

What’s also great about the BYD Battery-Box Premium HV is its ability to function well in nearly any environment. This is because the lithium-ion batteries are cobalt free, which means they’ll work better in high temperatures than other solar batteries that use cobalt.

What are the downsides of the BYD Battery-Box Premium HV?

Despite the potential for high capacity, the manufacturer states that it’s only good for around 3,000 cycles. Now to be clear, that’s still a solid amount of cycles, but you do run the risk of having to replace the unit earlier than you might than with other solar batteries.

If pure power is what you need, look no further than the Generac PWRcell. It has an enormous potential power output of up to 34 kWh, putting it far ahead of any other battery on this list. With more battery power, the more things you can run at once.

It’s still plenty flexible and as a modular unit, you’re easily able to start off with 8 kWh. You can expand this in increments of 3 kWh, so you’ll be able to more precisely customise the capacity according to your needs.

The unit’s Smart Management Modules are a godsend too, enabling you to manage power distributions during a powercut. This makes sure that any critically important power needs are met.

What are the downsides of the Generac PWRcell?

The immense capacity of the Generac PWRcell doesn’t come cheap, and we really mean that. For the mid-range 22.1 kWh version, expect to pay around £14,600.

Most people have heard of Duracell, the American company famous for their disposable batteries. They’ve since branched out into the solar market, creating the Duracell Energy Bank.

The Energy Bank is the ideal choice if you’re looking to power a smaller household, or just want to add energy storage to your home’s energy mix. Offering 3.3kWh of capacity and easy installation, the Energy Bank has become a popular option (plus you can always add another to scale capacity up to 6.6 kWh).

What are the downsides of the Duracell Energy Bank?

Unfortunately, the Energy Bank won’t provide enough capacity of power output to truly take you off the grid. If you’re looking to move off-grid 100% of the time, consider a larger battery unit.

How did we choose the best solar batteries?

Phew, there it is, the 7 best solar batteries in 2022! How did we decide this though? We used the following criteria:

The size of a battery affects how much charge it can hold. Measured in kilowatt hours (kWh), most solar batteries range from 1 to 13 kWh, although you can find batteries with more than twice this capacity.

It’s important to know that a battery's total capacity is not how much electricity it can store. This is misleading, as you should never actually use a battery’s entire capacity, otherwise you run the risk of damaging it. When shopping for a solar battery, users should always look out for the battery’s usable capacity.

Not to be confused with capacity, power in terms of solar batteries means how many appliances you can run at one time. If you have a battery with high capacity but low power, for example, it will last a long time, but won’t be able to power as many things at once.

For example, if you have a 10 kWh solar battery with an 80% DoD, you should only use it for 8 kWh of energy before allowing it to recharge. Most modern lithium-ion batteries come with a DoD of 90-95%.

When you’ve installed your solar battery, you’ll want it to last for the longest time possible. Every battery comes with a guaranteed number of ‘cycles’, with one ‘cycle’ being one complete discharge and one complete recharge.

Not that you’ll ever use your battery in that way – instead, you’re likely to use about 50% and then charge it back up to 100%, which would count as half a cycle. Every solar battery also comes with a product warranty, which is usually 10 years.

One of the world’s leading companies in the global transition to sustainable energy, Tesla is responsible for electric vehicles and solar technology. Their electric car batteries are known for their reliability and this is no different in their solar batteries – their Powerwall solar batteries are amongst the best selling on the market.

LG is best known for their TVs and laptops, but they’ve made successful inroads into the solar market. Their solar panels have received a lot of positive attention and their batteries have become some of the most accessible around. In fact, LG’s solar panels have won the coveted Intersolar AWARD in 2013, 2015, and 2016.

This California-based company has over 15 years of experience in the home energy industry, producing some of the most feature-rich power solutions around. Their batteries are well-known for their emphasis on smart tech, with some models capable of being charged by all energy sources (not just solar).

SolaX has grown from an American startup to an internationally recognised renewable energy company with offices around the world. They have a particular focus on pushing the boundaries of solar technology, creating some of the most efficient solar inverters around.

UK-based Powervault works to create energy storage solutions that help people reduce their energy bills. Their namesake batteries store energy from not just solar, but low-cost electricity from the grid too. That way, people can more easily reduce their reliance on the grid.

Like Powervault, Puredrive is a British company that seeks to help people gain more grid independence with reliable energy storage solutions. They’re also working on improving their battery technology so that homeowners using their batteries can actually feed energy back into the national grid.

Varta is a German company with more than 130 years of expertise making batteries, so it’s fair to say they probably know what they’re doing! They pride themselves on their flexible energy storage solutions, allowing customers to easily expand battery capacity after installation.

The solar battery market is constantly expanding, with more companies looking to cash in on the increased demand. Right now though, the main issue is the cost of not only the batteries, but the solar systems themselves. For too many people this technology remains an impossibility, so we hope that as prices inevitably start to decline, more will be able to benefit.