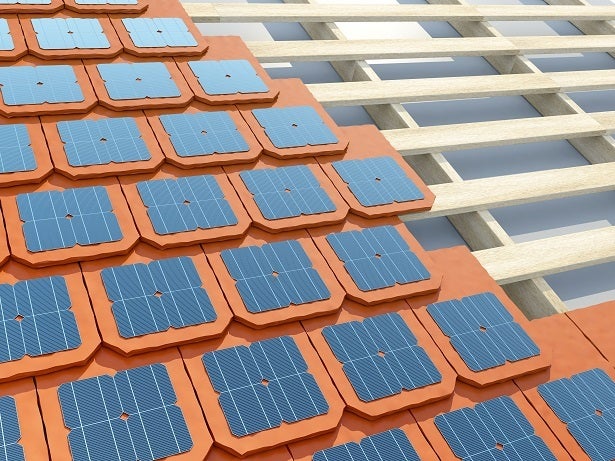 ✔ Solar roof tiles are sleek and subtle, but are more expensive than solar panels

✔ To get free quotes for solar panel installation, fill in the form above

Everyone’s getting very excited about solar power, and quite right too – it’s a clean and renewable energy source that’s completely transforming the way we create our electricity. As the natural supply of fossil fuels rapidly comes to an end, the sustainability of sunlight promises a very bright future. It’s a beautiful thought.

On this page, we’ll tell you everything you need to know about solar roof tiles (or photovoltaic roof tiles), including typical costs and manufacturers. They are much more expensive than solar panels, and their future looks uncertain – but they sure do look good.

After researching the field, we can confirm that if you’re hoping to switch to solar power, panels are the way to go. And – better yet – we can help you find the best deal for solar panels!

Simply pop your details in our custom-built tool, and our qualified installers will be in touch with free quotes for you to compare. 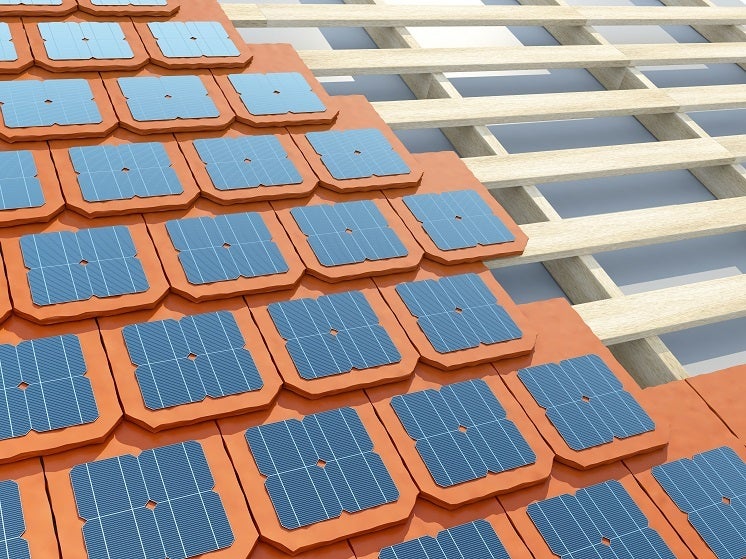 What's in this guide to solar roof tiles?

How much do solar roof tiles cost?

Neither option is cheap, but the tiles will burn a much bigger hole in your wallet. Why are they so much more expensive than solar panels? The main reasons are:

It’s difficult to estimate exactly how much a solar tile system costs, as it depends on 1) the size of your roof, and 2) what proportion of the roof you’d like to be covered in solar tiles.

If you want to go the whole hog and drape your home in pure photovoltaic goodness, you’ll be spending much more than two-tile Brian down the road.

Here are the typical costs of solar tiles compared to solar panels:

How much are Tesla roof tiles in the UK?

Once Tesla solar roofs become available for purchase (it’s currently only possible to put down an £800 deposit), Tesla insist that they will cost $21.85 (£15.95) per square foot. Based on this, here are the expected costs of a Tesla solar roof:

However, Tesla CEO Elon Musk admitted in 2021 that the cost to consumers could be two or three times higher than Tesla’s initial estimate, according to Verge – five years after he initially unveiled the tiles.

And while it's currently unclear as to how long a Tesla solar roof installation will take in the UK, according to Electrek it will be about two weeks. That's a lengthy installation.

What are solar roof tiles? 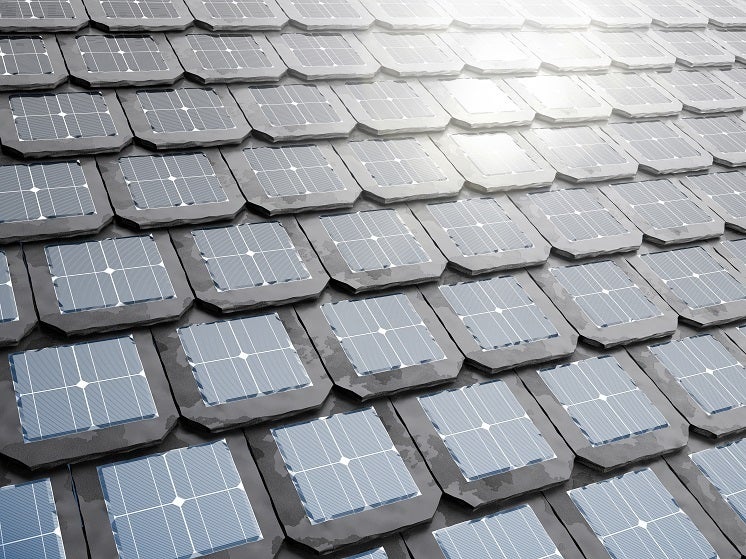 While most solar power companies are busy improving the power and efficiency of solar panels, a small few are simply trying to make them look nicer.

Solar tiles, also known as solar shingles or solar slates, are for people who want a solar-powered home without anybody noticing.

That’s right – solar tiles work just like solar panels (i.e. photovoltaic cells converting sunlight into electricity), but they’re made to look just like traditional roof tiles. While solar panels are much cheaper and generally more efficient than solar tiles, they can sometimes protrude out and clash with the colour of the roof they’re placed on.

However, you can’t just swap a few old tiles for solar ones. Instead, you have to replace your entire roof, which means dismantling it, and rebuilding it with a mixture of traditional and solar tiles (a 100% solar roof is possible, but it’s not cheap).

If you’ve got a big budget and some hefty concerns about the appearance of your home, read on to find out more about solar tiles.

Are solar roof tiles available in the UK?

Unfortunately, the current options for solar tiles in the UK are limited – the only manufacturers are GB Sol, which creates blue solar slates in Wales, and Solecco Solar, which is based in Leeds (find out more below).

You may have heard all the hoo-ha about Tesla’s solar roof tiles over in the US, but nobody’s sure when the first UK installations are going to happen.

They were expected to begin in mid-2018, but Tesla seems to have encountered a few mysterious issues. The people who put down their £800 deposits back in 2017 are still twiddling their thumbs, sitting patiently.

Elon Musk tweeted in Spring 2019 that Tesla’s solar roofs will reach the UK in summer 2019, but it's now 2021 and nothing's happened yet, except Musk admitting that Tesla has made “significant mistakes” that have led to spiralling costs for the company and extended delays for customers.

Interested in standard solar panels? Check out our page on solar panel costs. We also have a guide to the best solar panels on the market, so you can make sure you get top quality kit for your money.

It can be quite daunting trying to do the research yourself – where do you even start when trying to find the perfect set of panels? If you want to speed up the process, find out how much solar panels will cost you by using our comparison tool. Simply answer the question below to get started!

Here are your options when it comes to installing a solar roof in the UK:

GB Sol, located in Pontypridd, Wales, is one of just two manufacturers in the country that can actually install solar tiles on your roof.

Their solar tiles come in just the one style – “natural blue” slate, to complement a slate roof. They’re lighter than traditional tiles (just 3.5kg per slate), which means you could replace your roof without having to strengthen your property’s structure.

A GB Sol solar slate can generate 27.5W of power, and has a 25-year warranty on the product, its solar performance, and its weatherproofing abilities.

Solecco Solar, based in Leeds, manufactures and sells solar tiles for £3000/kW, which means that a 4kW system will cost you £12,000.

It also generally costs £1,000 to install the tiles, according to the company.

Though its product is more expensive than GB Sol, Solecco Solar does offer tiles in eight different colours, from smooth grey to terracotta and old English dark red.

And if you don't need or want to buy solar tiles to cover your whole roof, you can purchase the company's identical (and cheaper) non-solar tiles to make up the difference.

Just as Tesla made electric cars look cool, they’ve transformed solar tiles into something understated and beautiful – though they're not yet available to be installed in the UK.

The clean-energy aficionados from California have created their very own solar tiles, built with photovoltaic cells made by Panasonic. Elon Musk announced the new product in fabulous style on the set of Desperate Housewives in late 2016.

The tiles are extremely tough (up to three times stronger than a traditional roof tile), available in four styles (Textured, Smooth, Slate, or Tuscan), and come with an infinite warranty. You just have to wait a while (and pay a lot) if you want them.

Tesla also sell a high-performing solar battery called the Tesla Powerwall. You can learn all about it in our guide to solar batteries.

This one’s nothing more than a history lesson. The UK-based Solarcentury used to sell solar tiles (the C21e range), but these have since been discontinued. Instead, the company now produces integrated solar panels – the Sunstation Roof-integrated+ – which aren’t quite as subtle as solar tiles, but still sit more seamlessly on your roof than standard solar panels.

For more information about manufacturers around the world who have their own solar tiles on the way, check out this from Ars Technica.

Are you wondering whether you should buy solar panels or solar tiles? Take a look at the pros and cons of solar tiles below to give yourself a better idea.

✔ Sleek and subtle. The biggest advantage of solar tiles is their stylish appearance. With solar panels on your roof, it’s usually pretty obvious that they’re up there – for some people, this is a good thing (“look at me, I’ve gone solar”), but for others, subtlety is key. Solar tiles give you renewable energy without blowing your cover.

✔ Ideal for listed buildings. If you’re lucky enough to be living in a fancy, listed property (or within a conservation area), you might not be allowed to mess with the appearance of your home. Fortunately, solar tiles are a great way to keep the switch to solar sneaky (but please do consult your local authority before proceeding).

✔ More durable. Solar tiles are tough as nails – Tesla’s, for example, are up to three times tougher than traditional tiles – so they’ll give your roof some serious protection. When the hail gets hard or the storms get serious, your tiles will face it all with grit and resilience. Tesla even dropped a kettlebell on their solar tile to prove its strength, but we’re hoping airborne kettlebells aren’t a peril your roof has to face.

✘ Very expensive. As mentioned previously, solar tiles generally cost at least twice as much as solar panels, so you’re really paying for the aesthetics. For a more economical switch to solar energy, solar panels can save you money in the long-term.

✘ Low efficiency. Solar tiles are so busy looking great that they don’t always deliver the goods. The efficiency of solar tiles (i.e. how much sunlight they convert into electricity) tends to range between 10-20%, while high-efficiency solar panels generally achieve 18-25% efficiency.

✘ Limited compatibility. Unless you’re building a new property or willing to replace your entire roof, solar tiles aren’t an option – they want to be all over your roof, or not involved at all. If you’re quite attached to your current home, you’ll find solar panels to be much less demanding.

✘ Long installation time. Of course, replacing a whole roof takes far longer than just sticking on a few solar panels, so this significantly adds to the total cost. For example, when San Jose resident Tri Huynh had a Tesla solar roof installed in early 2018, it required 10-15 people to install it across a fortnight. In contrast, solar panels can be installed in just one or two days.

Should I buy solar roof tiles?

The buzz surrounding solar tile technology is exciting, but everything is still in its early stages; a solar roof is currently very expensive, and UK suppliers are extremely limited. If you’re a homeowner looking to convert your home to solar power, we recommend solar panels.

Want to get tailor quotes straight from the horse's mouth (otherwise known as our expert suppliers)? Pop your details on this short form and our trusted installers will be in touch with quotes for you to compare – you’ll find the best deal in no time.