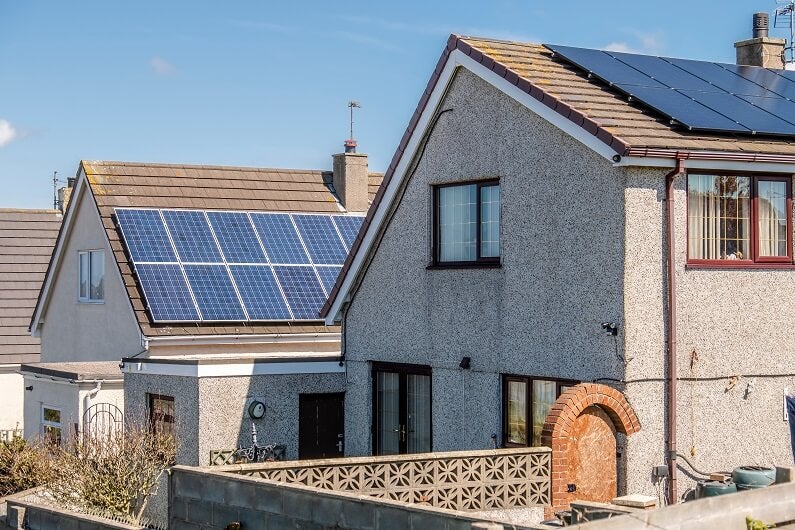 No doubt about it, solar panels are only going from strength to strength. That’s why in 2021, more solar panels were sold than in the previous five years combined (even despite the end of the Feed-in Tariff in 2019).

With solar panels, you can generate your own electricity, reduce your household emissions by 13%, and sell unused energy back to the grid.

If you’re ready to start looking for solar panels, why not fill in our simple comparison tool? Just enter a few details and our trusted suppliers will contact you with free quotes.

Unfortunately, there are currently no existing government grants for solar panels in Wales. When the Feed-in Tariff was still available, UK residents living in Wales would’ve been able to receive cash payments for any renewable energy they generated, regardless of whether they fed it back into the grid (people received a separate fee for this).

This made the return of investment for solar panels far better than what it currently is, even considering the fact that solar panel prices have dropped 82% in the last decade.

You can still make some money from solar panels via the Smart Export Guarantee (SEG). The SEG is a form of solar funding that allows you to make a small amount of money from feeding your spare electricity back into the grid.

Licensed electricity suppliers (those with 150,000 customers or more) are required by law to offer an export tariff for people who choose to use the SEG.

Does the Smart Export Guarantee apply to Wales?

Like every country in the UK, Wales benefits from the Smart Export Guarantee. With it, you can make some money from exporting excess electricity generated by your solar panels. But honestly, don’t expect the SEG to fully replace the Feed-in Tariff.

Can you get paid for excess solar energy in Wales?

If you’re wondering how much you can make from the SEG, we can tell you. With a typical 4 kilowatt peak (kWp) solar panel system, you’ll get around £390 each year with the SEG. Good, but not brilliant, especially when you factor in the average cost of a solar panel system at £4,800.

Assuming this cost, it would take you just over 12 years to recoup the upfront cost of a solar panel system with the SEG.

You’ll also only receive a maximum of 7.5p per kWh (which is the rate currently paid out by Octopus Energy).

How much do solar panels cost in Wales?

Working out how much solar panels cost in Wales depends on a few different factors. These include:

For a 3.5 kWp system, you should expect to pay around £4,800, including installation. This size system is ideal for a family of three, although you could stretch this system to a family of four too.

Consider that the same system in 2014 would’ve cost you roughly £7,900 and it’s clear that solar panels are just getting cheaper and cheaper.

Solar panels work better in Wales than many people think, thanks to a slightly higher than average amount of sunshine hours (when compared to the UK). As a whole, the UK averages around 1,493 hours of sunshine a year – Cardiff comparatively basks in 1,549 hours!

Head to the other coastal regions and the numbers are even more impressive. Tenby, a popular seaside town, has around 1,667 hours of sunshine each year – plenty to power any solar panel setup.

Of course, even on the sunniest of days it’s important that your solar panels are installed in the right place for maximum efficiency. Throughout the year, south-facing solar panels will be more effective than north-facing installations, simply because they’ll receive more sun.

Also, you could always consider getting a solar battery. A solar battery will allow you to store any excess electricity you don’t immediately need, and use it later. There is a substantial upfront cost to solar batteries – around £4,500 – but having one means you can drastically reduce your reliance on the grid.

How many people have solar panels in Wales?

Like the rest of the UK, solar panels in Wales have increased in popularity year after year and with this, the country’s capacity for solar power.

In 2010, solar panels in Wales generated just 3 megawatts (MW) of electricity – 36,000 gigawatts (GW) of electricity were generated by Wales in total in the same year. By 2020, Wales was generating an impressive 1,119 MW from solar power, which is a huge improvement.

2017 saw 48% of Wales’ electricity generated from renewable sources and by 2030, the Welsh government expects this figure to reach 70%.

Graph courtesy of the Welsh Government – Energy Generation in Wales

To get the most out of solar panels for your home in Wales, you’ll need to assess how much energy you use. This will give you an idea of what size solar panel system you’ll require, and how much money you could save.

If you can afford solar panels, they’re absolutely worth getting – generate your own power all whilst slashing your carbon footprint. That’s a win-win in our books!

You can get started on finding solar panels with our handy (and free) comparison tool. Simply fill in a few details and our trusted suppliers will get in touch with free quotes.