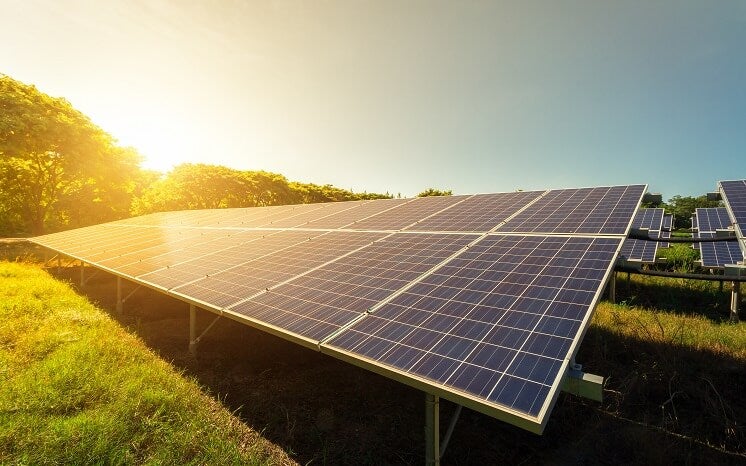 ✔ 40% of the UK’s energy comes from renewables

As the world battles the effects of climate change, solar panels have emerged as a viable, mainstream solution. As many of us coming to terms with the impact of our collective carbon footprint, there’s never been a better time to brush up on all things renewable – starting with solar.

In this article, we’ll reveal the world’s collective solar score, discuss the UK’s ever-improving solar stats, and find out how many solar-powered cups of tea the UK is capable of producing. You know, the essentials.

How much solar energy hits the earth every day?

According to physics professor Washington Taylor, a total of 173,000 terawatts of solar energy strikes the Earth at any given moment. This is more than 10,000 times the world’s total energy use during the same period of time.

To put this into perspective, the world’s population currently consumes just 15 terawatts of power, most of which is generated by fossil fuels. The raw potential of solar energy is there for all to see – it’s time to say goodbye to all that nasty coal and oil.

How much solar energy is generated and used worldwide?

According to Solar Power Europe, 2018 was the peak of global solar success. It will be remembered as the year that solar power broke the record for annual installations, reaching the 100GW milestone of solar panels installed. To keep this positive momentum going, solar power was the third most used renewable energy source in 2018.

But where around the globe is all this energy being generated? And where is it being used? Check out the chart below to find out whether your country is taking advantage of those rewarding rays:

What percentage of the world’s renewable energy is solar?

These percentages may not seem like much, but it’s not all doom and gloom. Renewables are expected to grow by 7.1% each year over the next two decades, and are set to replace coal as the world’s top source of power by 2030. Renewables are also set to experience the fastest growth in the electricity sector, providing almost 30% of power demand by 2023 – up from 24% in 2017.

You can expect to see a combined effort from solar power, and it’s trusty sidekick, wind power –  aiming to provide 50% of the UK’s energy by 2050.

What is the world’s solar capacity?

The world’s total installed solar capacity had reached 480.3 GW by the end of December 2018, according to the latest statistics published by IRENA. Considering the world is relatively new to this type of power, this is a hugely impressive figure.

The chart below displays how the world’s annual capacity has grown over time.

What percentage of the UK’s renewable energy is solar?

Over time, the UK’s renewable energy consumption has improved a huge amount – though we still have a long journey ahead. So far in 2019, roughly 39% of UK electricity has been produced using fossil fuels: 38% from gas, and less than 1% from coal and oil combined.

On a more positive note, another 40% of the UK’s energy came from renewables, including 20% from wind, 12% from biomass, and 6% from solar.

It is unlikely that renewables will generate more electricity than fossil fuels during the full year of 2019. However, the good news is we’ve now reached the stage where it’s a question of when, not if, we pass this milestone.

If you need a little pick-me-up, take a look at the graph below to find out when you can expect renewables to rise up and defeat the fading fossil fuels (spoiler alert: it’s soon!)

What is the UK’s solar capacity?

Solar capacity refers to the maximum output of a country, or the maximum amount it can generate. As of the end of September 2019, the UK’s total solar capacity stood at 13,284.3 Mega Watts (MW), which spans across 1,015,961 installations.

This might not seem like much when compared to other, larger countries, but the UK’s output has still increased by 1.7% (220.2 MW) since September 2018. The British fightback against fossil fuels is on!

To run the UK using solar power alone, we would need 29,690² km of land to home our beloved panels. This would take up 12% of our entire landmass.

How many solar panels are there in the UK?

Now we know the UK’s solar capacity – how many solar panels would the UK need to be run entirely by solar power?

According to Finder, to run the UK using solar power alone, we would need 29,690² km of land to home our beloved panels. Compared to larger countries, such as the US and Russia, this is miniscule, but due to the UK’s dainty size, this would take up 12% of our entire landmass.

What is the best county in the UK for solar panels?

It’s no secret that the UK is renowned for its drizzly weather all year round — but how does this affect the efficiency of solar panels? According to manufacturers’ standards, 25°C is the optimum temperature for solar panels to operate.

The map below lays out places in the UK with the highest and lowest amounts of sunshine per year. Depending on how much sunshine your panels absorb, this will have a knock-on effect on how much energy they will produce.

Check out the map below to see whether you’re living in a good area of the UK for solar power, or whether you might need to move to somewhere with a bit more vitamin D.

Which country has the most solar panels?

So, which brave country is leading us all in the battle against climate change? It’s none other than China, the solar panel world champions. If you’d like to see just how far ahead the country is, check out the graph below, to put their reign of (solar) power into perspective:

As you can see, China has an admirable dedication to solar power. Its growth in the solar industry has been phenomenal – and its solar installations have mushroomed from 2.5 GW of cumulative installation in 2011 to around 130 GW today. The only way is up!

It doesn’t stop there, either. As well as generating all this power in their own country, according to the International Energy Agency (IEA), more than 60% of the world’s solar panels are also provided by China.

China has also announced the ambitious and admirable target of generating 70% of its energy by solar power in 2050. Lead the way, China.

Who is the largest producer of solar panels?

Believe it or not, although China is dominating the solar industry, the biggest and best solar panel manufacturers don’t all reside there. Here is a list of the top ten solar manufacturers worldwide:

As you can see, we have a mixed bag of Asian providers, as well as the odd Canadian and American company. It’s nice to see everyone pitching in!

But how many solar panels are there in China?

Short answer – a lot. In the space of just 25 years, China has gone from having virtually no solar panels to at least 100% more than any other country in the world.

What’s even more impressive about China’s solar power development is how creatively the country has implemented its solar plants. For example, its boldest solar plant, Sungrow Huainan Solar Farm, is the world’s largest floating solar farm, situated just northwest of Anhui province’s Huainan city. This solar farm holds roughly 166,000 glistening panels on a lake, formed on top of a collapsed and flooded coal mine.

China is even getting creative with the placement of its panels on land, too. If you fly over Datong County, you’ll see two giant pandas constructed from thousands of solar panels. And to think, some people complain about how solar panels look.

To put China’s growth into perspective, check out the aerial view of one of its largest solar power plants, Longyangxia solar park:

Although the aerial view shows how much the plant has grown, it doesn’t quite emphasise how large it is. The first photo was taken in April 2013, when the plant had just started development, whereas the second was taken in January 2017. Its four million solar panels cover a massive 27 square kilometers (10 square miles) of Qinghai province.

What is the largest solar panel plant in the world?

Although China is up there in terms of the size and strength of its solar plants, the world’s largest solar panel plant is actually situated in India. India’s Shakti Sthala Solar Plant spans 13,000 acres, is spread over five villages, and has a capacity of 2,000 MW.

Check out our list of the world’s largest solar panel plants below: 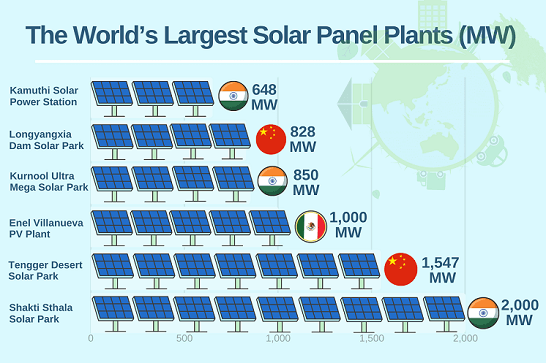 Want to join the ever-growing list of solar-panel-fanatic homeowners? Check out our solar panel cost page to figure out what type of solar panel will be best suited for you and your family.

If you’re itching to shrink your carbon footprint, why not fill in this short form? Just enter your details, and our solar panel experts will soon be in touch with an array of solar panel quotes to choose from.