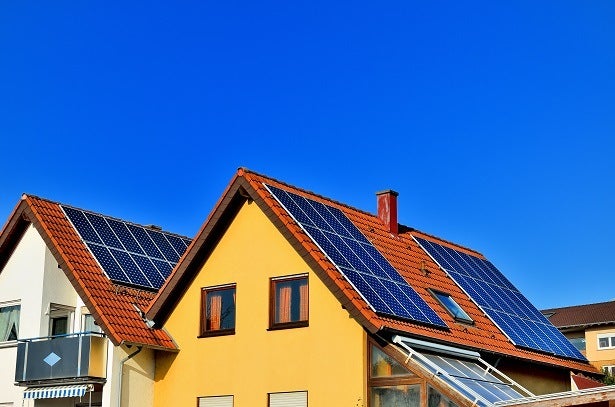 Solar panels are powered by the sun. The Pope also lives in the Vatican, and water is indeed wet. Knowing this, it would be easy to figure that solar panels do their best work on a hot sunny summer’s day, while basically sitting idle on a chilly winter’s afternoon.

But how valid is this? What’s the science behind solar panel efficiency, and is this preconception true? Does a cold dreary day actually affect your solar panels’ output enough to render them “not worth it“?

Let’s take a look at how solar panels work, what their ideal conditions are, and whether snow and cloud are really a problem for this renewable energy source. To start collecting free quotes for solar panels, enter your details into this quick form, and our suppliers will be in touch.

What’s in this guide to solar panel costs?

How do solar panels work?

We won’t mince words here – the science behind solar panels is complicated and confusing for those of us who aren’t engineers. So we’re going to do our best to make it as simple as possible, for your sake and ours.

So the sun emits heat and light – this much we all know. And light, you may also know, is made up of tiny particles called photons. Meanwhile, every solar panel is essentially a magnetized sandwich, with each slice of “bread” being a sheet of densely packed atoms. When photons from the sun hit a solar panel, the design of the panel causes the photons to knock electrons off of these atoms. This generates an electric current, which then powers your house or gets stored in a battery.

What is a solar inverter?

Every solar panel produces direct current (DC) electricity, but your house requires alternating current (AC), which is why you need a solar inverter. This clever bit of kit converts DC into AC, so you can use it to power your home. Your two options are a string inverter or a micro inverter, but which should you choose? 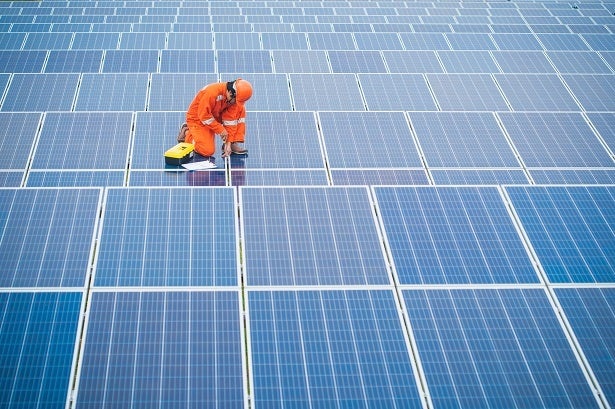 Micro inverters operate as a team. Each of your solar panels is assigned an individual micro inverter, which means the DC-AC conversion happens at the point of energy creation, rather than at a later stage. With micro inverters installed, a weak performance from one of your panels will not affect the rest of them.

Given that micro inverters have to deal with significantly lower voltages, they tend to last much longer than string inverters (i.e. 20 or so years, instead of 5-10). When you do eventually need to replace your micro inverters, it’s about £50-£100 per unit, so it would cost about £1,500 to refit a 14-panel system with new ones.

What are solar panels made of?

Perhaps you’re curious as to how these things are actually put together.

Each solar panel is made up of approximately 32-48 solar cells, which are in turn made from a semiconducting material called silicon. Most panels either use monocrystalline or polycrystalline silicon, “mono” offering a higher level of performance than “poly”.

The solar cells are then connected together using soldered metal, creating an impressive matrix-style structure. If that’s the sandwich filling, all you need now is the bread. A layer of glass (approx. 7mm thick) goes on top, and a polymer-based backsheet goes on the back. Stick on a strong aluminium frame with EVA glue, and you’ve got yourself a solar panel.

For more information, check out our guide to the three main types of solar panel.

That’s where it gets a little tricky. No one could blame you for thinking that a solar panel does its best work on a hot summer’s day. However, seeing how complicated these devices are, you can assume they’re pretty capable of functioning in different types of weather.

Part of this is true. Solar panels (obviously) need the sun to operate; the more sun that shines down onto the panel, the more efficient it will be at producing energy. That much is easy to figure out.

The surprising part is that solar panels are actually less efficient in intense heat. Yes, we know – a device that operates best in direct sunlight is impeded by high temperatures. It’s certainly a bit of a design flaw – perhaps an obstacle for future solar panel generations.

It doesn’t take much heat to start lowering a panel’s efficiency. In fact, all solar panels have a “Pmax temperature coefficient.” This refers to the amount of power a solar panel will lose as the temperature rises 1°C above 25°C.

We’ve found Pmax numbers for some of the bigger solar panel models and listed them here.

As you can see, a solar panel in 26-27°C won’t have a noticeable drop in output – but in a place like Nevada or Egypt, the sweltering heat would reduce a panel’s efficiency by a considerable amount.

People in the UK are no strangers to cloudy weather, but does this mean that they shouldn’t consider solar panels?

The idea that “solar panels stop working on cloudy days” is a common misconception. Remember that light is a spectrum, and solar panels want all of it. While clouds can obstruct visible light, there are still multiple different wavelengths of light that can penetrate through even the thickest of cloud.

After all, when clouds coat the sky, it’s not like we’re all stumbling around in darkness – it’s very much still bright. That means your solar panels will still be getting suitably juiced up throughout the day.

There’s also the ‘edge-of-cloud’ effect, a bizarre phenomenon that causes clouds to intensify the strength of the sun’s light. Just as a cloud starts to pass in front of the sun (or just as the sun starts to emerge from a cloud), something very special happens. The sunlight actually refracts as it glances off the edge of the cloud, causing a sudden boost in its intensity.

So, while the fluffy centre of a cloud might not be ideal for your solar panels, the wispy edges are basically like big magnifying glasses.

Do solar panels work in snow?

Even though we don’t get blizzards upon squalls in the UK, snow can still rear its head when you least expect it, in months as late as April. The thing is, snow is the worst possible environment for solar panels. It can cover the panel entirely, meaning no light gets through, and if enough snow piles up, it can break the panel altogether.

To make sure you know what kind of chilly punishment a solar panel can take, we’ve taken some of the bigger solar panel brands and had a look at how much snow their top models claim to be able to handle.

Firstly, if the unit “pascal” means nothing to you, then you should know that one pascal is equal to one newton per square meter. And if you don’t remember your Year 7 science lessons, a newton is the amount of force needed to accelerate a one kilogram mass at the rate of one metre per second squared.

1 Pa is approximately 0.1 kg/m². This means that panels with a 6,000 Pa load can handle 611.8kg/m² of snow before something goes wrong. Panels with a 5,400 Pa maximum can take 550.6kg/m². As you can see, this is a lot of snow – more than we’re ever likely to get over the course of one night. Even if we do experience a cold snap, it won’t be hard to brush some snow off every day to minimize the risk of damage to your panels.

The best conditions for solar panels

You can’t control the weather, but there are four key things you can do to ensure you get the best out of your solar panels.

The direction that your solar panels are facing is the number one most important factor when setting up a solar PV system. If there’s a portion of your roof that’s south-facing or even southwest/southeast-facing, this is where your panels should be going. Since the sun rises in the east and sets in the west, south-facing panels have the best chance of capturing the most sunlight across the day.

Solar panels always operate at maximum performance when the sun is directly perpendicular to them. You want the sunlight to be hitting your panels as directly as possible. In the UK, this basically means that a 30-45° angle is ideal.

Obviously, as the sun changes its position in the sky throughout the year, the optimum angle for your solar panels changes. For example, in the winter they should be positioned at a steep 60°, while in the height of summer a low 20° is best. However, once your panels have been installed, it’s not that easy to readjust the angle every few months (unless you hire a professional installer to do it for you).

That’s why 30° is the recommended permanent position for your panels.

There’s no point in getting the perfect direction and angle for your solar PV system if it’s just going to sit in shade. Be sure to clear away anything that might cast a shadow on your panels, particularly any big trees. If the obstruction is in your neighbour’s garden, you’ll just have to ask them nicely, or reconsider where your panels are going.

As dust and dirt build up on your panels, this will gradually make them less effective. The sunlight will find it harder to reach the solar cells beneath the grime, and consequently you’ll have less electricity to use at home.

Naturally, the best thing to do is to keep your solar panels clean. Manufacturers recommend that you give your panels a scrub once or twice a year, and you can either do this yourself, or pay approximately £100 for professionals to do it for you. Of course, rainfall in the UK helps to keep solar panels pretty clean, but there’s only so much lichen, plant sap, and bird droppings that rain can run off.

The vast majority of residential solar panels typically come with a 25-year warranty, although they are built to last around 40-50 years.

Fortunately, solar panels have no moving parts, so the risk of something breaking is extremely minimal. This can make maintenance costs as low as £0 for decades at a time (other than the cost of replacing the inverter, and a little bit of cleaning). Insure your solar panels, though, just in case.

If you think that the switch to solar sounds like the right move for you and your household, we can help. Simply fill in this short form, and our professional installers will be in touch with their quotes.