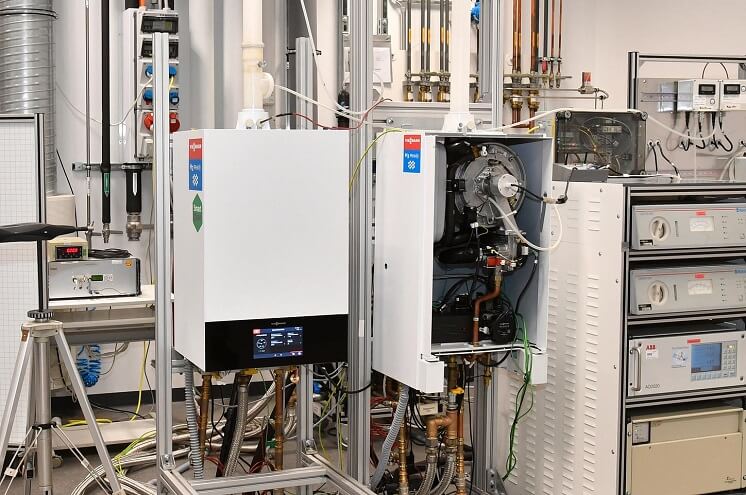 As it stands, hydrogen isn’t that popular in the UK – but it’s set to become one of the most common forms of home-heating fuel in the next decade.

Britain currently produces around 27 terawatt-hours (Twh) of hydrogen per year, mostly from fossil fuels. This is 10 times less than the amount needed to meet the government's net-zero emissions goal by 2050.

But this is all predicted to change, thanks to the UK Hydrogen Strategy – a government plan that will gradually introduce hydrogen into households in a few years’ time.

Soon, hydrogen boilers could become commonplace in British homes. Want to get ahead of the curve and learn more about these eco-friendly appliances? Read on to find out everything you need to know.

What is a hydrogen boiler?

A hydrogen boiler’s purpose is pretty self-explanatory – it burns hydrogen (as opposed to natural gas) to heat a property.

Similar to gas boilers, these appliances work by burning the hydrogen via combustion. This creates hot flue gases that can be used to heat water, and can also be stored for later use, ready to be pumped around your radiators.

But why use hydrogen instead of gas?

Well, first and foremost, it’s better for the planet, since hydrogen releases fewer emissions compared to gas and oil. It should also cost homeowners less to heat their properties, because they’ll be able to avoid rising gas prices.

Swapping to a hydrogen boiler can be pretty easy for homeowners to do – some could even avoid having to introduce a whole new heating system. Although some parts of the boiler might be slightly different to a traditional boiler, (namely, the flame detector and the burner), overall, it works in the same way as a gas boiler.

What is a hydrogen-ready boiler?

A hydrogen-ready boiler essentially makes the transition to hydrogen even easier by being able to burn both natural gas and hydrogen.

This means that when the UK’s gas network is ready to switch from methane to hydrogen, you won’t need to replace your gas boiler.

When hydrogen can eventually be introduced into the gas network, it’s likely that it will be phased in with a blend of hydrogen and gas, rather than immediately switching from one to another.

The HyDeploy programme – currently taking place at Keele University – has suggested that if a 20% hydrogen and 80% natural gas blend is introduced, no alterations would need to be made to the majority of UK boilers. Their current aim is to bring this blend to UK households by 2025.

Whether this approach will work on a large scale is still being discussed, but many believe it could be one of the main ways to decarbonise the UK.

How is hydrogen made?

To produce hydrogen, you need to separate it from the other elements – but when it’s being created as a source of fuel, there’s more to it than that.

There are actually a lot of different ways to produce hydrogen fuel, with each method being labelled on a colour spectrum – which is ironic, considering it’s a colourless fuel.

There are many different ‘colours’ of hydrogen – including green, blue, brown, yellow, turquoise, and even pink – with the most popular types being green and blue. But what’s the difference?

What is green hydrogen?

‘Green’ is the most eco-friendly form of hydrogen because it’s produced with no harmful greenhouse gas emissions.

It’s made by using clean electricity from surplus renewable energy sources, such as solar or wind power, to electrolyse (a chemical reaction) water. Although it sounds complicated, it’s pretty simple – electrolysers use a chemical reaction to split water into its components of hydrogen and oxygen.

Although this method is the most eco-friendly, it’s pretty expensive, which is why green hydrogen currently only makes up a small percentage of overall hydrogen production.

What is blue hydrogen?

Unlike green hydrogen, blue hydrogen doesn’t completely avoid the creation of greenhouse gases, which is why it’s usually described as ‘low-carbon’.

This type of fuel is created mainly from natural gas, using a process called ‘steam reforming’ – this brings together natural gas and heated water in the form of steam, to create hydrogen.

Unfortunately, carbon dioxide is also a by-product of this method. This means that, if blue hydrogen is going to be a form of green fuel, carbon capture and storage (CCS) also needs to be used.

Where is hydrogen made in the UK?

Although hydrogen isn’t popular in the UK yet, energy companies have cottoned on to its potential and have ramped up its production.

Located in Sheffield, ITM Power is a major player in the hydrogen industry thanks to its electrolyser manufacturing facility, which is the largest in the world. Surrey’s AFC Energy also has its own Hydrogen Power (H-Power) system, which is free of pollutants and greenhouse gases.

There are also other renewable energy companies that have only recently expanded their horizons to include hydrogen. Ceres is one key example – it has just earmarked £100 million to develop a solid oxide electrolyser (SOEC) to work on hydrogen electrolysis cells.

How much does a hydrogen boiler cost?

However, many manufacturers are confident they won’t cost any more than natural gas boilers. And because they work in a very similar way, there shouldn’t be any big extra costs when it comes to installation and maintenance.

To give you a rough idea of how much gas boilers currently cost, check out the table below:

Advantages and disadvantages of hydrogen boilers

How common are hydrogen boilers in the UK?

In fact, the government has estimated that hydrogen could cover 20-35% of the UK’s energy consumption by 2050, providing a clean alternative to oil and gas in energy-intensive industries, like power and transport.

What is the UK Hydrogen Strategy?

In a bid to reduce the country’s emissions, the government has released the UK Hydrogen Strategy.

The main goal of the plan is to make hydrogen more available and less expensive for businesses and homeowners around the UK.

As it stands, low-carbon hydrogen is pretty expensive compared to fossil fuel alternatives, but the government’s strategy states that it will significantly cut the costs by introducing a “similar premise to the offshore wind contracts for difference (CfDs)”.

This means contracts with hydrogen producers will include a payment, which will bridge the gap between the high costs of producing low-carbon hydrogen and an affordable purchase price for industries.

The strategy also states that this business model will be finalised in 2022, and the first contracts will be allocated from the start of 2023.

What are the alternatives?

The government’s Boiler Upgrade Scheme, which will begin in April 2022, makes heat pumps an excellent alternative to hydrogen and gas boilers.

Instead of warming the air like a traditional boiler, infrared heaters warm people and objects directly, which re-radiates the warmth back into the room.

The system works by emitting infrared from the heater, which then travels through the air until it hits an object. The object then absorbs the radiation, causing molecules within it to vibrate and produce heat.

Although infrared heating is fairly new to the domestic and commercial heating scene, you can bag yourself a panel for about £79 – larger ones, however, will be in the £300-£400 range.

Plus, infrared heating running costs are far less than that of conventional boilers.

Although these materials release carbon dioxide when burned, it’s considerably less than the amount released by fossil fuels.

A district heat network – also called district heating – is essentially an underground system of insulated pipes that takes heat from a central source and delivers it to a number of domestic or non-domestic buildings.

And, since the annual cost of district heating is roughly 19% lower than the cost of a natural gas boiler, you might want to get on board with district heating before others start to cotton on.

Hydrogen is set to take the UK by storm. By 2050, we can expect it to supply 20-35% of the UK’s energy generation, which will help us reduce our carbon footprint and heat our homes efficiently.

In the meantime, there are plenty of other eco-friendly forms of heating available for UK homeowners. Heat pumps, in particular, are soaring in popularity since the government announced the Boiler Upgrade Scheme.

Want to learn more about heat pumps? Check out some of our guides below: