Get free quotes for a heat pump

Switch to a heat pump 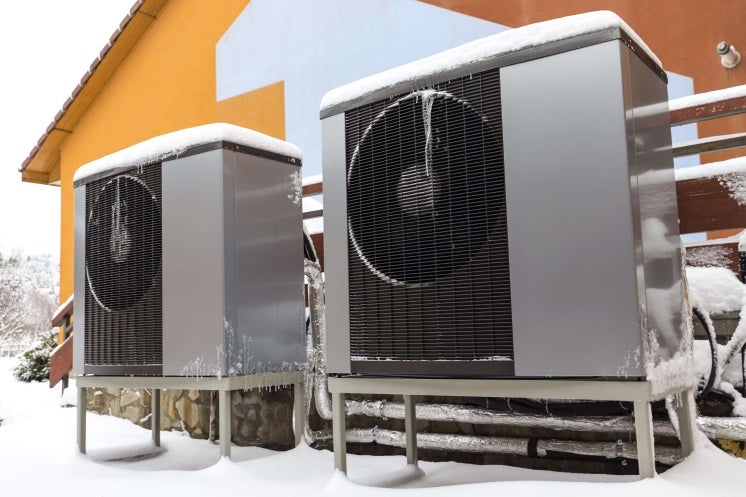 Whether you want to significantly reduce your energy bills, avoid falling victim to another gas price spike, or help save the climate – or all three – getting a heat pump is a wonderful step in the right direction.

A heat pump won't cost more than a gas boiler over its 20-year lifespan, it'll cut your annual carbon footprint by a massive 44%, and it'll allow you to eliminate your reliance on gas.

We’ve explained everything you need to know about air source heat pumps and their ground source counterparts, and laid out the reasons why you should choose one over the other.

Want to skip the reading? You can compare the best heat pumps by popping a few details about your home in our easy-to-use quote tool. We’ll pass on your details to our expert suppliers, who’ll get in touch with you with free quotes.

What is a heat pump?

A heat pump is a renewable energy device that takes warmth from the outside world, and uses it to heat – and sometimes cool – your home.

Even when it’s below freezing outside, this machine takes heat from the air, the ground, or occasionally a body of water, and converts it into a fluid.

It heats up this fluid even more with a compressor, before it sends it to your home’s heating and hot water networks – or, if you like, uses it to warm up your swimming pool.

You can think of a heat pump as the opposite of an air conditioner, which takes heat from inside your home, cools some of it, and directs the rest outside.

A heat pump runs on electricity, meaning that its ability to save the planet depends on how renewable your country’s electricity mix is.

2020 was the first year that the UK generated more of its electricity through renewable sources (42.9%) than through fossil fuels (38.5%), according to government data, so it looks like heat pumps are only getting better for the climate.

What’s the difference between air source and ground source?

The biggest difference between the two main types of heat pump is that one absorbs the natural warmth contained in the air, while the other takes in the warmth generated underground.

That means the installation process is different for the two machines. Ground source heat pumps need to be connected to underground pipes which absorb the Earth’s geothermal energy.

If there’s room, an installer will fit a horizontal pipe about a metre under the ground’s surface. If you have room for 30m to 50m of pipe to snake its way under your garden, you should go for this cheaper option.

If there isn’t enough room in your garden, the installer will drill directly down, creating boreholes that usually extend between 90m and 160m into the ground. This allows them to reach a warmer section of the Earth, reducing the amount of piping you’ll need.

If that sounds like a lot, it is – but remember that the land we live on goes down to depths of at least 25km.

Apart from the extra set of pipes, you won’t notice much difference between the two kinds of heat pumps.

Both send hot water to your radiators (and underfloor heating, if your home has it), and both require you to have a cylinder in your property to store the spare hot water they produce.

Both heat pumps also come with a machine that has to be fitted just outside your home, connected to pipes that channel hot water into the property.

Which type of heat pump is cheaper?

This lessens the gap in price between the two, but ground source heat pumps will still be more expensive, on average.

When it comes to running costs, the two types of heat pump will cost the same, on average.

Air and ground source heat pumps use around the same amount of electricity to warm your home up, so your energy bill will be the same either way.

Which type of heat pump is more efficient?

Ground source heat pumps have a head start on their air-reliant counterparts when it comes to efficiency, as the temperature underground stays between 10 and 13°C throughout the year.

In contrast – as we all know – the UK’s air temperature varies dramatically between winter and summer, and often over the course of a single day.

Plus, air source heat pumps have to work harder to gather warmth from the air during winter, meaning they’re less efficient when they’re most used.

However, over the course of the year, they’re still just as efficient as their ground-based rivals.

Both have a typical efficiency rating of 300% – which is three times better than the average gas boiler.

Pros and cons of an air source heat pump

Pros and cons of a ground source heat pump

Which type of heat pump is best for you?

The kind of heat pump you choose depends on how much space you have outside, how much money you’re willing to spend up front, and the deal you can get on your favoured heat pump.

Ground source heat pumps usually last five years longer, so you should buy one – as long as you can get a serious discount, and as long as you have enough space outside for a winding series of horizontal pipes.

Opt for an air source heat pump if you don’t have enough room in your garden, or if you’ve just found a much better price, which is highly likely.

Either way, if you install your heat pump from April 2022 onwards, you’ll benefit from the government’s Boiler Upgrade Scheme.

The scheme will subsidise your heat pump installation by £5,000, which allows you to heat your home for the same cost as a gas boiler – and with a 44% smaller carbon footprint.

If you want to take advantage of this scheme before funding is withdrawn, just fill out this short form and our expert heat pump suppliers will be in touch with free quotes for you to compare.