Home » Boilers » The UK Gas Boiler Ban: Everything You Need To Know 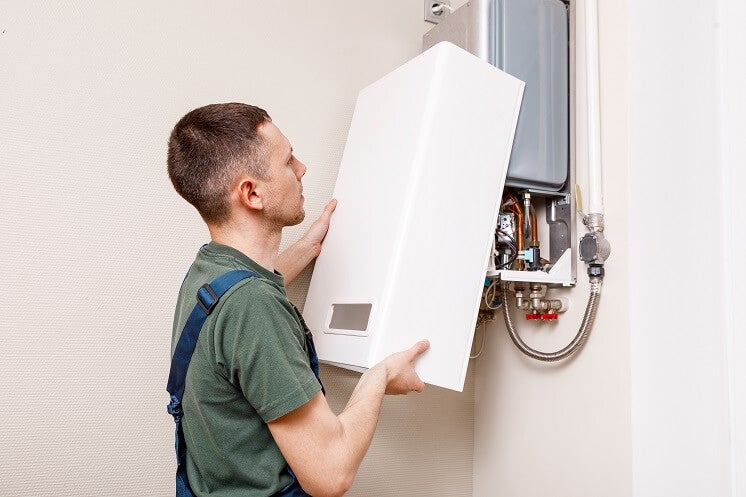 ✔ By 2025, gas boilers will be banned from newly built houses

✔ By 2035, the UK will phase out all gas boiler installations

In a bid to reduce emissions, the UK government has announced a ban on gas boilers – and it’s caused quite the controversy.

Since 14% of UK emissions come from domestic energy use (Climate Change Committee, 2019), banning gas boilers is a major move to help the country hit its net zero by 2050 target. And given the global gas shortage that’s causing a number of energy firms to go bust, a move away from gas can’t come soon enough.

Worried about how you’ll heat your home without a gas boiler? Scroll down to find out everything you need to know about the boiler ban, including when it’s coming into place, who it’ll affect, and which alternatives homeowners can use.

You can also get ahead of the game by looking at different boiler options – which is where we come in. To compare boiler prices, all you have to do is pop a few details in our easy-to-use tool, and we’ll put you in touch with experts in the area who will give you free boiler quotes. This way, you’ll find the best deal for your property.

What’s in this article?

When are gas boilers being banned?

In 2021, the government released its Heat and Buildings Strategy, which outlines the changes that will come into place over the next few years to make UK buildings more environmentally friendly.

When it comes to banning gas boilers, the strategy is split into two phases, which we’ve outlined below.

From 2025, gas boilers will be banned from all new builds. However, the government’s plans are still very early days, which means this rule isn’t 100% cemented just yet.

When it comes to making all new builds low-carbon by 2025, the Heat and Buildings Strategy simply states that the government will “consult on ending new connections to the gas grid”.

In addition to the 2025 goal, the Heat and Buildings Strategy also states that it's aiming to phase out the installation of natural gas boilers beyond 2035.

This means that if your boiler goes kaput after 2035, you’ll need to install a low-carbon alternative, rather than a new gas or oil boiler.

Why is the government banning gas boilers?

As countries around the world continue to pump emissions into the atmosphere, climate change is getting worse. That’s why the UK has set out to be net zero by 2050 – and banning gas boilers is just the first of several steps designed to help reach this goal.

According to the Climate Change Committee, around 14% of UK greenhouse gas emissions come from domestic energy use – mostly from our gas boilers keeping us toasty. But if we want our country to be net zero by 2050, we need to drastically reduce this figure.

How will you be affected by the gas boiler ban?

No one will be affected by the gas boiler ban just yet. But anyone who moves into a home built from 2025 onwards will have to use low-carbon heating methods. Thankfully, the government has suggested that these new builds should already have low-carbon alternatives installed.

Anyone building their own property from 2025 onwards will also have to consider installing low-carbon heating options themselves. If this applies to you, make sure to check out any government grants that are currently available for UK homeowners – you could get up to £6,000 off a ground source heat pump by using the Boiler Upgrade Scheme.

Will you have to stop using your gas boiler?

Since 85% of UK homes are still heated by carbon-heavy natural gas, the gas boiler ban will end up impacting most Brits eventually – but the changes for existing homes won’t be brought in until 2035.

What are the alternatives to gas boilers?

Although this transition to different heating systems might sound intimidating, over the next few years, low-carbon heating methods will become more common – and hopefully more affordable – for homeowners.

In the Heat and Buildings Strategy, the government is keen to point out that “the move to low-carbon heating will be a gradual transition, from niche product to mainstream consumer option.”

Below, we’ve listed some of the more promising alternatives to gas boilers for UK homeowners.

There are two main types of heat pumps: air source and ground source. Air source heat pumps take air from outside and use it to power your home’s heating and hot water systems, whilst ground source pumps absorb geothermal heat from the ground.

Since neither of these systems rely on fossil fuels, they’re much better for the environment than gas or oil boilers – the prime reason why the UK government is encouraging more homes to switch to them.

Depending on which type of heat pump you go for, the upfront cost for purchase and installation can be anything between £6,000–£35,000. Bear in mind that you can get up to £6,000 off your heat pump by using the Boiler Upgrade Scheme – a government scheme for homeowners in the UK.

We won’t beat around the bush: compared to a gas boiler, the upfront cost of a heat pump is pretty steep. However, users will typically save £2,827 over the heat pump’s lifetime – not to mention roughly 20 tonnes of CO2.

Infrared panels are pretty new to the UK heating scene, but have a promising future ahead of them.

Unlike gas boilers, infrared systems heat objects directly, rather than warming the air in a room. Panels propped up onto the walls or ceilings channel radiation to specific areas of the property. Although the word ‘radiation’ might trigger warning signals in your mind, rest assured that this heating method is 100% natural and risk free.

An infrared panel system for a three-bedroom house should cost around £2,000–£2,500, but this can fluctuate since you’ll need at least one panel for each room.

As well as reducing home emissions, infrared heating can lower heating costs by 30-50% – but this will depend on the construction of your home, the property’s ceiling height, and how well insulated it is.

Users should bear in mind that, to fully replace the functionality of a boiler, infrared panels need to be paired with an air-sourced hot water cylinder.

A district heat network does what it says on the tin – it’s an underground network of insulated pipes, which take heat from one source and deliver it to different buildings in a specific area.

While the pipe network itself is usually the same across different systems, the heat sources can vary. There are some facilities that provide a dedicated supply to the heat network, such as a combined heat and power plant, and others that provide heat recovered from industry and urban infrastructure.

A key example of this is Bunhill 2 District Heating Network – a system in North London, which uses unwanted heat from the London Underground to heat homes in Islington.

Hydrogen boilers are very similar to gas boilers, except they burn cleaner fuel.

A major benefit of hydrogen boilers is that they work in exactly the same way as gas boilers – by burning the hydrogen via combustion – so homeowners shouldn’t take long to adjust to them. Hot flue gases can then be used to heat water and radiators, or they can also be stored for later use.

When it comes to costs, things are a little murky for hydrogen boilers, since they’re still in the prototype stage. However, many manufacturers are confident they won’t cost any more than natural gas boilers.

So is this boiler ban news worth celebrating? Although gas isn’t as bad as coal and oil, it’s still one of the fossil fuels that’s stoking the fires of climate change. So yes, this change to home heating is good news.

It’s also evidence that the UK government is finally taking renewables seriously – a stance made clear in 2019, when the UK surpassed the milestone of sourcing more power from renewables than from fossil fuels.

What does this mean for the UK?

However, for some households, it’ll also mean forking out a few thousand pounds to replace their old gas boiler – something not everyone can afford to do. This is why the government has started rolling out grants to support more homes during this transition – but whether this support is enough is still up for debate.

We’re stepping into a new era – one where fossil fuels are dying out, and renewables are increasing. This new gas boiler ban will not single-handedly rescue us from climate change, but it’s certainly a step in the right direction.

If the new gas boiler scheme doesn't affect you yet, but you’re still interested in a new boiler, then you’ve come to the right place.

Our local suppliers can provide you with quotes to compare the best prices – all you have to do is pop a few details in this short form.