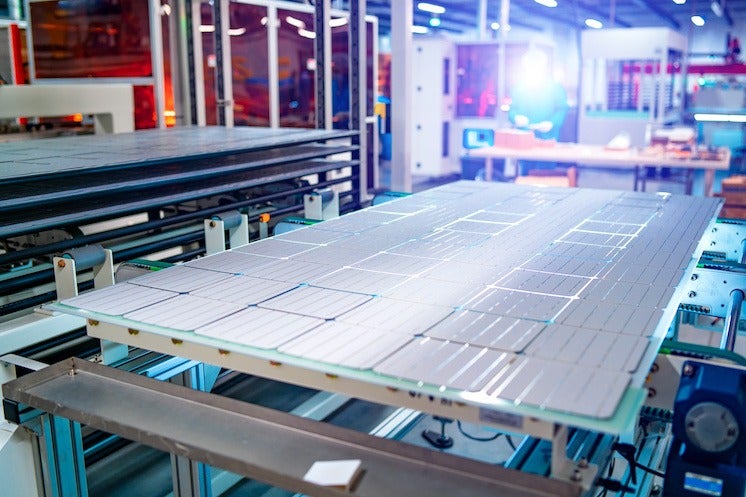 Disclaimer: this page is not a guide to making your own solar panels. We’ve already discouraged the idea of DIY installations – god forbid you start melting down silicon in your back garden.

You should be on this page out of pure curiosity, and nothing else.

So how are people actually putting these things together?

What are solar panels made from?

Solar panels also comprise a rubber or vinyl backsheet, an aluminium frame, and metal wiring – but the key ingredient here is silicon.

Fortunately, silicon is the second most common element in the Earth’s crust. However, you don’t really find pure silicon out in the wild. People mine silicon dioxide (SiO₂), otherwise known as quartz, which isn’t much more difficult than scooping up sand.

The world’s biggest producers of silicon are China, Russia, and the US.

Why do solar panels need silicon?

The widespread availability and low cost of silicon aren’t the key reasons we use it for our solar panels, but they certainly help.

Pure silicon is a very good semiconductor, which means its ability to conduct electricity is bang average – halfway between a conductor (like most metals) and an insulator (like glass).

This might seem unideal, but silicon’s semiconductor status means it can be given a positive/negative charge, which is instrumental in generating electricity in a solar panel.

A three-step guide to how solar panels are made

Currently, monocrystalline and polycrystalline solar panels heavily dominate the market, and they share a very similar manufacturing process. Here’s how it goes.

As we’ve said, you can’t find pure silicon in nature, so the silicon dioxide needs to be purified in a manufacturing plant. The rocks of solid quartz are melted down in a very hot furnace, and the oxygen is extracted to create impure, molten silicon.

To purify the silicon, a rod of impure silicon is passed repeatedly through the middle of the molten silicon. This rod drags all the impurities with it, so that they all gather at one end. The impurities are then simply removed, leaving pure, molten silicon.

However, pure silicon is an insulator. To turn it into a semiconductor, it needs to be given positive and negative charges, in a process known as doping. To create the positive charge (P-type doping), boron or gallium is added to the silicon. The negative charge is added a bit later on.

2. Cutting the ingots into wafers

Imagine a professional chef finely chopping a carrot. That’s basically what happens next, except it’s a robot with a wire saw.

These bulky ingots of silicon need trimming down into paper-thin wafers (or ‘solar cells’). Cleverly, the wafers are usually cut into rectangular or hexagonal shapes, ensuring that they slot together neatly later on.

Once the wafers are ready, it’s time to apply the negative charge. The P-type doping has already happened in the furnace, but the N-type doping involves adding phosphorus or arsenic to the surface of the wafers.

This charges the top layer of the silicon cells with a negative charge, leaving the layers below with a positive charge. This ‘P/N junction’ is primed and ready to create electricity.

Well, almost. Pure silicon is naturally quite shiny, meaning it can reflect as much as 35% of the sunlight that hits it. Before the wafers are ready for the great outdoors, they need to be treated with an anti-reflective coating – either silicon oxide or titanium dioxide. 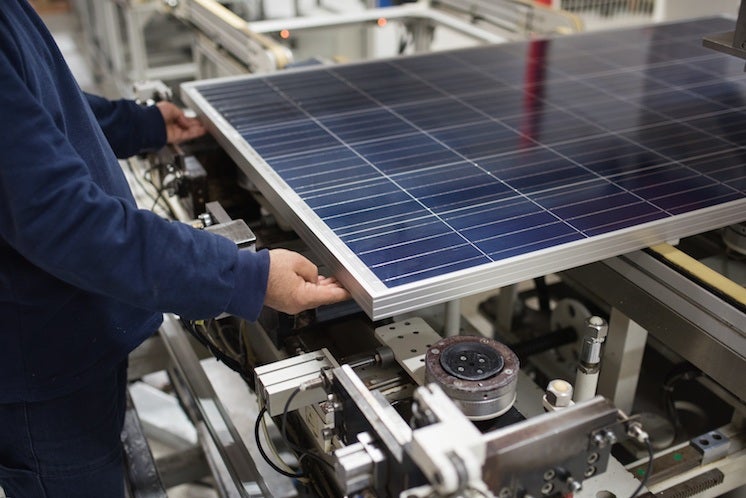 3. Building the solar panel itself

The third and final big step is to group the wafers into teams, and stick them onto a panel.

The solar cells are soldered together in a matrix-like structure using metal connectors, which allows the electricity to travel between the cells and into the solar inverter.

After that, it’s a bit like putting a photo into a frame. You’ve got the important stuff in the middle, a layer at the back to keep it secure, and a glass layer at the front.

Once connected to each other, the wafers are sealed into a backsheet, usually made from highly durable rubber or vinyl. Manufacturers then add a 6-7mm layer of glass on top, and a junction box on the side.

The finishing touch is the sturdy aluminium frame, which gives the solar cells a serious amount of protection, and allows the panel to be mounted on roofs.

There are two ways to answer this question: robots and China.

Yes, the vast majority of solar panel manufacturing is performed by precision-level robots, which is one of the reasons the cost of solar has been driven so low in recent years. Naturally, some machinery still has to be operated by technicians, but it’s an increasingly AI-based affair.

And most of these panel-producing robots are in China. In fact, nine of the world’s top ten largest solar panel manufacturers are Chinese, with the other one based in Arizona.

This is why coronavirus has had such a significant impact on solar panel manufacture. Hit China hard, and you hit solar panels hard.

Is the production of solar panels harmful to the environment?

In short, yes it is – but the positive environmental impact of solar panels themselves completely negates this.

A 2017 study published in Nature Energy showed that only 4% of the renewable energy that a solar panel creates is offset by the energy required to create that panel. So, for each solar panel, you’re still looking at a huge overall gain, with 96% of a panel’s energy coming at zero environmental cost.

What’s more, when a panel finally pops its silicon clogs, it can usually be recycled. Many UK installers now offer solar panel recycling programmes, and this trend is looking to grow.

The future of solar panel production

You’re probably wondering where all this is headed.

Well, the demand for solar panels worldwide is constantly on the rise, so panel production looks set to keep on climbing.

But it might not always be with silicon. Scientists have identified that perovskite is a much superior alternative, as it offers higher efficiency, and doesn’t involve the same complicated P-type and N-type doping process. Plus, perovskite can be made artificially, so it’s cheaper than silicon.

However, the technology is still in its early phases, and perovskite doesn’t work too well in wet conditions – so it’s silicon solar panels for now.

There is also growing demand for transparent solar panels, which involves a slightly different production process. If researchers can crack properly see-through panels, it will completely blow open the potential for solar energy in urban environments.

Lots to keep an eye on!

When it comes to all things eco-friendly and economically savvy, Charlie is a spectacularly woke millennial. A university-educated solar panel scholar with an eye for detail, when Charlie isn’t writing, he’s tucked up in bed watching his favourite black and white film.