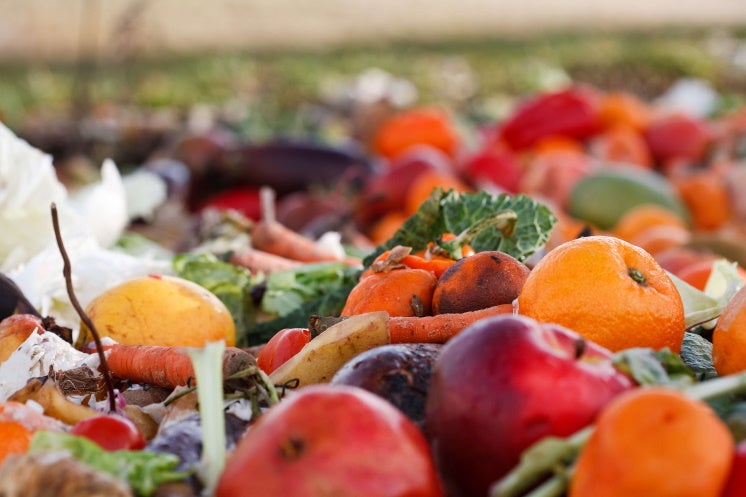 ✔ The UK throws away 9.52 million tonnes of food per year

That’s not just an attractive principle; it’s also a statement of fact.

We produce enough food across the world to wipe out global hunger – but one-third of it goes to waste. That’s 1.3 billion tonnes of food thrown away.

If that food was given to chronically undernourished people, we would have enough to provide them with 10 meals per day, every day.

The UK has cut down on its food waste in recent years – but we still throw away an astounding amount of edible food.

How much food is wasted in the UK annually?

The UK was responsible for 9.52 million tonnes of food waste in 2018, according to a study by the sustainable charity Waste and Resources Action Programme (WRAP).

That amount of food waste could fill 190 Royal Albert Halls, and weighs more than 112 million average British men – which is way more people than live in the UK, let alone men.

This wasted food was disposed of during the manufacture process, by the retail and hospitality sectors, and by households all over the country.

If we exclude the inedible parts of the wasted food, 6.4 million tonnes of completely edible food was thrown away in 2018.

That amount of edible food was enough to create an additional 10.5 billion meals, we’ve extrapolated from WRAP data.

Households alone got rid of edible food worth £13.8 billion.

If you split that between all of the UK’s 27.8 million households, each home would save, on average, £496 per year.

More than 25 million tonnes of greenhouse gases (GHG) is emitted by the food that the country wastes every year, according to WRAP.

That’s 5.5% of our entire national GHG emissions – and more than Kenya, a country of 53 million people – on food that’s simply thrown away.

Considering that this government has set a target for 2030 of reducing GHG levels by 68% of 1990 levels, reducing or even eliminating food waste seems like an obvious step towards that goal.

Wasted household food alone is responsible for 21 million tonnes of CO2e* – and even if you only count the edible food wasted, it comes to a total of 14 million tonnes.

If we eradicated those 14 million tonnes, it would be the equivalent of taking one in five cars off the road, according to the government’s latest data.

What is the most wasted food in the UK?

Potatoes are the most wasted single food in the UK, with 1.6 billion thrown away every year, according to WRAP.

The most thrown away food group in the country is fresh vegetables & salad, which makes up 28% of edible food waste.

Top 10 foods that contribute to food waste in the UK

These are the most wasted food types in the country, according to WRAP.

You’ll notice that potatoes are on the list twice, in different forms. Poultry and pork are also present, despite the fact that producing 1kg of each emits 6kg and 7kg of CO2e respectively.

How much food is wasted in the UK every day?

That’s 391 grams of food per person, per day, going straight in the bin – but that makes children partly responsible, which doesn’t seem fair.

If we just split the total – and blame – among UK adults, that means we waste 498 grams of food per person, per day – the equivalent of getting rid of a pack of pasta every evening.

Average food waste per household per day in the UK

Households throw away, on average, 1.96kg of food per day.

It’s as if at the end of every day, every member of your household came together, presented the 10 potatoes they’d all gathered, and tossed them in the bin.

This adds up to eight meals per week, according to WRAP.

As well as being a horrible use of precious resources, this also wastes money.

On an average day, the average household tosses £1.36 worth of food. Over the course of a year, that adds up to £496.

41% of this food is thrown away because it hasn’t been used in time.

28% is wasted due to personal preferences, and another 25% goes in the rubbish because individuals cooked, prepared, or were served too much food.

Every day, in homes across the nation, this is how much food goes to waste.

If you want to do your part, you can fully organise your household's food consumption, and also consider growing your own food, whether you grow food indoors or outdoors. Both these methods will save you money, and reduce waste.

How much food is wasted by supermarkets in the UK?

The retail sector is responsible for 277,000 tonnes of food going to waste each year – and rising.

The amount of edible food wasted by the retail sector increased by 3.9% in 2018, compared to figures from 2015.

This led major supermarkets including Sainsbury’s, Tesco, and Aldi to sign up to a government-led pledge in 2019, to halve food waste by 2030.

This action is of course welcome, but since retail food waste makes up just 2.9% of the UK’s total food waste, even this pledge won’t make much difference overall.

How much food is wasted in the world?

1.3 billion tonnes of food is wasted every year, across the world, according to the United Nations Food and Agriculture Organisation.

That’s one-third of all food produced for human consumption.

It all adds up to more than three trillion meals wasted over the course of each year.

This is especially staggering when you consider that more than 820 million people suffer from chronic undernourishment – over 10% of the global population.

If the world’s wasted food was given to chronically undernourished people, it would provide each person with 3,659 meals per year, which is 10 meals per day.

Which country wastes the most food?

India wastes the most food of any country on the planet, casting aside 67 million tonnes of food per year, according to a government study.

The other biggest offenders are, naturally, the countries with the biggest populations, but none of them come close to India.

The US is second in the food wastage standings, but is way back at 49.7 million tonnes – while China, Pakistan, Brazil, Indonesia all waste 36 million tonnes or less.

Which country wastes the most food per capita?

The US wastes 95.1kg per person, per year – the highest rate in the world, according to the Food Sustainability Index.

That works out to more than 31 million tonnes of wasted food, every year.

Following just behind the US in terms of food waste is Belgium, on 87.1kg per person, and Canada, on 78.2kg per person.

On the other side of the scale, France consistently tops the world rankings for its lack of food waste, followed by Argentina and Luxembourg.

Food waste in the UK is a problem so large that it’s difficult to conceptualise.

As well as an environmental disaster, the 6.4 million tonnes of edible food we waste every year is also a social catastrophe, considering the 10.5 billion meals this food could have provided to deprived people.

We’re now ranked eleventh for combating food waste in the global Food Sustainability Index, ahead of other wealthy nations like Spain, Australia, and Japan – showing that this issue can be tackled quickly and effectively.

If the UK and the world work to reduce our collective 1.3 billion tonnes of waste, we could eliminate global hunger – and soon.