✔ They absorb the blue part of the sun’s spectrum, unlike silicon

Perovskite solar cells have been breaking solar panel efficiency records since 2018, and they’re not slowing down.

The leader in this field has been Oxford PV (short for Photovoltaics), which is set to bring their cells to market in late 2021.

Consumers will be able to greatly reduce both their carbon footprint and their energy bills – all thanks to perovskite.

We spoke to Dr Chris Case, chief technology officer at Oxford PV, who explained what perovskite is, how it can benefit you, and why it may just save the world. 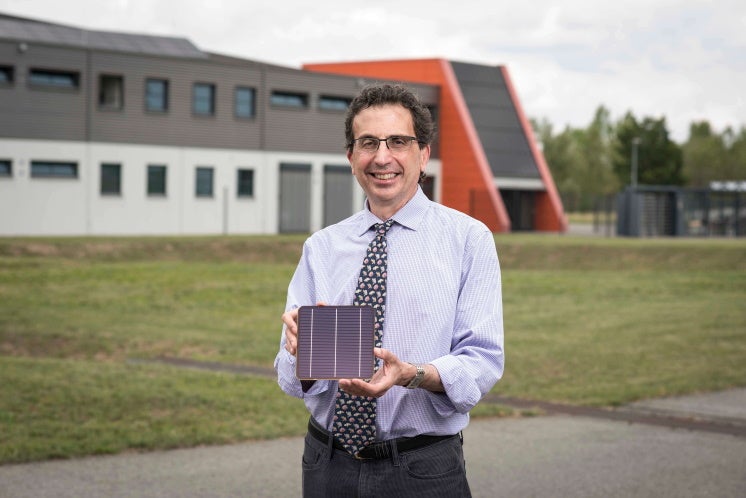 Dr Chris Case by Oxford PV’s factory, with a perovskite solar cell that was made inside

What are perovskite solar cells?

Perovskite solar cells are tandem solar cells which are created when a thin perovskite cell is placed on top of a standard silicon cell.

The perovskite cell is made of synthetic material that’s been modelled on the special crystal structure of a mineral called perovskite.

This structure absorbs sunlight in a different, more effective way than silicon cells.

According to Dr Case, the perovskite cell is much better at using the blue part of the sun’s spectrum.

“The sun has a range of colours that reach the Earth’s surface,” he explained. “The blue and ultraviolet parts give you sunburn, and the red and infrared parts keep you warm.

“The normal, silicon solar cell is good at using the red part. But all the good, high-energy stuff is in the blue part. That’s why it gives you sunburn.”

But why does perovskite absorb the blue part of the sun’s spectrum, when silicon doesn’t?

“You make paint with pigments, and the pigments are chemicals. So white is titanium oxide, and blue is a different kind of chemical, and these chemicals absorb different parts of the solar spectrum.

“This is no different. Our perovskite is a chemical like a paint in terms of its ability; it's just been tailored towards the blue end of the spectrum, and it happens to be good at being a solar cell.

“It's like if you put blue paint on top of red paint. When light comes through, the red photons will pass right through the blue. But the blue photons get absorbed by the blue.”

The history of perovskite solar cells

The perovskite mineral was first discovered by German mineralogist Gustav Rose in 1839, in Russia’s Ural Mountains.

This calcium titanium oxide rock was named for Lev Perovski, a 19th century mineralogist who served in the court of Russian Emperor Nicholas I.

Since the end of the 2000s, modern scientists have attempted to capture more solar energy by replicating the crystal structure found in the mineral Rose unearthed more than 180 years ago.

In 2009, University of Tokyo researchers started the ball rolling by creating a perovskite cell with 3.8% efficiency.

Solar scientists rushed to develop the technology, and in 2012, Oxford PV founder Henry Snaith and Mike Lee created a cell which raised the bar to around 10% efficiency.

In 2014, Korea University of Science and Technology created a perovskite solar device with 20.1% efficiency.

From humble beginnings, the technology had become better than regular panels – which generally have 15-18% efficiency – in just five years.

Since then, the efficiency record has been broken by teams in the US, South Korea, Switzerland, China, the UK, and Germany.

And there’s so much more to come.

The current state of perovskite cells

In 2018, Oxford PV broke the world record by demonstrating its perovskite-silicon tandem cells could work at 28% efficiency – around one-third more than current standard PV panels.

As well as breaking the record, this feat also smashed preconceptions about solar power’s ceiling – and that’s just the start.

Oxford PV, which started in an Oxford University laboratory, wants to start manufacturing what would be the world’s most efficient consumer panels by the end of 2020, and start selling them in 2021.

Dr Case told us the cells could be “potentially 50% more efficient” than current panels, but said that for the moment, “we’re getting about 20%.”

He added: “That’s a big jump, because in this industry, even a percent is a big jump.

“We’re talking about terawatts of energy, so a percent is like a whole power plant. It's like the nuclear reactor that they're trying to build in the UK.”

The product is reportedly robust, too. Oxford PV has stated that the cells are being engineered “to meet customer expectations of 25 years field life and warranty.”

And thankfully, other institutions are getting into the perovskite game, and making huge strides of their own.

And in August 2020, the US Department of Energy announced it had committed $20 million (£15.2 million) to develop perovskite solar PV technology.

“Perovskites are a promising solar technology that could help us reach the next level of innovative and efficient solar power.”

What is the potential of perovskite?

There are many theoretical advantages to using perovskite to create more effective solar panels, from slowing climate change to cutting energy bills.

Here are the various ways that perovskite could change our world for the better. If everything works out, it will fulfil all these examples of its potential.

Speed up the global shift towards renewable energy

The move towards renewable energy has been rapid in recent years, especially in Europe and the US.

More and more people are now grasping that destroying the planet will cause climate change to accelerate, pandemics to spread, and animals to go extinct in unprecedented numbers.

And yet, only 11.5% of energy consumed is renewable, according to Our World in Data. Perovskite solar cells could turbocharge this shift towards a greener future.

Dr Case explained: “The growth in solar is 20% per year, on average. That's a big number.

“But if you make it cheaper, you can make that growth rate faster. And when it becomes cheaper than other sources, you can’t really stop its acceptance and adoption.”

He said this shift would be even more dramatic in parts of the world without entrenched energy systems that rely on fossil fuels.

“Reach outside of the West, and go to countries where there is no energy infrastructure. There's nothing to resist it,” said Dr Case.

“Why should they start with something archaic, that pollutes the world, like coal, when they can begin with something like PV? And that's why the rest of the world will do that.”

Dr Case, who has a Masters in engineering and a PhD in materials science, predicted companies would soon stop producing oil, which is currently the most commonly used fossil fuel in the world.

“All the oil companies will get out of the energy business,” he said. “Or they’ll get in the solar business.

“In the end, the resistance of big oil companies will just be worn out. What our technology will do for everybody is make solar adoption faster.”

Save million of tonnes of CO2

Eliminating oil from the world’s energy consumption would be a seismic shift in the fight against climate change, and shifting 50% of global energy to solar power would cut 15.6 billion tonnes of CO2 worldwide.

And there’s more. Dr Case observed that perovskite cells are so small that virtually no material is needed.

“Last year,” he explained, “the combination of wind and solar capacity was a terawatt. But we need basically 40 times that if we're going to transform everything to renewable.

“That’s a lot of glass, so I did a quick calculation: we would save 25 billion kilograms of glass for every terawatt of PV that gets installed, if it uses our technology.

“Then I recomputed that in CO2. It’s roughly 1kg of CO2 for 1kg of glass, so it would save 25 million tonnes of CO2 per terawatt of PV.”

If solar power is to become 50% of the world’s energy source, we would need roughly another 19 terawatts.

By using perovskite cells rather than purely silicon models, we could save 475 million tonnes of CO2 – which is 40 million more than the UK emitted in 2019, overall.

Dr Case told us that Oxford PV’s perovskite cells will cost more initially, but will be much better earners in the long run.

“But they will be cheaper to own; they will return energy that’s cheaper; their return on investment will be faster. So all the economics look good.”

He said the money waiting to be made in perovskite cells would encourage people to adopt the technology.

“It's a strong argument, any way you paint the picture,” Dr Case said. “Firstly, it's the only way to save the planet for the future.

“And so we’re trying to make the reasoning even stronger by making the energy even cheaper.”

Are there any disadvantages to using perovskite?

The main disadvantage is that your solar panels will cost more at first, but the perovskite cells should more than compensate for this over time, with an energy output that’s currently 20% higher than standard panels.

When asked if he could name any other drawbacks, Dr Case said: “Not that we can think of. Absolutely not. I mean, there's nothing in the material that is hard to find.

“The stuff that goes into it is all readily available in large quantities, inexpensively. These are just synthesised chemicals from common elements.

What is perovskite solar paint?

Perovskite solar paint is another way of using the perovskite structure to gather solar energy.

Researchers spray a paint containing perovskite material onto silicon cells, to make them better at harnessing the sun’s rays.

It’s a quick process, to the extent that it could potentially be scalable to an industry-wide level – if and when it’s been perfected.

Scientists at Sheffield University released a paper in 2014 which showed they had reached 11% efficiency with their solar paint, and the research has continued apace since then.

In April 2020, a Sheffield University team led by the same researcher, Professor David Lidzey, published a paper in Nature which proved they had reached 19.4% efficiency in a small area.

The technology for perovskite solar paint isn’t quite there yet, but it’s come astonishingly far in just six years.

Oxford PV is planning to launch perovskite solar cells in 2021, and if you can afford to spend a bit more up front, there’s every reason to take advantage of this new technology.

It’ll save you money, it’ll cut your carbon footprint, and it will contribute to a better life for billions – plus it should make your home more saleable, with 65% of people likely to buy a house with solar panels.

If perovskite solar cells become the primary source of energy for developing nations, global inequalities could be massively reduced.

Dr Case explained: “When you build everything from electricity, other challenges disappear.

“In some places, energy poverty is a disaster. There's still 940 million people without access to electricity.

“This solves all those problems. Everybody can have power, internet, water, refrigeration, air conditioning, heat, and light.

“What else could you ask for?”