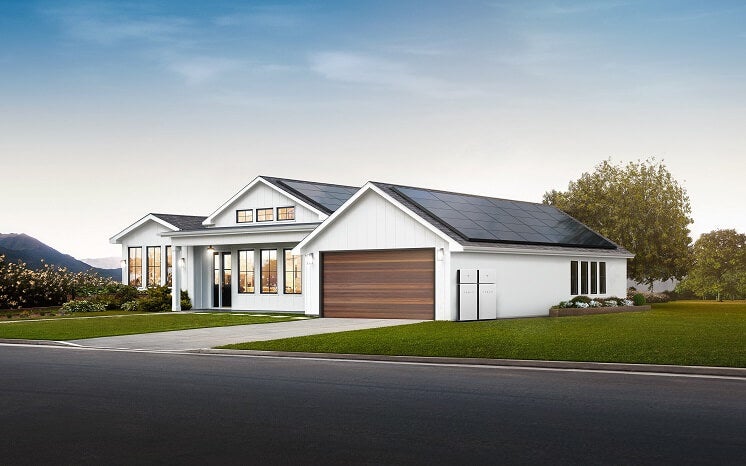 Tesla, it turns out, is more than just fancy cars. But are their solar panels actually worth it? Let’s find out.

Bear in mind that Tesla’s Solar Roof and solar panels are currently unavailable in the UK. In the meantime, if you’re after more affordable (and just as efficient) solar panels, we can help.

Use our quick comparison tool to receive free solar panel quotes and find the best deal for you. All you have to do is fill out a few simple questions about your property, and we’ll get you in touch with our suppliers. 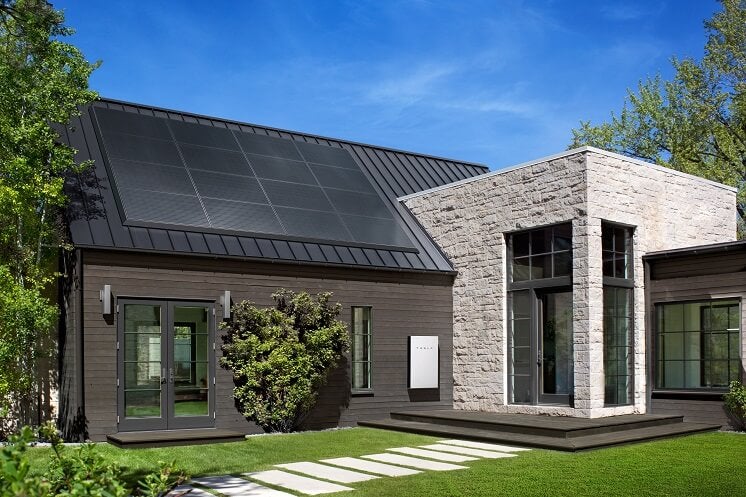 Tesla installs both solar panels and solar roof tiles. Although the company isn’t exactly transparent about this on its website, it doesn’t manufacture solar panels but, instead, supplies and installs them.

For a while, the tech giant partnered with Panasonic to create its solar cells, but this partnership came to a close in 2019. With Panasonic out of the picture, Tesla is now working with a company called Hanwha to manufacture their solar panels.

If you’re looking to buy some of these panels, expect sleek, all-black slabs, with a 25-year warranty.

Whilst the Tesla website insists that the company creates solar tiles in its factory in Buffalo, New York, there has been a lot of scepticism around this claim. In fact, in a bid to figure out how accurate this claim is, PV Magazine looked into the tiles’ origins and found that they were shipped from China. 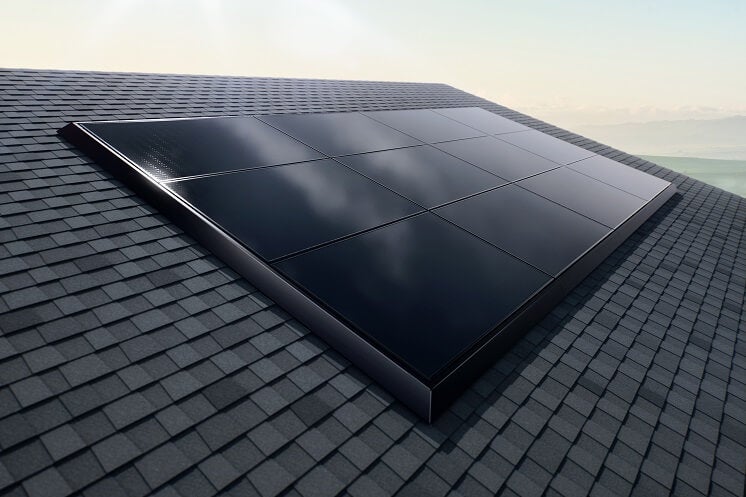 A close up of Tesla's solar panels. Photos courtesy of Tesla, Inc.

How good are Tesla solar panels?

This specific model has an ‘up to 19.5%’ efficiency rating – a pretty average figure, which doesn’t quite match some of the best solar panels on the market, which have efficiency ratings of around 22%.

However, if you’re searching for aesthetically pleasing panels, Hanwha might be the way to go. The panel’s sleek black body has no visible gridlines, and its concealed edges make it blend into the roof nicely.

An additional feature that many solar panel owners will find useful is Tesla’s smart solar inverter, which has Wi-Fi and cellular connectivity. This means it can easily integrate with Tesla Powerwall and the Tesla app, and users can manage their solar system from anywhere in the world.

Tesla’s Solar Roof and its solar panels are both popular options – although the tiles take up most of the limelight. But what are the pros and cons to them both?

One of the most attractive qualities of Tesla’s solar tiles is the fact they can blend into the existing roof much better than panels can. Homeowners can choose from four different styles – textured, smooth, Tuscan, or slate – which integrate well with non-solar tiles.

Plus, there is a 25-year warranty on the tiles themselves, the Powerwall battery, and weatherisation (if the tiles get damaged by weather over the years). That said, Solar Roof tiles are pretty durable, since they’re over three times stronger than standard roofing tiles.

Unfortunately, Tesla has not released exact data on the efficiency of the Solar Roof, which makes it difficult to compare against the company’s panels.

Tech website Electrek interviewed homeowners that had recently installed a Tesla Solar Roof, costing a grand total of $83,000 (£60,503), and found that the installation saved them over $400 (£291) during the first few months.

On the other hand, you’ve got Tesla’s solar panels. Whilst they won’t blend in completely with your roof, they still look great on a modern home.

The sleek stretch of panels can be installed on top of existing roofs, and they’re significantly cheaper than Tesla’s Solar Roof – though still expensive, compared to other solar panels on the market.

So, how much energy can these panels generate? Well, they have a 425 wattage.

The actual output will depend on how much sunshine your panels have access to, but if your roof gets five hours of direct sunlight per day, you can calculate your solar panel output this way:

Generally, solar panels are the better option out of the two, since they generate more energy. They’re also more cost-effective, and take up less roof space. 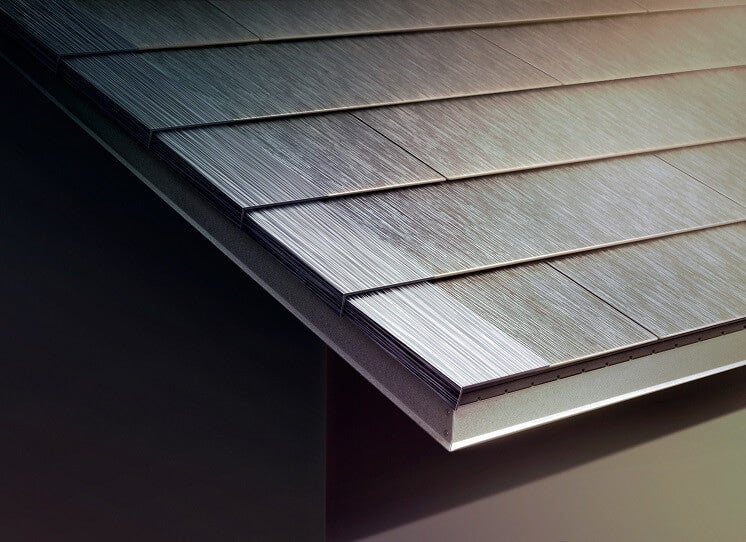 A close up of Tesla's solar tiles. Photos courtesy of Tesla, Inc.

Tesla provides warranty coverage on both the workmanship and performance of its solar panels and Solar Roof. You can expect a 10-year comprehensive cover and a 25-year panel performance warranty – though the panels might last a little longer than this, just at a less efficient rate.

How much do Tesla solar panels cost?

Unlike many other solar companies, Tesla has simplified the whole process of buying panels by creating set price packages. Rather than being able to buy one or two panels, users have to buy bundles for their roofs.

The set prices for these bundles are:

The above table includes the federal investment tax credit (only available in America) that can lower the cost of installing solar by 26%.

Compared to the price of solar panels for the average household in the UK (£4,800), these panels are pretty expensive.

As for Tesla’s solar tiles, they’ll set you back even more.

Clearly, not everyone can afford these solar tiles.

However, Elon Musk – Tesla’s CEO – states that these prices will pay off in the long run. And since the tiles are three times stronger than normal tiles, you shouldn’t have to deal with many repairs.

To help with the initial cost, users can also look into Tesla’s solar loan system, where they can make monthly loan payments. The following table outlines the estimated monthly payments for Tesla’s different solar system sizes:

Are Tesla solar panels available in the UK?

Solar Roof and Tesla Solar are currently unavailable in the UK.

Elon Musk tweeted in Spring 2019 that Tesla’s solar roofs will reach the UK in summer 2019, but it's now 2021 and nothing's happened yet.

Do you need solar panels before buying a Tesla Powerwall?

Every solar purchase with Tesla includes a Powerwall, the company’s compact battery system that stores solar energy. This is particularly useful for when the grid goes down, or if you’re simply generating too much energy to use during the day.

Tesla is keen to point out that its Powerwall has a child- and pet-friendly design, with no exposed wires or hot vents, and is water-resistant.

Tesla certainly is paving the way into sustainable tech – but the initial price is simply out of reach for many people.

We hope that, over time, Elon will consider more affordable options, and make Tesla’s solar panels and tiles more widely available outside the US.

In the meantime, if you’re after more affordable – and just as efficient (if not more efficient) – solar panel models, we’re here to help.

You can use our easy comparison tool to receive free solar panel quotes. All you have to do is fill out a few simple questions about your property, and we’ll get you in touch with our suppliers.