✔ A solar panel system for three-bedroom house costs £5,420, on average

✔ To receive quotes on solar PV panels, fill out the form above

More and more households in the UK are turning to renewable energy to power their homes. Solar and wind energy, in particular, are making quite an impression. These sustainable sources can make your home more energy efficient, and are less harmful to the planet than fossil fuels – it’s a win-win!

But which one should you choose? Both solar and wind have their fair share of pros and cons, so if you want to learn which can save you the most money and best reduce your energy consumption, read on.

If you’re already pretty sold on solar power, you can fill out this short form to receive quotes on panels. Once you complete a few simple questions, our local suppliers will be in touch. 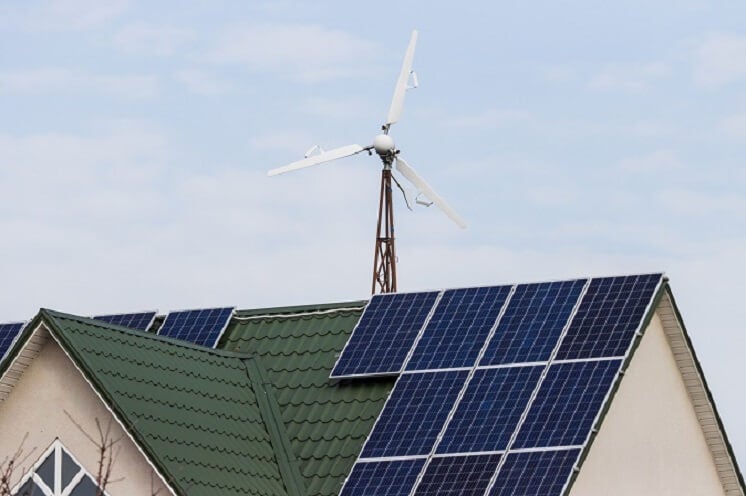 Pros and cons of solar and wind

Costs: Is solar cheaper than wind?

There’s no denying it: both of these options can strain the purse strings. However, solar is much cheaper upfront, and is typically lower maintenance. The average cost of a solar panel system for a three-bedroom house is £5,420, whereas a wind turbine can cost anywhere between £9,000 and £30,000.

Solar’s rising popularity has led to a gradual decrease in price over the past decade. In fact, according to Which?, the average price for a 4kWp solar panel system before 2015 was more than £9,000, compared to the average cost of £6,600 in 2018.

The cost of solar panels will also fluctuate depending on:

So, if you’re after the more affordable renewable energy, stick to solar power.

Solar panels are relatively low maintenance. You need to make sure you replace the solar inverter every 10 years or so, which will leave you around £1,000 out of pocket, unless you want your whole system to go kaput.

By keeping your solar panels in pristine condition, you can increase their efficiency by up to 3-5%. Luckily for you, most solar panel systems only need basic checks and cleaning one or two times a year.

Turbines, on the other hand, require a little more tender love and care (and money). Although maintenance checks need to be carried out every couple of years, each check will cost around £100 to £200, depending on turbine size. On top of this, off-the-grid batteries will also need replacing every 6 to 10 years, with prices varying depending on the design and scale.

Although a well-maintained turbine should last more than 20 years, you may need to replace the inverter during this time, which can set you back between £1,000 and £2,000.

Looks like solar secures the victory on this one.

Are home wind turbines worth it?

In a nutshell, wind turbines are only worth installing if you live in an isolated area. If you’re considering getting a wind turbine, check the points below to see whether your home is an ideal location.

How many solar panels does it take to equal the power of a wind turbine?

According to Direct Energy, if your local wind speed is 10 mph, a new wind turbine will produce an average of 2.8 kWh per day – which is about the equivalent of 8 solar panels.

Considering a 4kWp (13-16 panels) solar panel system will only set you back around £5,420, it’s safe to say that solar is the much more economical option here.

Can a small wind turbine power a house?

Surprisingly, yes! But this will come at a price.

Being able to fuel your home with wind power will depend entirely on which turbine you go for. If you opt for a building-mounted turbine, chances are you’ll only be able to power a few appliances around the home.

If you’d like your wind turbine to cover the bills, you’ll have to go for the pricier option of a pole-mounted turbine.

But using renewable energy at home doesn’t need to be this expensive. If you’re trying to go renewable on a budget, solar panels are much cheaper than wind turbines, and can generate just as much power.

Can solar and wind power the world?

Renewables should be able to power the Earth one day. In fact, researchers have predicted that the planet could be 100% renewable by 2050 – with solar and wind contributing to half of this energy. By that time, coal and gas will have been forced out by cheaper renewables.

Over the past few years, renewable energy has steadily risen in prominence – offering a promising glimpse at a fossil fuel-free future. Currently, 40% of the UK’s energy is sourced from renewables – 20% from wind, 12% from biomass, and 6% from solar. 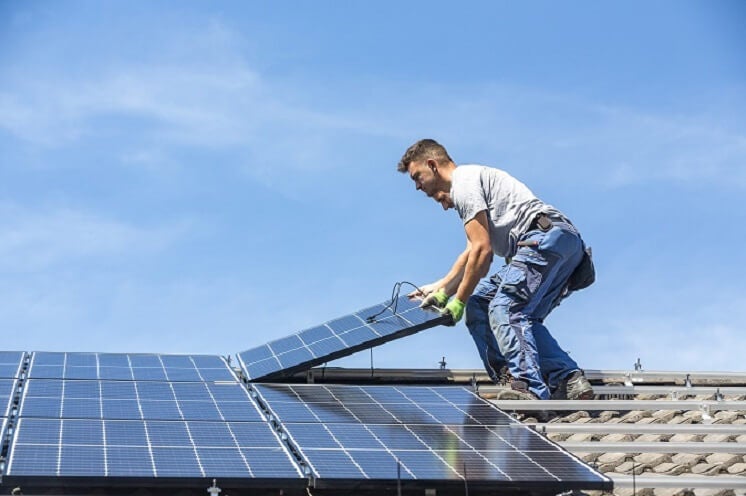 Which is better: Solar panels or wind turbines?

Wind and solar are both excellent ways to power your home without adding to your carbon footprint  – but solar is the clear winner for us.

We don’t know about you, but wind power hasn’t exactly blown us away. Whilst turbines are a good option if you can afford the upfront cost, you’ll need to take into account your location, the average wind speed, and whether or not you need planning permission before investing. Plus, not many people can set aside a chunk of money to the tune of £30,000.

Solar panels, on the other hand, are perfect for residential areas, much more affordable, and can still provide a reliable source of energy on an overcast day.

Also, 65% of people are likely to buy a house with solar panels, according to our latest National Home Energy Survey.

If you can’t wait to prop some panels on your roof and reap the rewards of solar, all you have to do is answer a few simple questions on our short form. Once you’ve completed this, our local solar panel installers will be with you shortly!