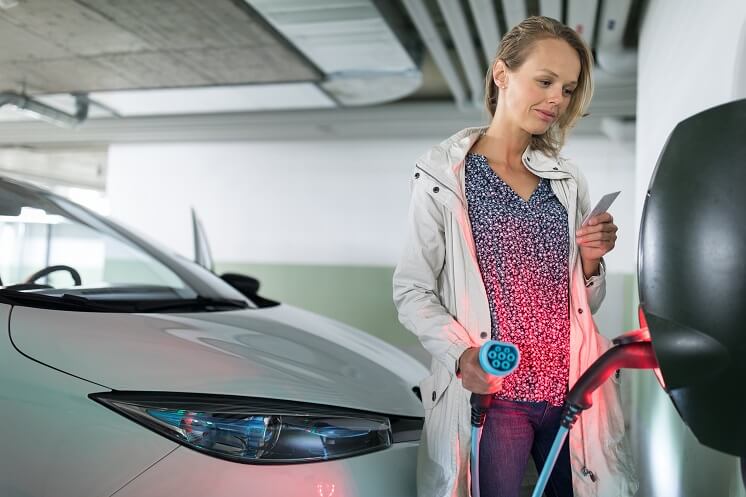 A few short years ago, seeing an electric car on the roads – or even walking past a charging point – would be enough to make you double-take. These gizmos were rare sightings in a world filled with fossil-fuel cars.

Fast forward to today, and pure-electric models account for 6.7% of total new car registrations. It may not sound like much, but this proportion is certainly climbing rapidly.

So, as our transport quickly becomes electrified, why not brush up on your electric vehicle trivia? We’ve listed 21 things to know about electric vehicles (EVs) in this article.

1. EVs have grown a lot in popularity…

With each year that goes by, a record number of electric vehicles are sold. Electric cars, which accounted for 2.6% of global car sales and about 1% of global car stock in 2019, registered a 40% year-on-year increase from 2018.

2. …and, as a result, they’ve gotten much cheaper

As EVs become more popular, their price tag is shrinking. In fact, battery costs – the main factor driving up prices – have decreased by more than 85% since 2010, according to the IEA.

Although electric vehicles might still be out of reach for some people, prices are certainly headed in the right direction.

That’s right, electric cars have been around for a while – over a century, in fact.

The very first electric car was built in 1884 by English inventor Thomas Parker, who was also responsible for the electrification of the London Underground. By 1897, a fleet of electric taxis was also being used in London.

However, improvements in petrol and diesel technology soon took over the industry, and marked the end of electric cars for at least 100 years.

4. An EV’s green credentials depend on where it is made

Countries around the world are pushing for more renewable energy use – especially in the construction industry. And this is the stage where electric vehicles produce most of their emissions: production.

To put this into perspective, the chart below shows an estimate of lifecycle emissions for a typical European conventional car (i.e. with an internal combustion engine), alongside those for a Nissan LEAF electric vehicle. The chart features various countries, as well as the EU average.

Research has proven that despite these emissions, in 95% of the world, driving an electric car is still better for the climate than a petrol car. The only exceptions are places like Poland, where electricity generation is still mostly dependent on coal.

5. Norway is buying the most EVs

Last year, Norway hit a huge milestone by becoming the first country in the world to sell more electric vehicles than those powered by petrol, diesel, and hybrid engines. Throughout 2020, EVs accounted for 54.3% of the new car market – up from 42.4% a year earlier.

But why are electric cars so popular in Norway? Put simply, the government makes it easier for people to own an electric vehicle, exempting them from taxes that are imposed on cars which run on fossil fuels.

This is all part of Norway’s plan to become the first nation to end the sale of petrol and diesel cars by 2025.

6. There are more charging points than petrol stations in the UK

In 2019, Nissan announced that drivers now have more public places to charge electric cars than they do to fill up with petrol or diesel – and the competition isn't close, either. There are roughly 9,300 electric vehicle charging points across the UK, compared to 8,400 fuel stations.

Almost 80% of UK petrol stations have closed since 1970, while the number of electric vehicle charging locations have been steadily increasing by the hundreds since 2011.

7. You can save on parking by owning an EV

With an electric car, you could be eligible for free parking in some areas of the UK. As part of the UK government’s initiative to get more EVs on the road, local councils are encouraged to provide free parking for eco-friendly cars.

Unfortunately, there’s no one rule for EV parking – each council has its own set of rules in place. However, even if you’re not eligible for free parking, you’ll usually find that most councils charge a heavily subsidised fee instead.

8. The fuel is cheap

While the initial cost of an EV is fairly expensive, the average cost of running a 100% electric car is only 4p per mile, according to the UK government.

Compared to the average price of 11.8p per mile for petrol cars – three times more than Nissan’s Leaf – electric vehicles will be able to save you heaps of money in no time.

In fact, if you buy an average electric vehicle, you’ll spend £6,000 on charging it. In contrast, a petrol car will cost £17,700 to go the same distance over its lifetime – meaning an electric car can save you approximately £11,700 thanks to its cheap fuel.

…in fact, the manufacturing process behind EVs is more harmful than that of petrol and diesel cars, with the CO2 emissions generated from electric car production being 59% higher than for internal combustion engine vehicles. The key reason behind this is largely down to the battery manufacturing process. The level of emissions from electric vehicles also comes down to where the electric car is being made.

The good news is that since electric cars have no tailpipe, EV owners don’t release any CO2 emissions whilst driving – meaning the more electric vehicles we have on the road, the better quality our air will be.

10. New EVs actually have to be noisy

A few years ago, one of the selling points for an electric car was that they massively reduce noise pollution. Now, however, their stealthy silence has become quite a concern for pedestrians.

In 2019, it was reported that all new types of four-wheel electric vehicles must be fitted with a device that sounds like a traditional engine. Thankfully, this sound is only triggered when an EV reverses or travels below 12mph, to help pedestrians in residential areas.

New regulations will require all new electric vehicles to feature a warning noise to alert pedestrians and cyclists.

11. Tesla has a new feature to keep pets cool…

Meet ‘Dog Mode’ – the feature that can keep your pet cool in the car whilst you go about your day. Drivers simply have to use the Overheat Cabin Protection function to keep the car at a comfortable temperature for their furry friend.

What’s more, the car also displays a large message on the centre touchscreen panel which informs passers-by that the pet is being kept at a comfortable temperature. Because let’s face it, coming back from the shops to a broken window on your sparkly new Tesla is enough to bring a tear to your eyes. 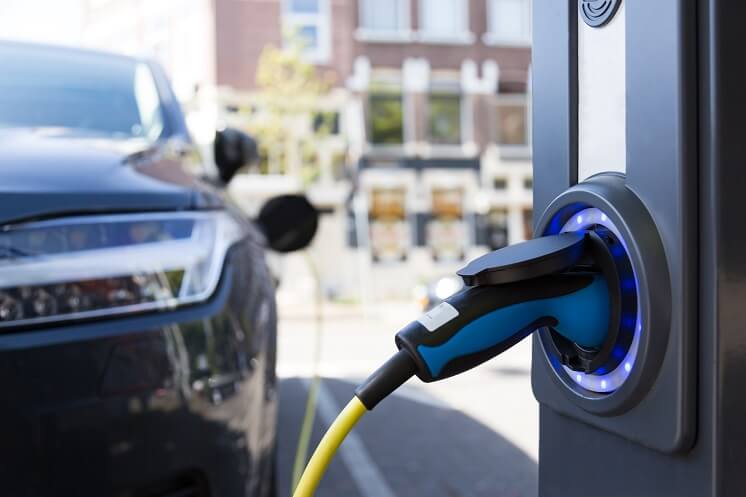 12. …along with a handful of other wacky features

Tesla doesn’t shy away from innovation, no matter how wacky or weird. We’ve listed a few of the company’s cool (and a little crazy) features below:

When your car can do zero-to-sixty faster than you can make your next move, we call that a checkmate.

13. Braking will add miles to your range

According to EDF Energy, all electric cars have ‘regenerative braking’, which means that every time you brake, some electricity goes back into the battery.

So, in some mind-boggling way, braking helps you to get more miles from the car – enabling you to drive even further. Electric car drivers who are driving down a hill or a mountain will usually find they’ve actually added miles when they reach the bottom.

14. You can now get green licence plates in the UK

To promote low-emission vehicles, the UK Government has introduced special number plates for new electric cars. These are already being used in other countries, such as Norway, Canada, and China, and will make it easier for cars to be identified as zero-emission vehicles.

The goal? To help local authorities incentivise people to own and drive electric vehicles. For example, drivers could benefit from local initiatives, such as cheaper parking and cost-free entry into zero-emission zones.

15. You can power your house from an electric car

With the right equipment, it’s possible to use your car's battery to supply your own home or balance the electricity grid at certain times of the day.

Nissan also demonstrated back in 2013 that it’s perfectly feasible to use a car battery to power an outdoor event – or even a Christmas tree – using their LEAF-to-home system. Even a modest 22kWh battery contains enough electricity to power a home for a couple of days.
So next Christmas, forget about your light display increasing the electricity bill – your car’s got you covered!

16. A new electric car is registered every 4.8 minutes

We told you they were popular. In the first nine months of 2020, worldwide registrations for pure EVs were up by a massive 127% compared to 2019 – with more than 66,600 pure EVs being sold during this period.

Plug-in vehicles registered an even higher figure, rising to a total of almost 108,900 units – or in other words, a new car every 4.8 minutes.

17. Tesla Model 3 is the most popular electric car on the market

The battle between Tesla and Nissan continues, with Tesla now taking the lead. Elon Musk’s company has sold an estimated 645,000 Tesla Model 3s in total, with long-time leader the Nissan LEAF trailing behind with 490,000 vehicles on the road.

While the LEAF has been on the market for nearly 10 years, the Tesla Model 3 – the new kid on the block – has only been around for over three years.

But the main difference between the two is the price tag. To get your hands on a Tesla Model 3, you’ll need to fork out at least £42,5000, whilst with a Nissan LEAF, you can expect to pay roughly £26,790.

18. You can now charge electric cars in under an hour

Not so long ago, your only option was to wait 12 hours for your electric car to charge. Today, however, you can fill up your car whilst you get ready for work, thanks to rapid charging technology.

The three main types of EV chargers are:

Of course, the type, model, and size of your car can also impact how long it takes to recharge its battery.

19. EVs can improve your personal health

Living in an area with more electric vehicles than combustion ones can benefit your health massively, mainly by reducing the amount of CO2 being released in the atmosphere. This way, EVs can reduce the amount of polluted air you inhale, which can have awful effects on your lungs.

And it’s not just air quality that’s improved – electric cars can also reduce noise pollution, an often overlooked side effect of traditional cars. This type of pollution can cause Noise-Induced Hearing Loss (NIHL), high blood pressure, heart disease, sleep disturbances, and stress. It’s even been found that many children who live near noisy areas have been found to suffer from stress, as well as impairments in memory, attention level, and reading skill.

20. You can hook up your EV to solar panels

If your house is already decked out with solar panels, you may be able to power your car from them as well as your home.

To efficiently charge an electric vehicle using solar panels, you’ll need to install a home charging unit and a PV inverter unit, which converts solar energy into electricity. If you plan to charge your car at night, you’ll also need a domestic solar battery storage system to store the energy harnessed throughout the day.

Although the combined cost of all these gadgets can mount up, the free fuel courtesy of the sun will pay you back in no time. According to Statista, the average British household spends £22 on petrol each week – that’s £1,144 a year you can avoid by using the sun to power your car!

21. The future is looking bright for electrical vehicles

So far, auto manufacturers have pledged to dedicate roughly $225 billion towards new EVs – but what are the largest names doing to transform their fleet?