People all around the globe are increasingly switching to cleaner modes of transport. In 2018 alone, the global stock of electric cars increased by 63% compared to the previous year.

And according to The Eco Experts National Home Energy Survey, 69% of UK residents said they would buy an electric vehicle if money was no object. Another 17% said they plan to buy an EV within the next 12 months.

But when it comes to actually investing in an eco-friendly car, what are your options? Many people tend to overlook hydrogen fuel cell cars, opting instead for the more popular option of a battery-powered electric vehicle.

In this article, we’ll guide you through which best suits your needs: batteries or fuel cells. We’ll discuss the difference between battery and fuel cell cars, pointing out the pros and cons of both, differences in price and levels of efficiency. You’ll be on the road to a smaller carbon footprint in no time. 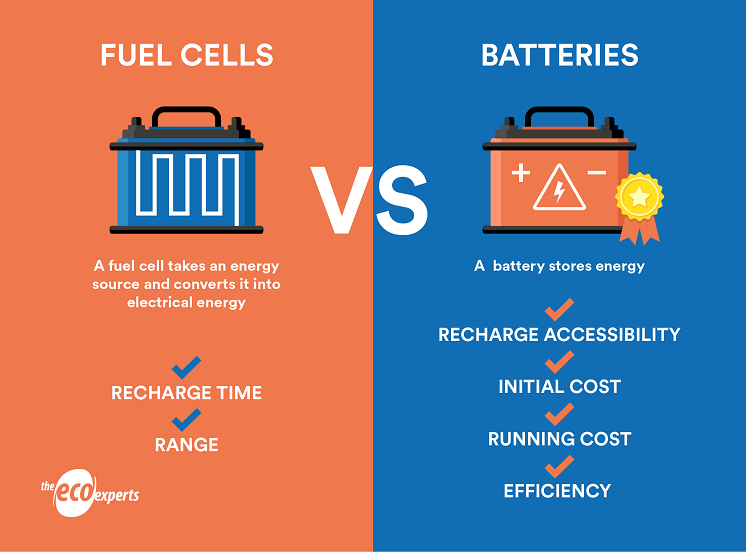 What’s the difference between fuel cells and batteries?

Let’s go over the basics.

While both of these technologies power vehicles, they do it in completely different ways. The biggest difference between the two is that a battery stores energy, while a fuel cell takes an energy source – such as hydrogen, propane, diesel, or natural gas – and converts it into electrical energy. A fuel cell can also have a battery as a system component to store the electricity it’s generating.

Although fuel cells are predominantly used with hydrogen, they can also use fossil fuels. Rather than ‘combusting’ the fuel’s chemical energy, it ‘converts’ it. The result is a fuel cell that can create clean electricity, efficiently and effectively.

A lot of investment has been pumped into both battery-powered and fuel cell vehicles over the past decade – and as a result, prices for both products have decreased massively.

The price of fuel cell vehicles – especially buses – has been reduced by 65% over the past 10 years, whilst batteries have seen a decrease in costs by more than 85% in the same timeframe.

Despite this drop in prices, fuel cell cars are likely to remain pricey for quite some time, whereas battery-powered cars are predicted to continue falling in price. This is mainly down to the fact that a lot of governments are pushing for the electrification of transport. In fact, the UK government is aiming for 50% of all new vehicles sold in the UK to be electric by 2030.

We’ve outlined how much you can expect to pay as a starting price for each type of vehicle below.

Why are fuel cell cars more expensive than electric vehicles?

Fuel cell cars are heavily reliant on platinum – a precious metal, which acts as a catalyst during power generation. This is the main factor leading to a larger price tag for hydrogen fuel cell cars. That being said, the amount of platinum needed for fuel cells has already reduced greatly, so perhaps this will be less of an issue in the future.

As well as platinum, hydrogen itself is an expensive fuel, and is extremely difficult to manage.

“Hydrogen and synthetic fuels will remain more expensive than an electric drive, as more energy is required for their production.” – Dr. Frank Welsch, Member of the Board of Management of the Volkswagen Passenger Cars brand with responsibility for Technical Development

Modern fuel cell cars still, unfortunately, have cells that take up a lot of space – meaning the vehicles themselves need to be a little on the large side, too. This is a major reason why some people are unable to justify investing in a fuel cell car. An electric battery, on the other hand, is able to fit in very small cars, making it a much cheaper option.

How much do they cost to run?

On average, the cost of running a hydrogen car is almost twice as high as that of battery-powered vehicles that are charged at home.

According to Voltswagen, drivers currently pay around €9-12 per 100 kilometres for a hydrogen car, while battery cars cost between €2-7 per 100 kilometres, depending on electricity prices in individual countries.

How long do fuel cells last?

There’s a lot of disagreement over how long batteries and fuel cells last. In terms of range, you can expect to get much more out of a hydrogen car, averaging at 200-250 miles. Realistically, however, this will all depend on a few factors, including the type and size of battery/cell you get, how frequently you drive, and even how often you refill/recharge.

On average, fuel cells are designed to last about 150,000–200,000 miles, whereas the likes of Nissan and Tesla only offer a guarantee of 100,000 miles for their electric batteries. 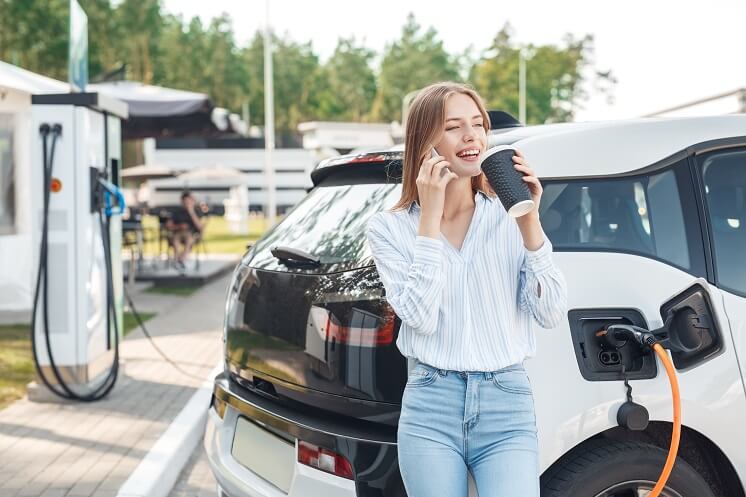 Pros and cons of fuel cells and batteries

Below, we’ve gone into a bit more detail on some of the pros and cons that will help you make the important decision between choosing a battery-powered or fuel cell car.

Generally, it's much faster to refill a hydrogen tank than to recharge a battery, so you might be able to save yourself some time with a hydrogen car.

As a general rule of thumb, you can expect an electric vehicle to take anywhere between 30 minutes and 12 hours to charge, whereas a hydrogen fuel cell will only take a few minutes. This will, of course, depend on the type and size of cell you go for.

Although, if you opt for a hydrogen fuel cell over a battery powered EV, you might struggle to find somewhere to actually fill up your car. Hydrogen stations are far less common around the globe than electric vehicle charging stations. It is predicted that this poor infrastructure will improve over time, but it’s not likely it will match the scale of electric vehicle charging any time soon.

When it comes to efficiency – or, in other words, the amount of effort it takes to convert energy – batteries are far more efficient than fuel cells. In fact, Volkswagen stated that electric cars have an efficiency level of between 70-80%, depending on the model. That means about three quarters of the electricity generated is actually applied to running the car.

On top of this, a hydrogen-fuel cell requires 2-3 times more energy to drive the same distance as an electric car.

Fuel cells can, however, operate at higher efficiencies than combustion engines – resulting in lower emissions than your typical fossil-fuel car.

Although fuel cells are widely used for hydrogen, they can also convert energy from other fuels, including propane, natural gas, and diesel. Although these are ‘dirty’ fuels, there are far fewer emissions generated if they go through a fuel cell, rather than a standard generator.

Currently, most electricity used to produce and run electric vehicles comes from fossil fuels. The CO2 emissions generated from electric car production are 59% higher than the level in the production of traditional internal combustion engine vehicles. The key reason behind this is largely down to the battery manufacturing process.

The level of both cars’ emissions also comes down to where the electric car is being made.

An EEA report found that in China, 35-50% of total EV manufacturing emissions arise from electricity consumption for battery production – up to three times higher than in the United States. If electricity was generated by wind power alone, however, China would see a 50% drop in emissions from the production phase.

Check out the chart below to see how emissions can fluctuate depending on location:

Thankfully, both batteries and fuel cells are now able to be recycled once they reach the end of their life cycle. This means that fewer emissions will be created in the manufacturing of future products, as there will be less need to resource more materials.

So what’s right for me?

If affordability, efficiency, and eco-friendliness are at the heart of your concerns, electric vehicles may be for you. Current electric vehicle models are already reaching similar prices to some combustion-engine models. In contrast, the hydrogen car will always remain more expensive than the battery car – this is due to the complex technology and high fuel costs involved.

However, if you’re a regular long-distance driver, a hydrogen fuel-cell car might work better. A fuel-cell system isn't range-constrained like a battery-electric system – indeed, they are able to carry enough fuel for 250-350 miles. Plus, their tanks can be refilled much faster after a long journey.

Admittedly, range is becoming less of an advantage in recent years, since the new generation of electric vehicles’ ranges will increase to 400-600 kilometres, while charging will become increasingly fast.

Whichever option you choose to go with, you can rest assured that your decision will be much kinder to the planet than your current combustion engine.