Buying an electric car is one of the quickest ways to reduce your carbon footprint and fight climate change – but as with any new technology, you want to know that it’ll be worth it.

We’ve got you covered with all the latest statistics.

Like the graphics on this page? Feel free to use them – they can be found on this Google Drive. We just ask that you credit us with a link back to this page. Thanks! 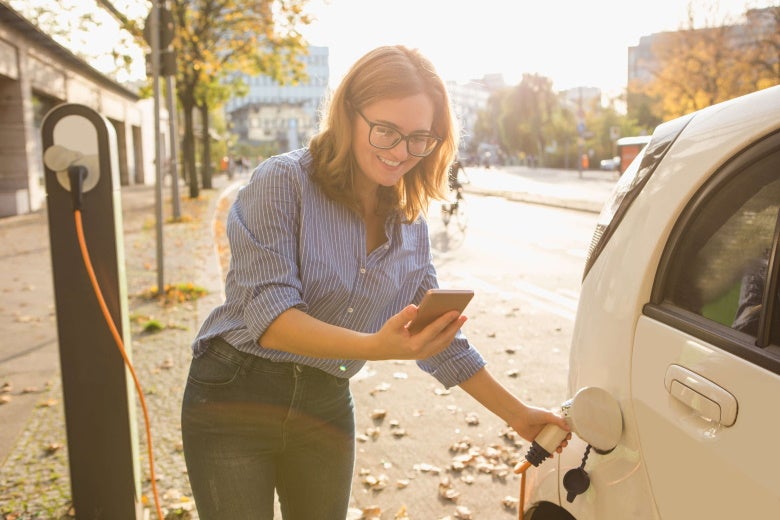 How many electric vehicles are there in Britain?

There are 1.8 million electric vehicles (EVs) in Britain, according to government data from June 2022 – and that number is rising.

As you can see below, new registrations of electric cars have spiked in recent times, as petrol and diesel cars experience a seemingly irrevocable decline.

The majority of electric vehicles in Britain are hybrid models, but purely electric cars are catching up.

In fact, looking at the results of The Eco Experts' National Home Energy Survey, it's clear that EVs are only going to increase in popularity.

The survey showed that 17% of UK residents plan to buy and EV within the next 12 months, and a further 69% say they'd purchase an EV if money were no object.

As the cost of EVs goes down, their representation on UK roads will certainly go up.

What percentage of vehicles in Britain are electric?

4.5% of road vehicles in Britain are electric, according to government data.

This figure is rising all the time, and will likely explode upwards in the coming years, as electric cars continue to be registered at a quicker rate than diesel and petrol vehicles.

What’s the most popular electric vehicle?

The most popular electric vehicle is currently the Tesla Model 3.

From April 2020 to March 2021, UK drivers registered twice as many of these Elon Musk creations as any other electric vehicle, according to the government’s vehicle licensing statistics.

The Tesla Model 3 also pulled off this trick between April 2019 and March 2020, showing its staying power.

Yes. Britain has seen a massive rise in electric vehicle ownership over the past two decades.

And the good news doesn’t stop there. Every year since 2010, the annual increases in electric models have gone up.

In 2019, there were another 166,000 electric vehicles on these shores. For now, this is a rollercoaster that only goes up.

In 2019, electric drivers in the UK stopped the climate from being exposed to 2.8 million tonnes of CO2e*.

That’s how much CO2e would have been released if the country’s 758,200 electric vehicles were powered by fossil fuels instead.

But as long as electric drivers signed up to one of the many 100% renewable energy plans currently available, their vehicles wouldn’t contribute to carbon emissions, giving them an emissions total of zero.

That means that unlike drivers who use fossil fuels, each electric driver will save 54.15 tonnes of CO2e over their vehicle’s typical 150,000-mile lifetime.

If every vehicle currently registered in our country – all 31,888,400 of them – was electric, we could save 1.73 billion tonnes of CO2e over the course of those vehicles’ lifetimes.

The average person in the UK drives 6,800 miles per year, emitting 2.45 tonnes – which comes to 41% of their total carbon footprint.

If you get an electric car and use a 100% green tariff, you can completely eliminate this from your footprint.

How much CO2e would be saved if everyone drove electric vehicles?

Road traffic in the UK released 89.6 million tonnes of CO2e over the past year, which could be eradicated entirely.

All it would take is everyone driving an electric vehicle that’s charged with green energy – and that’s completely feasible.

You can now sign up to 100% renewable plans with everyone from Octopus to Big Six energy suppliers like Npower and E.ON.

How far can you drive an electric vehicle without charging?

The average electric vehicle can travel for 198 miles on a full charge – but the UK's five most popular models keep going for 280 miles, on average.

If you were driving north from the centre of London, you could make it to Birmingham, Leeds, or Manchester with some juice left in the tank.

And if you wanted to go south, you could get to Exeter and even Plymouth without needing to recharge – and if you’re looking westwards, Swansea is well within range.

An electric vehicle's range can be negatively impacted by many factors, including:

Cost of owning an electric vehicle vs a petrol car

The average cost of running an 100% electric car is 4p per mile, according to the UK government.

And the latest vehicles can beat this figure, with the Nissan Leaf e+ costing just 3.7p per mile, according to our calculations.

This figure stacks up nicely against petrol cars, which cost 11.8p per mile – three times more than Nissan’s model.

How much will you save over an electric vehicle’s lifetime?

A car will generally clock up around 150,000 miles across its lifetime, which means that even though electric models can be more expensive initially, they can save you several bucket loads over the years.

If you buy an average electric vehicle, you’ll spend £6,000 on charging it.

And of course, you’ll spend even less if you buy a home charger. Fill in this form to see how much one would cost you.

How many public charging points are there in the UK?

There are 28,375 public charging points for electric vehicles in the UK, as of January 2022, according to the Department of Transport.

5,156 of these are rapid chargers, which will do the same job at anywhere from two to 14 times the speed of other charging points.

Has the number of public chargers grown over time?

The current figure of 28,375 is more than three times the number of petrol stations, of which there are now just 8,380, according to the UK Petroleum Industry Association’s 2021 report.

The last quarter of 2021 saw another 2,448 public chargers installed – a 9% increase that's symptomatic of the EV industry speeding up as COVID-19 becomes less of a factor.

How many electric vehicles are there per public charger?

This number has fallen precipitously over the past few years, from 75 vehicles per public charger in 2015, to just 44 per charger in 2021.

Ideally, you want there to always be a free public charger when you pull up to a refuelling station. These numbers mean you’ll have to share with fewer drivers, despite the huge rise in electric vehicle ownership.

How about the other way round?

That means the likelihood that there’ll be a charger when you need one has skyrocketed by 77% in just six years – and there’s every reason to think that trend will continue.

It's not just electric cars that are growing in popularity.

Everything from e-scooters to e-bikes is attracting a loyal following, and the UK moves away from fossil fuel-powered ways of getting around.

Currently, you're only legally permitted to ride rental e-scooters in public places – and only in areas which have signed up to a government trial.

You can't use privately owned e-scooters anywhere except on your own property.

However, this is all set to change soon.

After all, the global market for e-scooters is already worth £14.3 billion, according to Grand View Research.

And customers in the UK are enthusiastic about these easy-to-ride two-wheelers.

28% said in 2021 that they would consider ditching their car for an e-scooter to “benefit the environment.”

They're not just for fun, either: the public sees them as a legitimate form of transport.

66% of people who told a 2021 government survey that they were likely to buy or rent an e-scooter said they'd do it to reach a destination.

E-bike purchases have been rising rapidly worldwide for decades, and they're set to take off in the UK.

55% of people told a 2021 survey they were considering buying an e-bike, and that figure rose to 66% in a situation where the government subsidised purchases.

85% of all e-bikes are sold in China, but that won't be true for much longer, as the device's popularity spreads.

One reason that people are coming round to e-bikes is the lack of demands they put on people's physical abilities.

20% of people who don't ride a bicycle told a Transport for London survey they were too old or unfit to do so – a problem e-bikes can solve.

The electric vehicle industry is well-placed to keep gaining on its fossil fuel-powered counterpart at a rapid pace.

With models getting better and better, charging points becoming a more common sight with every passing year, and electricity already significantly cheaper than petrol, it’s clear that electric vehicles are the future.

If you want to embrace progress and get involved, just fill in this form to find out how much an electric vehicle charging point will cost you.