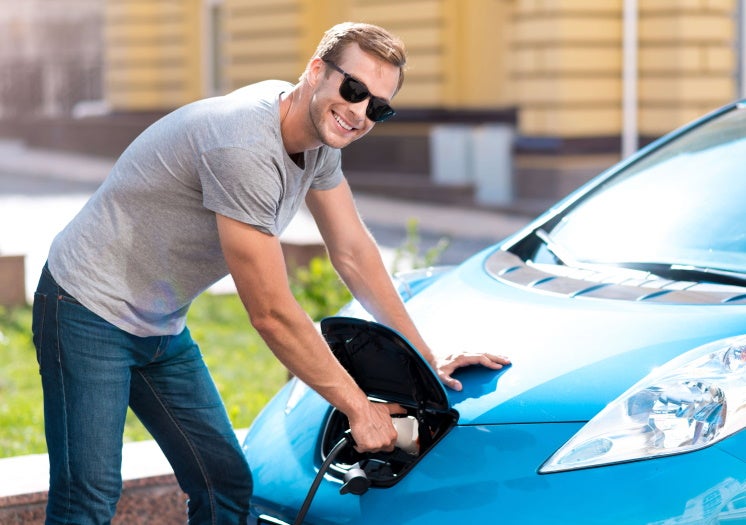 ✔ There are 3,600 more electric charging locations than petrol stations

✔ Many modern electric cars have 200+ miles of range

You want to help fight climate change, and electric cars represent a tangible way of making a difference.

They’re also sleek, futuristic, and three times less expensive to charge and run than their petrol counterparts – but before you jump in, you want to know how to keep them charged.

That’s fair enough. In this guide, we’ll run you through the different options for recharging your car, and let you know how to use them.

You’ve chosen an excellent time to learn, as you can currently use the government’s Electric Vehicle Homecharge Scheme to get £350 off the cost of a home charging point. Fill in this form to see how much one would cost you.

How does EV charging work?

An electric car needs refuelling, same as any vehicle. For this advanced mode of transport, all you’ll need to do is plug it in to an electricity source, and leave it for a while. That’s it.

It’s just like charging your phone, in that each type of model will require a different kind of cable to make the connection.

There will be a port on your car and another on your chosen charging station, and your cable will need to plug in to both of them.

We’ve laid out below which connector matches with each charging station, and once you’ve got that straight, the only difference is the speed and the price you pay for it.

There are four types of connector: slow, fast, rapid, and ultra-rapid.

Would it be less confusing if they were called slow, medium, fast, and fastest? Yes. But we don’t live in a perfect world.

These connectors determine how quickly you can charge your electric vehicle.

Home chargers are typically slow or fast, while most public chargepoints are fast – though some are rapid or ultra-rapid.

Bear in mind that even though charging your car quickly sounds great, a slow charging station could be your best, most cost-effective option.

Slow charging stations are generally between 3kW and 7kW, and can be found at homes or workplaces.

Just like fast units, they use Type 1 or Type 2 connectors to deliver alternating current (AC) from the grid to your car, which will use its converter to change it into direct current (DC).

It’s possible to plug your electric vehicle into an ordinary three-pin socket – the same kind you use to charge your phone – but it’ll be slow going, at just 2.3kW.

You’re better off getting a dedicated home station that can reliably – and cheaply – recharge your car overnight, and which is designed to transmit that level of electricity for hours at a time. 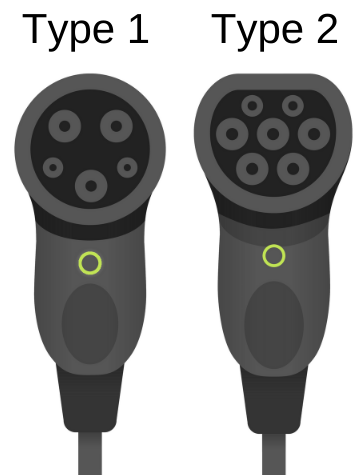 Slow and fast chargers use Type 1 or Type 2 connectors

These come in models from 7kW to 22kW, and are found everywhere.

They’re the Goldilocks’ porridge of chargers – slow enough for homes and businesses, but fast enough for public stations.

Most are 7kW, which is more than fast enough for overnight charging.

A small number are 22kW, but these are usually reserved for large businesses and their employees.

Welcome to the fast lane. This is where you can find your high-speed DC chargers, at 50kW to 100kW.

You’ll usually only find rapid and ultra-rapid units in public places, where they cost a lot more than you’ll pay for domestic electricity.

If your vehicle is built for rapid or ultra-rapid charging, it’ll have either a CCS or CHAdeMO connector – unless you use a Tesla Supercharger, which requires a Type 2 connector.

And don’t worry about buying a cable to connect to the charger – all DC charging stations come with tethered cables which can fit snugly into your car’s connector. 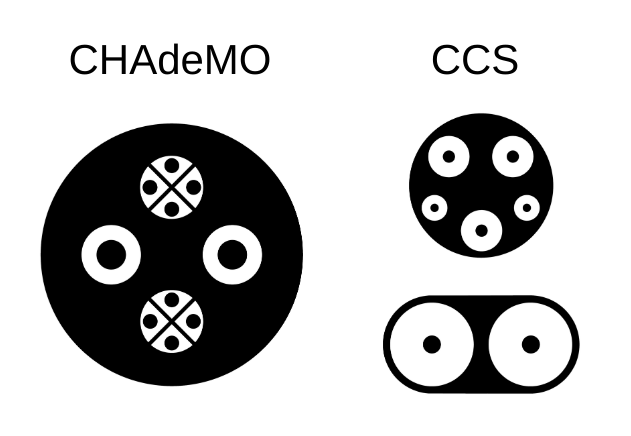 Rapid and ultra-rapid chargers use CHAdeMO and CCS connectors

Ultra-rapid charging stations are faster than a speeding bullet, at 100kW or more.

That means that in mere minutes, you’ll be good to go.

The Peugeot e-208, for instance, will take just 20 minutes to charge up from 20% to 80%, according to charging company Pod Point.

The downside of these chargers is their price, which like their rapid counterparts can often be horribly excessive when compared to home charging stations.

How to charge an electric vehicle at home

You’ll need a home charging station, which you can get at a lower price by using the government’s Electric Vehicle Homecharge Scheme.

This initiative could save you 75% of the cost of buying and installing a home charger, up to £350.

Once it’s been set up, all you’ll need to do is plug one end of your cable into the unit, and the other end into your car.

And then it’s just a matter of plugging it in when you need a charge.

Maybe you want to leave it charging every night, or maybe once per week is enough for you. It all depends how often you drive, and which vehicle you own.

If you want to see which models are the best around right now, check out our article on the top nine electric vehicle home chargers.

There are 12,098 locations in the public charging network, according to the latest data from Zap-Map.

A small, shrinking number of these electric charging stations are free, but most require you to pay considerably more than you would at home, often after you’ve already paid a subscription fee.

But if you need to use one, all you’ll need to do is check your car’s connector type, and then find a charging station nearby.

You can do this by checking Zap-Map, which has a database of UK charging stations.

Just pop in your connector type and choose the speed of charge you’d like, and you can see all your local charging spots.

Make sure to have a look at whether there are any free stations, as it might be worth driving a little further to save some money. 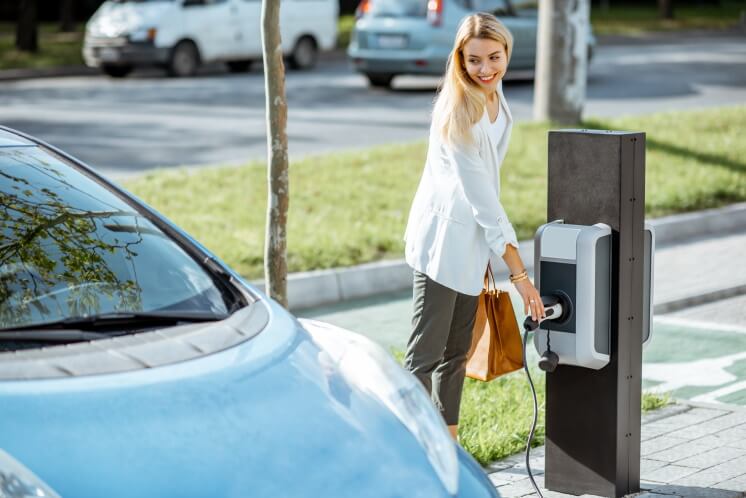 Hopefully your company is forward-thinking enough to provide its staff with electric vehicle charging stations.

If so, all you have to do is park next to one of the units, plug your cable into the right outlet, and go through your workday safe in the knowledge that you’re recharging your car for free.

And if your employer hasn’t installed any units yet, you might want to tell them about the Workplace Charging Scheme.

As long as their business is eligible, this scheme will cover 75% of their charging point costs, up to £350, for as many as 40 units across multiple sites.

That’s a potential saving of £14,000, which shouldn’t be sneezed at – and you’d get to charge your car for free.

Cost of charging a vehicle at home vs in public

Charging at home is the cheaper, more cost-effective choice.

It costs just 4p per mile to charge the average electric vehicle, according to government data.

You should pay roughly that figure, as long as you have a decent deal with your energy supplier.

The average domestic rate is 14.4p per kWH (kilowatt-hour), according to UKPower. If you’re paying more, take advantage of the Energy Switch Guarantee and cut your energy bills.

If your electric vehicle’s maximum charging capacity is 200 miles, at 4p per mile, you’ll pay £8 per full charge.

Charging in public will almost always be more expensive than that, but it’s usually quicker.

To access chargers supplied by Polar – the most popular public charging company in the UK, according to Zap-Map – you’ll need to pay £7.85 per month, and then anywhere from 12p to an eye-watering 40p per kWh.

Of course, prices are coming down all the time, so if you can find charging stations that cost less than domestic electricity, take advantage of them.

But generally, public charging should be reserved for emergencies. It’s a drain on your wallet and your time, and means you’ll be constantly checking your battery level.

Either way though, you’re winning with an electric vehicle. The 4p per mile figure quoted earlier is three times cheaper than the average petrol car.

And our calculations indicate that the latest vehicles  – like the Nissan Leaf e+ – run at an even cheaper rate, costing just 3.7p per mile.

2. Don’t use a three-pin socket, though – they’re especially slow, and aren’t built to sustain a charge for that long

4. Check your connector to make sure what kind you have, so you’ll always know which charging station you need

6. Apply for the Electric Vehicle Homecharge Scheme to save £350 on your charging unit

7. Tell your employer about the Workplace Charging Scheme to boost their eco-friendly credentials and net yourself a way of charging for free

Well done! If you’ve made it this far, give yourself a round of applause. You’ve graduated from electric car charging school, and are ready to get your own vehicle.

You know about all the different speeds and outlets you need to be aware of, and you know that home charging is cheaper and more reliable than public charging.

So what are you waiting for? Go get the car that’s three times cheaper to run than the average petrol car, and that can be recharged with your own personal discounted refueling station.

If you’d like to see how much a home or business charging point would cost, fill in this form.