The UK is at a crossroads: we can either become a carbon-neutral country or suffer the consequences. Thankfully, the Government has set out new targets for the country to meet by 2050 – but will we be able to come together in time to meet this deadline?

According to YouGov, only 46% of businesses in the UK have made plans to go carbon neutral by 2050, and a further 31% say they have no plans at all to be net carbon neutral.

But since 60% of people want to go greener, in light of the rising energy bills, it's in companies' best interest to go carbon neutral.

As for the small percentage of businesses that are already busting carbon emissions – how exactly are they doing it? Is it as difficult as companies think? Can other companies follow in their footsteps? We’ll cover all your questions in this article. 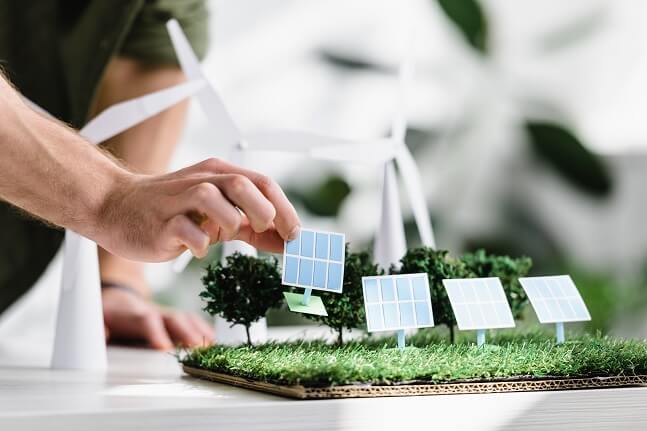 With over 23 million subscribers and more than 30,000 employees, Sky’s carbon neutral strategy is a commendable achievement. The company went carbon neutral in 2006, and has since reduced its carbon consumption by 55%.

Sky has hit these targets by heavily reducing energy consumption, travel, waste, and water use, as well as improving fuel efficiency across its vehicle fleet. Plus, the company achieved 100% renewable electricity in 2016 through on-site wind power.

To offset the emissions that it does generate, Sky has also financed more than 30 environmental projects around the world, including renewable energy projects in India and rainforest conservation efforts in Brazil.

To take this one step further, Sky has also produced the world’s first automatic standby mode for its set-top boxes – encouraging customers to reduce their emissions. When it comes to being green, Sky has no limits!

Microsoft’s main priority when creating the Xbox One X was to dramatically reduce energy consumption. The result? An updated Xbox with power consumption 90% lower than the Xbox 360.

What’s more, Microsoft has made the production process for its products much more eco-friendly – with all of its manufacturing sites using 100% renewable energy.

Microsoft’s carbon neutrality mostly comes from its contribution to environmental projects. The company’s biggest scheme is the Sichuan China Biodigesters project, which distributes small-scale biogas plants to low-income rural households in China. The biogas can be used for cooking, heating, and lighting, saving residents from having to burn coal and firewood in open fireplaces.

So far, the project has reduced carbon dioxide emissions across 400,000 farmer households. Microsoft is certainly determined to leave its mark on the environment – for the better!

This computer software manufacturer started its carbon-neutral journey back in 2018, when it invested in renewable electricity for its factories and offset any remaining factory emissions.

By the end of 2019, Logitech had gone one step further, making all of its gaming products carbon neutral (making it the first company in the industry to do so). This process was as simple as reducing the product weight, reducing the amount (and type) of plastic, and optimising energy efficiency.

Logitech has also contributed to carbon emission projects around the world. In partnership with Natural Capital Partners, the company has supported renewable energy and solar cooker projects in China, as well as conservation projects in Brazil, Canada, and Indonesia.

What’s more, Logitech has recently announced that it will be powered by 100% renewable electricity by 2030. The good news just keeps coming.

The pressure is on for UK supermarkets to become more eco-friendly. M&S, however, is well ahead of the curve, having been carbon neutral since 2007.

So how is the company making such a big impact?

M&S is the breath of fresh air that we need, and a model for UK retail stores to follow.

Though this may come as a surprise for most people, Google has been carbon neutral since 2007. The company’s keen environmental ethos is mirrored in its products and workplaces, which include over 13 million square feet of Leadership in Energy and Environmental Design (LEED) certified offices.

As Google continues to grow, it’s able to help more people become eco-friendly by saving carbon emissions. In fact, a business using Gmail can reduce the environmental impact of its email service by up to 98%, compared with running email via on-premises servers.

On top of this, for the second year in a row, Google has powered its operations with 100% renewable electricity. Plus, in its commitment to reducing waste, in 2018 it diverted 87% of its waste from global data centre operations away from landfills.

Quorn has set the ambitious goal of helping consumers reduce meat consumption by 50% by 2050. Quorn mince is responsible for roughly 90% fewer greenhouse gas emissions than beef, meaning this shift to a meat-free life will significantly reduce an individual’s carbon footprint.

In fact, by cooking with Quorn’s plant-based mince instead of beef mince once a week for a year, one person could save enough energy to boil 20,000 kettles.

In terms of the company’s own carbon footprint, over 50% of Quorn’s products have achieved certification from the Carbon Trust. Since 2012, the meat-free company has reduced emissions in its factories by 37%. You can also look out for recyclable packaging on 80% of its products.

#HeyGoogle, play my “that’s a wrap” playlist. Dancing our way out of The Google Assistant Playground—thanks for the fun, #CES2018! 📷: #teampixel

Innocent is pushing for healthy lifestyles and a healthy planet. The business’s aim is to remove all greenhouse gases from the production of its drinks, and to become completely carbon neutral by 2030. But what have they done so far?

Leon’s goal is to create fast food that is both healthy and eco-friendly. Since 2016, this ethical business has focused on three specific goals: increasing the amount of plant-based food, increasing renewable energy use, and reducing the use of plastics. But what has it done to reduce its emissions?

OLIO connects neighbours with local businesses, as well as each other, so that surplus food can be shared instead of being thrown away. Whether it’s food nearing its sell-by date, spare home-grown vegetables, bread from the bakers, or the groceries in your fridge when you go away, no food goes to waste with OLIO.

On top of preventing food waste, OLIO has partnered with a handful of sustainable brands to share exclusive eco offers with customers, so they can look forward to saving a few pennies whilst also helping the planet.

Inspiration comes from many places. Sometimes it's just around the corner.

Chilly’s is on a mission to cut out single-use plastic around the globe. Not only does this company cut back on plastic with its stainless steel bottles, but Chilly’s also works closely with multiple charities to give back to the environmental community. In 2019 for example, the company donated £200,000 to environmental group City to Sea, who are working on their Refill Project.

The Refill Project aims to make free drinking water available on every high street in Britain, which will save a billion plastic bottles by 2025, thus drastically carbon emissions from production.

Toast is re-inventing the way beer is made, to reduce the overall waste and CO2 emissions. The company’s zero-waste beer is created by using surplus bread from barley, and is bottled in recycled glass. What are its biggest achievements so far?

So far, Toast has used its profits to donate £25,000 to forward-thinking food charities, which are changing the wasteful way companies produce food.

Unpackaged’s vision is a world without unnecessary packaging – and its eco-friendly stores are doing just that. Check out their system below:

Keep your drinks cooler than the North Pole this Christmas. 🎄❄#ChillysEverywhere

All of these companies are setting a world-class example of how businesses can be successful without the planet having to suffer. The next few years are sure to see some of the biggest environmental milestones so far – let’s hope many more businesses follow in these companies’ footsteps.