Home » Solar Panels » Are Solar Batteries Worth It In The UK? 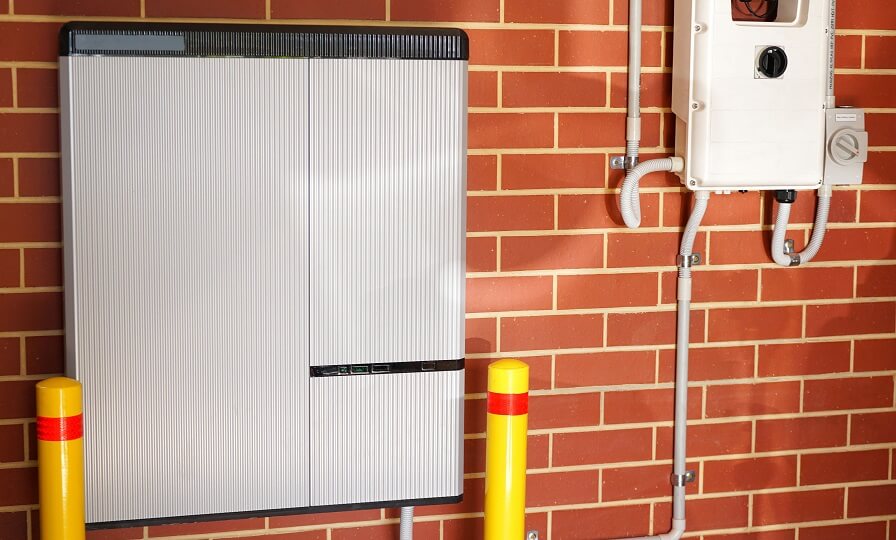 Solar panels are increasing in popularity, with around 970,000 UK households now using the technology to help reduce their reliance on the grid (and cut their carbon emissions).

On top of this, electricity costs have grown by 19% in just three years, making solar panels an attractive alternative.

If you’re one of the many turning to solar panels, you’ll want to know the benefits of solar batteries, too – they let you store the solar energy you generate, rather than have it go to waste.

But are solar batteries actually worth it in the UK? We’ll answer that below.

If you’re already set on getting a solar PV system with a solar battery, why not fill in our webform to receive free quotes from trusted installers?

Is a solar battery worth it in the UK?

Financially, solar batteries are not currently worth getting if you want to either break even quickly or make a profit.

They tend to cost around £4,500, which on top of the costs already involved in solar panels, can be a barrier for many.

However, solar batteries are worth it if you want to reduce your reliance on grid electricity, because they allow you to store the electricity generated by your solar panels.

As for longevity, a solar battery will typically last you 10–15 years. This means that over the 25-year lifespan of most solar systems, you will need to purchase two batteries, effectively doubling the total cost.

With a solar battery, you can expect to save around £200 per year at current electricity prices, which isn’t a brilliant return on investment considering the usual cost of a solar battery. We've based this figure on the typical amount of spare electricity generated by a solar PV system installed on a three-bedroom home (1,492 kWh).

In short, the answer to whether a solar battery is worth it in the UK is mixed. On one hand, it’ll help you store solar energy instead of letting it go to waste. You’ll then be able to use that stored energy when the sun isn’t out, effectively helping you remove (or massively reduce) your reliance on the National Grid for electricity.

On the other hand, the upfront cost of solar batteries and the fact that you almost certainly won’t break even with one, means they’re not really worth it from a financial point of view.

What if I don’t have a solar battery?

If you don’t have a solar battery, you’ll most likely end up losing around 50% of the power your solar panels produce. This is because without solar batteries, the electricity generated by solar panels isn’t stored and must be used up as it’s generated. Otherwise, it will go straight back into the grid.

You can actually sell this extra energy back to the National Grid, through the Smart Export Guarantee (SEG), but you’ll only receive a maximum of 7.5p per kWh (which is the rate currently paid out by Octopus Energy). The SEG is a government-backed initiative that requires some energy suppliers (known as SEG licensees) to pay ‘small-scale generators’ (you, in this case) for low-carbon electricity.

At 18.9p per kWh, electricity is more expensive than what you’d get via the SEG initiative, so you’ll save money if you simply store your excess energy in your solar battery for later.

The average three-bedroom house with solar panels will generate 1,492 kWh of spare electricity per year.

However, if you could use this extra energy instead of selling it, you’d save an additional £200 for a total of £594 – and that’s where solar batteries come in.

What is the return on investment from a solar battery?

There isn’t a concrete answer on the return on investment (ROI) of solar batteries, because how much or how little you use a battery will affect how much you save. But one thing can be said for certain: using a solar battery will reduce your grid reliance, meaning you’ll spend less on your energy bills.

However, electricity prices have grown by 19% in the past three years, and show no signs of slowing down, whilst the cost of solar batteries is decreasing all the time.

This means that in the near future, saving all the electricity you generate will be profitable.

What factors influence the return on investment?

There are a number of things that affect the ROI of solar batteries, including battery capacity, battery degradation, and the fluctuation of electricity prices.

If your battery capacity is too small, you won’t be able to store as much electricity, which might mean you’ll end up using an unnecessary amount of electricity from the grid. If you live in a larger property, you should consider a battery with a bigger capacity.

The degradation of a solar battery matters as well. Some batteries, such as the Tesla Powerwall, have low degradation rates that allow them to be used again and again with little issue. Other batteries don’t last as long, meaning you’ll have to replace them sooner.

Changing prices of electricity has a simple impact – when prices for electricity are lower, the ROI on a solar battery decreases, because it becomes more affordable to use electricity from the grid. Higher grid electricity prices make storing your own energy in solar batteries much more worthwhile.

How popular are solar batteries in the UK?

In contrast, the number of homes using solar batteries is currently only around 10,000. This might sound small, but when you factor in the average cost of a battery (between £4,000–£8000) and add it to the £5,000 or so for solar panels, it makes sense.

However, interest in solar batteries is definitely increasing. A survey in 2019 by Which.co.uk found that just 6% of solar panel owners had their own batteries, but 74% would consider buying one. This is up from the 2018 results, in which roughly 60% of respondents said they’d consider a solar battery.

If you’d like to see the best solar batteries on the market in 2022, take a look at our choices.

If you can afford them, solar batteries are a worthwhile investment for their convenience alone. You can rest easy knowing that if you have a power cut, your battery will come to the rescue. They’re especially good if you’re looking to move completely off-grid, as with good management, enough power, and a large enough capacity, a solar battery can ensure you never run out of electricity.

Unfortunately, the upfront cost of solar batteries will continue to put them out of reach for a while yet, but this is slowly getting better. For now, the simple fact is that even when factoring in the savings from not buying grid electricity, solar batteries are expensive pieces of kit.

For those ready to invest in a solar system, you can simply fill in this webform, and our qualified installers will get in touch.