The Environmental Impact of the UK’s Pet Ownership Surge

✔ Pets in the UK now emit 1.3 million tonnes more CO2e than before COVID-19

✔ Dogs are responsible for more than half of this total

The COVID-19 pandemic has led a huge rise in the number of pets adopted by households all over the country.

Millions of people have decided, reasonably, that an animal will provide them with the love, companionship, and distraction they need while they endure the most challenging period of time in memory.

We’ve looked into how this rise in pet numbers has impacted the UK’s fight against climate change, and explained a couple of ways you can minimise your pet’s emissions. 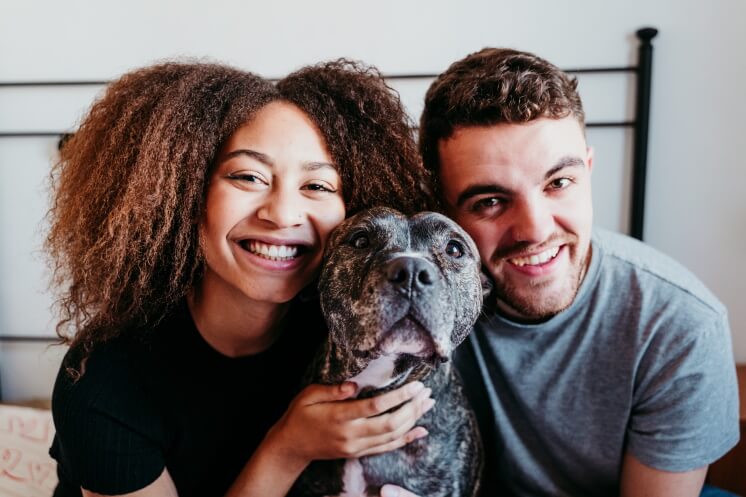 Pets have been adopted at a rapid rate during the pandemic.

11% of all households have welcomed a new pet during this time, according to the Pet Food Manufacturers Association.

This is a huge rise, especially when you consider that pet numbers had stayed stable for the past decade.

The number of pet owners hasn’t increased significantly during the pandemic, but the number of pets has. That’s because 95% of new pets went to people who already owned a pet, according to LetterOne.

41% of pet owners now have at least one animal who they adopted over the course of COVID-19.

People aged 25 to 34 – millennials, basically – were the most likely to get a new pet during lockdown, according to the People's Dispensary for Sick Animals (PDSA).

The rush for animal companionship started early. In the last week before the UK went into the first lockdown – 16-22 March 2020 – Battersea Dogs and Cats Home rehomed more than twice as many dogs and cats as it did during the same week in 2019.

During the second quarter of 2020, the Kennel Club recorded an 11.5% increase in dog registrations, compared to the same period in 2019.

And this rush continued. In October, Linda Cantle of Wood Green animal charity told PFMA: “Demand for pets over the past few months has soared. Enquiries increased by more than 253% during lockdown”.

In November, the parliamentary select committee that deals with environmental issues stated: “Recent statistics show that demand for dogs in the UK has surged dramatically as a result of COVID-19 lockdown measures”.

How much is that doggie in the window?

This elevated demand led to costs spiralling. Dogs Trust found that prices for some dog breeds rose to record levels during the pandemic, as demand shot up.

This led to more dogs being brought to the UK to be sold. The number of licences issued for dogs to be imported for commercial reasons rose 87% during May to September 2019, compared to the same stretch of time in 2020.

Pets across the nation now emit 1.3 million tonnes more of CO2e than they did before COVID-19.

That’s the same amount of CO2e given off by 743,629 cars in 2019, according to government data on emissions and cars.

How did we work this out?

Cats and dogs which are kept as pets release 0.39 tonnes of CO2e* per year, on average, according to a University of California, Los Angeles (UCLA) study.

Rabbits emit a similar amount, releasing 0.45 tonnes per year, according to a Polytechnic University of Valencia study.

3.1 million households have adopted at least one animal since the start of the pandemic.

8% of dogs, 6% of cats, and 3% of rabbits have also gained weight during this time that they usually wouldn’t, according to the PDSA – and while we’re certainly not here to fat-shame, this unfortunately only exacerbates their negative impact on the climate.

What can you do to limit your pets’ environmental impact?

Professor Gregory Okin, who authored the UCLA study, was keen to distance himself from the Grinch-like position of calling for the end of all pets, saying: “People love their pets. They provide a host of real and perceived benefits to people.”

He added: “This analysis does not mean to imply that dog and cat ownership should be curtailed for environmental reasons, but neither should we view it as an unalloyed good.”

Here are some ways in which you can ensure your pet does their part towards fighting climate change.

Get a less polluting pet

Professor Okin recommended “reducing the rate of dog and cat ownership, perhaps in favor of other pets that offer similar health and emotional benefits”.

He said that “both small (e.g.: birds and hamsters) and large animals (e.g.: horses)” have been shown to be associated with important benefits, including friendship, verbal interaction, companionship, promoting self-care, and increased empathy.”

You may therefore want to look at adopting a hamster, bird, or lizard, as they emit a lower amount of greenhouse gases than larger creatures.

Of course, not everyone wants to compromise on their choice of animal.

Professor Okin had some advice for people who don’t want to give up their pets, but do want to help the environment.

“Efforts to reduce overfeeding, reduce waste, and find alternative sources of protein will also reduce these impacts”, he wrote.

So if you can get your pet onto a plant-based diet, that would be ideal, but if not, focus on giving them animal by-products like bone meal, which humans are much less likely to consume.

Cut yourself some slack – humans are worse

If you find it difficult to make these changes, try to think up new ways to achieve your goals – but also, don’t feel too guilty.

As well as getting 3.1 million new pets during the pandemic, households also welcomed 311,916 babies from April to September 2020 in England and Wales, according to the ONS.

As we’re each responsible for 6.82 tonnes of CO2e per year, that number of births means an extra 2.1 million tonnes of annual emissions – but no-one’s saying we should stop having babies.

Using clean energy, eating plant-based diets instead of livestock, stopping deforestation, and creating better waste disposal systems – these are the routes to a better future, not giving up Fido, Smudge, or Whiskers.