Home » Solar Panels » Where Do the UK’s Political Parties Stand on the Environment? 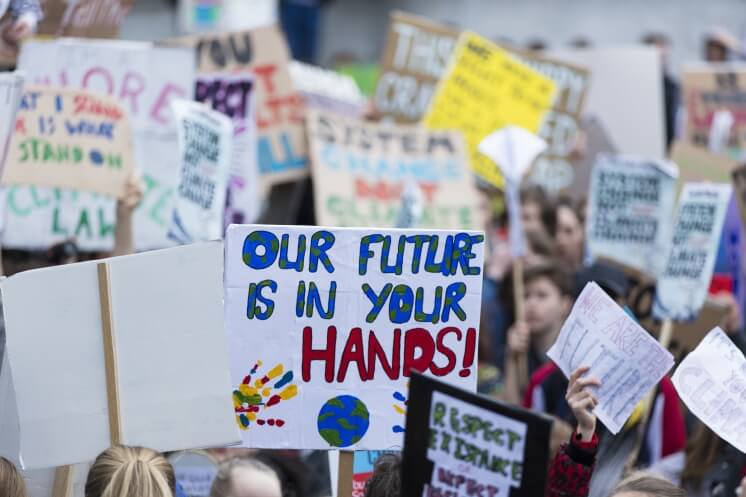 The 2019 General Election was the first since the UK took the unprecedented step to declare a climate emergency, so it made sense the environment took centre stage during the campaign.

The Conservatives, Labour, Lib Dems, Greens, and SNP all laid down deadlines for the UK to reach net zero carbon emissions. They all promised to spend billions fighting climate change, and vowed to plant huge numbers of trees over the next few years.

But the UK’s third election in four and a half years led to a resounding victory for the Conservatives, the least enthusiastic major party when it comes to the climate and renewable energy. They won their biggest majority since 1987, a total of 365 seats.

If they're held to their manifesto, you can expect the next five years to see a £13.84 billion investment in the environment, including:

Beyond these goals, let's take a look at what our new government stands – and the bolder stances the other parties have taken.

Climate change has become a huge issue in recent times

The Conservatives' manifesto may have promised a £13.84 billion investment in the environment, but it also included many pledges to “support” and “enable” climate-friendly proposals, without clear paths to achieving goals.

This is no surprise when you consider that Prime Minister Boris Johnson has a 0% rating in The Guardian’s MP climate score tracker.

This was in stark contrast to Labour’s leading figures, as well as Green Party MP Caroline Lucas, who scored 92%. The only bill she opposed was to subsidise nuclear power, which is a low-carbon source, but is not renewable.

Johnson has voted against every climate-friendly bill he’s been present for in Parliament since 2008. He has repeatedly accepted funding from climate-sceptic organisations, and is the only party leader to refuse to participate in a televised climate debate.

The Conservative Party has promised to create “two million new high quality jobs in clean growth” in the next decade.

And when the latest election became a reality, the Conservatives’ attitude towards the climate was demonstrated by their decision to hire fracking lobbyist Rachel Wolf to put together their manifesto.

The government has also cut subsidies to onshore wind, and raised taxes on solar battery materials. And even though a £13.84 billion climate plan sounds impressive, it pales in comparison with other parties.

Here's some more information and analysis of their pledges, together with other actions they've taken during their time in power.

Labour fell to the party's worst general election defeat since 1935, despite proposing much more enterprising aims for the environment than the Conservatives. A proposed £250 billion Green Transformation Fund showed how much Labour values the environment and fighting climate change – and there's every reason to suspect the party will carry on doing so while in opposition.

The party’s leadership watered down the motion, passed at its 2019 conference, for zero net emissions by 2030, instead aiming for most carbon emissions to be wiped out by that date – but that manifesto commitment was still well ahead of the Conservative government’s target.

Three times as many people in the UK considered the environment to be one of the three most important issues before the 2019 general election compared to the 2017 election, according to YouGov.

Labour also put forward a target for 90% of electricity to be produced through renewable sources, which would have been a huge help to the climate.

The party’s emphasis in its manifesto on transport fuelled by renewable sources and insulating every single household in the UK was also admirable – particularly as these plans would have cost £310bn – 22 times the cost of all the Conservatives' aims for the climate.

Labour MPs had an 86% success rate when it came to voting for climate-friendly bills in parliament before the election, placing them behind only the SNP (100%) and the Greens (92%). Their manifesto reflected this enthusiasm for the environment.

Here's where Labour currently stands on the environment, in contrast to our new government.

The Lib Dems ended up with one seat less than the last general election, with Jo Swinson losing her positions as MP and leader. They were also positive about the need to fight climate change.

In its manifesto, the party has committed to reaching net zero greenhouse gas emissions by 2045, five years before the Conservatives. It condemned other parties’ proposed deadlines for this goal as a “Dutch auction of fantasy dates”.

“We will deliver a ten-year emergency programme to cut emissions substantially straight away, and phase out emissions from the remaining hard-to-treat sectors by 2045 at the latest.”

The centre-left party was willing to spend £100bn to tackle climate change specifically – seven times more than the Conservatives have budgeted for the environment as a whole.

The Lib Dems also wanted all new cars and small vans to be electric by 2030, and were aiming to plant 60 million trees per year by 2025 (300 million overall). That’s twice as many as the Conservatives, but less than half the 700 million trees proposed by the Greens.

Here are the party's other aims when it comes to the climate.

Unsurprisingly, the Greens were the most passionate and ambitious in their climate goals – and it paid off. The party didn't gain any seats, but did increase its vote share from 1.6% to 2.7% – a 69% increase in popularity.

This may have been down to just how far they wanted to go. The Greens were the only party aiming to get to net zero carbon emissions by 2030, and to make this happen, they wanted to create a green new deal worth £1tn over 10 years.

This plan, which the party admitted at the time would have been paid for through borrowing, was front and centre in its manifesto.

“Our very planet is raising the alarm. Hitting snooze for another 15 years is simply not an option.”

The Greens also pledged to plant 700 million trees by 2030 – the same year which would have, according to their plan, seen the end of petrol and diesel cars in the UK.

They also aimed to build 100,000 new zero carbon homes for social rent each year, and upgrade 10 million homes to the top energy rating by 2030.

All of this spending would have created millions of new jobs, the party said, and would have been partly funded by climate-friendly taxes on plastics, meat, and dairy products.

The SNP came out of the election with 13 more seats, after winning a landslide 48 out of 59 seats in Scotland. The party has been in power for more than a decade – and that's good news for the climate.

MPs in Scotland’s largest party (and the third-largest in the UK) can proudly boast a 100% pro-climate voting record in the House of Commons.

They can also point to their record on green energy, which has been extremely impressive over the past few years. In 2018, 75% of the country’s energy came from renewable sources.

“Scotland is a world leader in renewable energy and the fight against climate change.”

Just to emphasise that point, Scotland currently produces 25% of the UK’s renewable energy, despite containing just 8% of its population.

By 2030, the SNP wants to reduce carbon emissions by 75%, which is an ambitious goal – but if Scotland’s shown us anything over the past decade, it’s that big targets are achievable.

Let's look at the other goals the SNP has set for itself, and its record on the climate thus far.

The most important – and positive – conclusion you can draw from analysing the major parties’ policies is that the climate crisis is finally being taken seriously.

The Greens were clearly out in front before the general election, with their £1tn plan to reach net zero carbon emissions by 2030, and they will continue to blaze a trail for the other parties.

Their aims for the UK to contain 700 million more trees, no petrol or diesel cars, a completely electrified rail network, and 10 million more homes with the top energy rating will move the needle on important issues.

They’re trying to push the boundaries of what’s possible, and other parties are paying attention – though the SNP also deserves a special shoutout for its work in Scotland, and provides a ray of light for those despairing over the Conservatives' heavy victory.