The Most Polluted Countries in the World

Pollution is the main driver of climate change, and the main issue facing humanity.

Air pollution leads to seven million deaths per year, according to the World Health Organisation (WHO).

Unsafe water sources cause another 1.2 million deaths annually, according to Our World in Data.

And excessive light pollution can disrupt ecosystems, cause animal deaths, and lead to more stress, anxiety, fatigue, and even cancer in humans.

If you’d like to learn more about how we reached our conclusions, check out our methodology below.

The full rankings are also lower down, but for now, let’s see the top 10.

The 10 most polluted countries 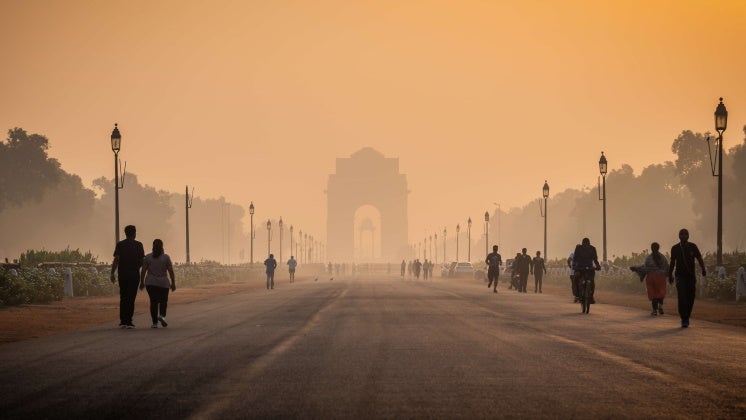 India is the most polluted country in the world – by far. It finished with the biggest margin between any two entrants on our 98-country list, a massive 56-point chasm emphasising the deep issues in the nation.

It’s no wonder that India is home to six of the 10 most polluted cities in the world.

The country has the second-worst air pollution of any country, the fifth-worst light pollution, and came 16th-worst water pollution.

The annual mean PM2.5* concentration limit recommended by the World Health Organisation (WHO) is 10 micrograms (μg) per m³. India’s is 91 μg/m³.

WHO also states that countries should aim for an annual average PM10* concentration of 25 μg/m³. India’s is 109 μg/m³.

This has disastrous consequences, with air pollution alone causing 1.7 million premature deaths in 2019 – 18% of all fatalities.

That’s more than one in six deaths, brought about simply by the air you breathe.

*particulate matter with diameter of less than 2.5 micrometers

**particulate matter with diameter of less than 10 micrometers

The most populous country in Africa suffers from significant air, light, and water pollution, bringing unnecessary death and disease to its 200 million people.

In just Lagos, air pollution is responsible for 11,200 premature deaths.

The three main sources are road transport, industrial emissions and large diesel generators, which all run on outdated fuels and therefore release a tremendous amount of dangerous emissions.

The country is also home to a large amount of open waste burning and illegal dumping – and there’s barely any pushback from the authorities.

Ako Amadi, an environmentalist who lives in Lagos, told Undark Magazine: “The Nigerian government lacks the necessary statutory and financial provisions to oversee the intrusive consequences of industrialisation.

“Many in government feel that this [pollution] is the price to pay for the much-needed industrialisation.”

The newest country in the world has experienced conflict and widespread poverty since its birth in 2011.

Its reliance on oil – 90% of its revenue comes from the fuel – has come with devastating side-effects.

The oil industry has left hundreds of open waste holes, while the water and soil has been contaminated with toxic chemicals and heavy metals like arsenic, manganese, and mercury, according to the Associated Press.

There have also been reports of widespread birth defects, miscarriages, and infertility from local residents.

The South Sudanese government buried reports which contained this information.

The nation also has the third-most polluted water in the world, which exacerbates the poverty endured by more than 80% of the population.

The second-largest island country in the world after Indonesia has many of the same issues as other heavily polluted countries, not least from poorly regulated fuels that produce a copious amount of emissions from traffic and industry, causing heavy smog.

It also doesn’t help that there’s a substantial reliance on solid biomass like crops and wood for cooking, as burning biomass emits far more pollution than other methods.

The nation’s water pollution, which is primarily caused by sewage running into the drinking supply, means that just 31% of people in rural regions have access to pure drinking water. 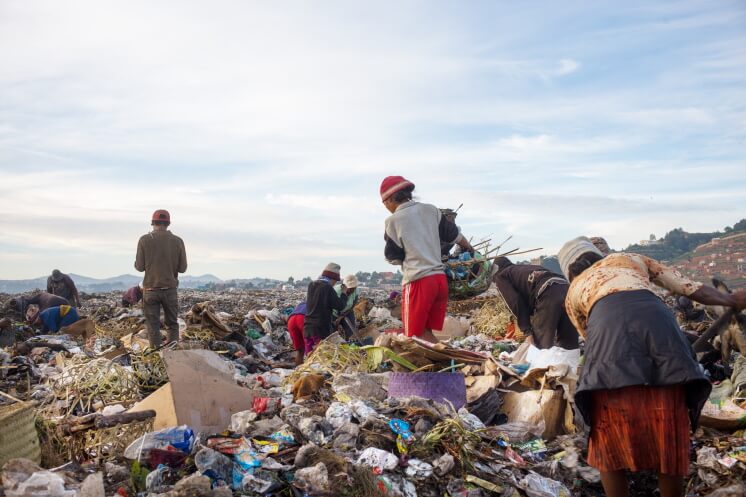 India’s neighbour has the third-worst air pollution in the world, and also places in the top 50 for both light and water pollution.

Residents of the fifth-most populous country in the world are subjected to unregulated industry emissions, awful levels of traffic pollution with large amounts of sulphur, and the open burning of garbage and plastic every day.

One in 10 deaths in children under the age of five are down to air pollution.

The country’s second-biggest city, Lahore, has cut down 70% of its trees to make way for more housing, while industries burn tires for energy, thousands of brick kilns burn rubber, and countless farmers set their fields on fire to make way for new crops.

The Central African Republic (CAR) has the most polluted water on Earth.

The country has 141 trillion litres in renewable water sources for less than five million people, but the tap water isn’t drinkable.

In all, 70% of the nation’s population doesn’t have access to clean drinking water, and around 75% aren’t able to use clean sanitary facilities.

It’s little wonder that CAR has by far the highest death rate from unsafe water in the world, at a rate of 150.31 fatalities per 100,000 people.

Efforts to fix this situation are hampered by the nation’s ongoing civil war.

Directly below CAR in the water pollution rankings is Chad, its northern neighbour.

The country is one of the most troubled in the world, with extensive poverty, corruption, and human rights abuses – as well as extreme levels of pollution.

Just 43% of citizens have access to clean drinking water, and only 10% are able to use sanitary facilities, according to UNICEF.

This lack of sanitary services forces 68% of people to defecate in the open, which contributes to both air and water pollution.

All of this leads to a life expectancy of 54.2 years and a poverty rate of 80%, according to the United Nations (UN).

8. Democratic Republic of the Congo

The second-largest nation in Africa relies heavily on mining, which pollutes both the air and the water supply.

Thousands of residents are exposed to dangerous amounts of toxic pollution from cobalt mining that supplies the materials needed for rechargeable batteries which go in smartphones and laptops, according to a 2020 study published in The Lancet.

The pollution has led to a much higher rate of birth defects in the surrounding areas.

And as with many other countries on this list, conflict has stymied any attempts to lower pollution levels, with millions displaced and 600,000 citizens fleeing to neighbouring nations.

This has all contributed to the fact that only 12 countries are worse off than the DRC, according to the UN’s Health Development Index.

That’s still better than Niger, which ranks last in the Health Development Index, below all other 188 countries.

More than 10 million citizens in a country of 23 million lack access to clean water, and 18.5 million – 79% – aren’t able to use proper sanitary facilities.

This leads directly to unnecessary, premature deaths, with around 9,800 children under five dying each year from diarrhoea.

The air is heavily polluted by mining, the cement, brick, and oil industries, vehicle emissions, and people who use biomass for cooking, heating, and lighting.

If this wasn’t enough, Sahara desert sand and dust mixes with these fumes to create a near-unbreathable cocktail of toxic air.

Niger’s average annual concentration of PM2.5 is 94μg/m³ – more than nine times the guideline created by WHO.

Eritrea has the fourth-highest death rate from unsafe water in the world.

42% of people in this northeastern African nation don’t have access to safe drinking water, and 81% lack access to basic water services.

This forces citizens to use sources like rivers and streams for cooking, cleaning, and hygiene, which leads to contamination and fatal diseases like diarrhoea and cholera.

Eritrea also suffers from 2,200 premature deaths every year, due to air pollution.

You would assume that residents have an appetite for change and improvement in this area, but it’s hard to know, as Eritrea ranks third-bottom in the Press Freedom Index, behind only North Korea and Turkmenistan.

Which continent has the most polluted countries?

Africa has 34 countries in our top 50 most polluted nations, which is by far the most of any continent.

That means that out of all 54 African countries, 63% are in the top 50, compared with 13 out of 48 Asian nations, and zero European countries.

You have to go down to number 60 for the most polluted country in Europe, which is Serbia.

All the countries on the top 10 list are poor, incredibly large, or a mixture of both. They didn’t choose to be so polluted, and there are complex and important historical reasons why they’re in trouble, with a lot of the blame falling on Europe and the global west in general.

In terms of what we can do now, wealthier nations must help struggling countries in Africa and Asia to tighten fuel restrictions, use renewable energy, and access clean water for drinking and sanitation.

Reducing pollution helps the entire world. We could massively cut the number of people dying before their time, prevent diseases from spreading, and provide a path to dignity and fulfilment for billions of humans.

We ranked countries according to their PM2.5 and PM10 concentration levels, and gave each nation a score based on that ranking.

We then ranked them according to the number of deaths from air pollution, and doubled the points this section gave each country. By combining these three categories, we could then give each nation an overall score and ranking for air pollution.

We also ranked and scored each nation for how high their light pollution and death rate from unsafe water is, using data from NASA’s Visible Infrared Imaging Radiometer Suite and Our World in Data, respectively.

However, because contaminated air and water cause a huge number of deaths each year, we placed twice as much importance on air and water pollution in the final scores.

The top countries for these categories received 200 points, then 198 for the second-placed nation, and so on, while the country with the most light pollution table got 100 points – making 500 the top score any nation could have reached.