The Most Polluted Cities in the World

✔ Delhi is the most polluted city in the world

✔ Six of the 10 most polluted cities are in India

✔ Moscow is the most polluted European city

Pollution leads to millions of deaths, poisons the environment, and generally turns our miracle of a habitable planet into a human-made disaster.

Air pollution kills seven million people every year, according to the World Health Organisation (WHO), in countries across the world.

Excessive light pollution can disrupt ecosystems, cause animal deaths, and lead to more stress, anxiety, fatigue, and even cancer in humans.

And at least 10,000 deaths in Europe each year are due to noise pollution, according to European Union data – a number that the report’s authors have said is “significantly underestimated”.

It also contributes to health issues, from high blood pressure to type 2 diabetes and heart attacks.

We’ve measured air, light, and noise pollution in cities around the world, to show where improvements are most desperately needed. The full rankings are below, but let’s start with the 10 cities which inflict the most pollution on their residents.

If you’d like to understand how we reached our conclusions, check out our methodology below.

The 10 most polluted cities 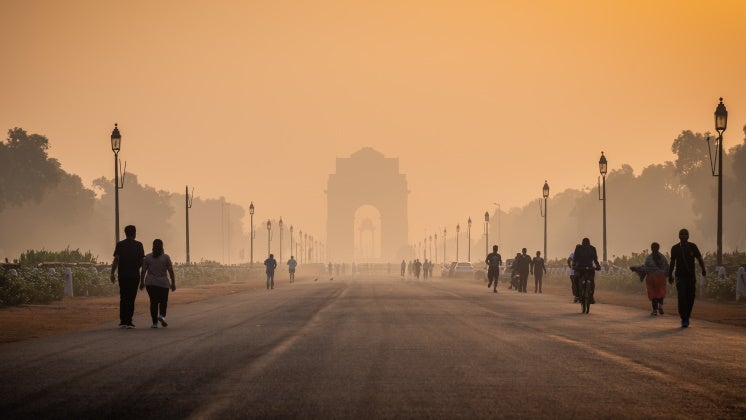 India’s second-most populated city is the world’s most polluted city.

Delhi has the eighth-highest levels of air pollution of any city, and is the second-noisiest place in the world, behind only Guangzhou in China.

During 2020, the lockdowns prompted by the COVID-19 pandemic led to a rise in air quality that meant for the first time in years, residents in this northern city saw clear blue skies.

Despite this, air pollution led to around 54,000 deaths in Delhi over the course of the year.

For comparison, COVID-19 has killed around 11,000 people in Delhi, as of February 2021, even though the virus leads to more deaths when the air quality is poor.

You can – and should – blame local cars, coal-fuelled power plants, and industrial fires, but the most noticeable contributor is crop burning.

In late September each year, nearby rice farmers illegally set fire to their fields to quickly clear the ground for the next crop, which is wheat.

As millions of crop waste goes up in flames, a heavy orange smog settles over Delhi. The air quality doesn’t recover for several months, by which point you’re closer to the next round of crop burning than the last.

It’s only the sixth-biggest city in Pakistan, but Peshawar’s air pollution levels set it apart.

The city’s PM2.5* level is 10 times over WHO’s air quality guidelines, while the concentration of PM10 in the air takes the cake, at 26 times over the guideline.

That means that if you took Peshawar’s excess PM10 level and shared it among 26 other cities, you’d meet the guideline.

Many vehicles in the city run on diesel or an inferior quality fuel, resulting in worse emissions than necessary, but the main issue is Peshawar’s 450 brick kilns.

These kilns produce massive amounts of pollution, not least by burning fuels like rubber, which leads to losses in productivity from the city’s residents, due to respiratory issues.

If the government reduced emissions levels from brick kilns to a healthy level, the city would recover 108 million Pakistani rupees (£720,000) in lost productivity costs, according to a study from Peshawar’s Institute of Management Sciences.

*particulate matter with diameter of less than 2.5 micrometers

**particulate matter with diameter of less than 10 micrometers

This northern city, which is close to Delhi only in Indian terms (that is, 500km away), has the highest concentration of PM2.5 in the world.

In the industrial hub of Uttar Pradesh – India’s most populated state – too many industries in the city burn coal, and too many citizens use harmful biomass boilers.

Vehicles in Kanpur pump emissions into the air on a daily basis while driving on mostly unpaved roads, and local leather tanneries release dangerous emissions.

Professor Sachchida Nand Tripathi, who heads up the Indian Institute of Technology Kanpur’s civil engineering department, told Reuters: “The state government does not have the mechanism to understand the sources of air pollution, how will they tackle it?”

The professor added: “The state needs to act. This was very much coming.”

22% of all deaths in Pakistan are due to pollution, and Rawalpindi is the second-biggest offender.

Locals all suffer due to fumes from wood stoves, biomass fires, and the open incineration of waste – including dead plant matter and dung.

The concentration of PM2.5 in the air is 10 times over the WHO’s guidelines, while PM10 levels sit a massive 21 times above the guidelines.

The air pollution found in Rawalpindi can lead to more instances of cancer, ischemic heart disease, and liver and kidney damage, according to IQAir.

Faridabad, which is in the same region as Delhi, is famous in India for producing and exporting henna, a dye created using plant material that’s used for temporary body art and to change people’s hair colour.

Like many cities on this list, Faridabad’s streets are full of old vehicles, many of which run on diesel and have to navigate around construction sites and roadworks – which also send particulate matter of all sizes into the air.

Refuse is burned in the open, along with rubber and plastic, producing dark plumes of deadly smoke.

Unregulated sand mining, construction projects, and stone mining have left a trail of destruction to the local environment and air quality.

The city is home to so much illegal stone quarrying that it’s left a 300-foot crater in the local Gere Hills, and a legacy of airborne particulates.

Gaya doesn’t have a sewage treatment and disposal system, while ancient buses and diesel cars in the city release massive amounts of pollution, and local food outlets burn coal every day to cook for customers. 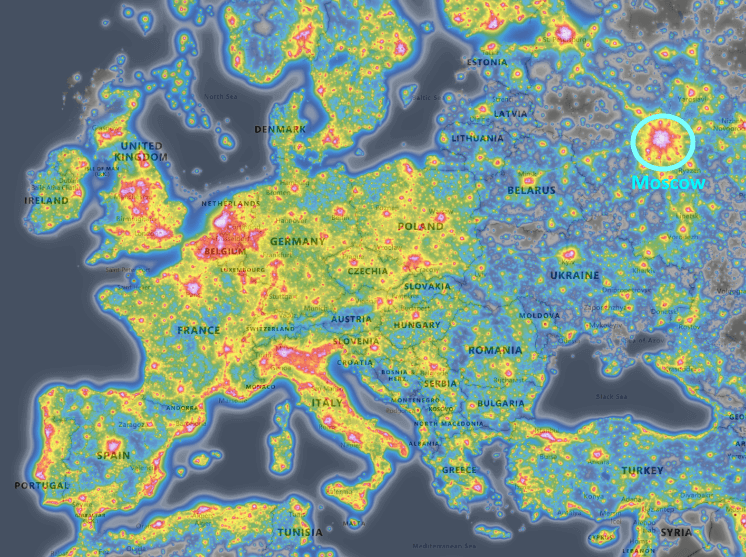 Moscow is the highest European city on the list – by far. The next one is Barcelona, at number 43.

The Russian capital’s air pollution is not especially bad on a global level – it’s not included in the world’s top 500 worst cities – but as you can see above, its light pollution level is the highest of any city in the world.

Moscow’s level of excess light is 8.1 times the global average for urban areas.

And that’s not all: Moscow is also the eleventh-noisiest city on Earth

This has been a long-standing issue. Back in 2007, 70% of the city was in a zone of noise discomfort, according to the local Environmental Health Service.

Fines can be imposed on people who break noise regulations, but rarely are.

This 2,500-year-old city on the southern bank of the Ganges River suffers from a number of air pollution problems that will be familiar to anyone who’s read about the other Indian cities in this article.

Rubbish is dumped and burned at massive landfill sites in the city, including one in the Ramachak-Bairiya village that takes up 74 acres of land.

Imagine 42 football pitches, full of garbage, set on fire. Every day. That’s the equivalent – and there are dozens of sites.

Waste is separated in only three of the city’s 75 municipal wards, according to a news report from 2020.

And like Delhi, Patna suffers from farmers burning their fields to make room for the next round of crops.

Brick kilns, unnecessarily polluting vehicles, and poor management of the particulate pollution that’s produced at construction sites also all contribute to the poor air in the city.

The government began implementing its plan to bring cleaner air to Patna two years ago – but things haven’t changed much.

Varanasi is the spiritual capital of India – it’s where Buddhism was founded, and is the holiest site for followers of both Hinduism and Jainism.

It’s also one of the most polluted cities in the world, with harmful emissions that come from industrial factories, construction sites, traffic, diesel generators, and open fires lit by deprived residents with whatever they can find.

Uttar Pradesh – the state Varanasi is in – also contains at least 18 coal-fired power plants, which lowers the region’s air quality in much the same way the farmers do when they burn their fields.

The Karsada plant in Varanasi has the capacity to burn 44 tonnes of coal per day.

Buenos Aires means “fair winds” in Spanish, which is ironic for the tenth-most polluted city in the world.

But the air in Argentina’s capital doesn’t carry dangerous particulates – it carries noise.

15.6 million people live in Buenos Aires, which is more than a third of the country’s population largely crammed into high-rise flats on long, straight streets that carry the sound for huge stretches.

The heat has also led many of these people to run loud air conditioners all day long.

When they venture outside, they’re met with the sound of trains, construction work, horns blaring in traffic jams, and the screeching of outdated buses braking before they speed along more cobbled streets.

But Buenos Aires isn’t just the most polluted city in South America because of the noise; it also suffers from the sixth-worst light pollution of any city on Earth, mostly due to a multitude of advertising signs and brightly lit buildings.

At 3.5 times brighter than the worldwide average for urban areas, the so-called ‘Paris of South America’ has a better claim to being the City of Lights than its French counterpart.

Which country has the most dangerously polluted cities?

China contains 283 of the 500 worst cities in the world for air pollution, according to WHO data.

This means 59% of the most dangerous locations to breathe are in China – a country which is the most populated on Earth, and is still home to just 18% of people.

The next worst national offender was Iran, with 44 cities, followed by India with 32 and Chile with 20.

Poland topped the charts in Europe, while South Africa contains twice the number of cities with dangerous levels of air pollution as the next African country, Cameroon.

China also has three of the 12 noisiest cities on Earth, in the shape of Guangzhou, Beijing, and Shanghai.

We sourced our air pollution data from WHO, used noise pollution statistics reported by the World Economic Forum, and collected light pollution figures from environmental news site The Revelator.

We noted the extent to which each city’s PM2.5 and PM10 levels had exceeded the World Health Organisation’s air quality guideline values, combined these numbers to form an overall score, and used these scores to rank the cities.

We then gave out our own points to cities. For both the noise and light pollution categories, we gave 50 to the worst offender, 49 to the second-worst, and so on.

Because air pollution has the biggest effect on people’s health, we doubled the points in that section, which is why – for example – we’ve ranked Peshawar as the second-most polluted city on the sole basis of its terrible air quality.