✔ 90% of Tudors had no carbon footprint

Yep, that tiny orange dot is you

You might think, understandably, that living in the Tudor period means the king’s emissions of carbon dioxide, methane, nitrous oxide, and fluorinated gases – which creates your carbon footprint – were limited.

(To clarify, a carbon footprint doesn’t just include the CO2 you’re responsible for. All of your greenhouse gas emissions count towards the overall number, which is measured in metric tons of carbon dioxide equivalent.)

Methane doesn’t get mentioned as much as CO2 in the climate change discussion, but the BBC has said “it produces 21 times as much warming as CO2.”

After all, almost all our modern pitfalls didn’t exist: the widespread use of coal as a fuel was still decades away, fluorinated gases weren’t being used, and nitrous oxide production was limited.

Plus, around 90% of England and Wales’ 2.35 million residents lived in sustainable, biodegradable farming communities, and therefore had no discernible carbon footprint. 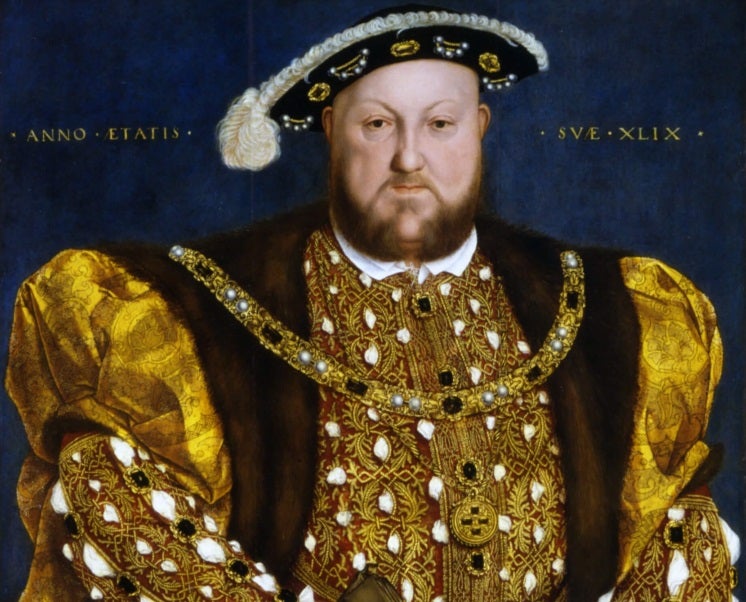 He destroyed forests in pursuit of a bigger navy, passed a law which led to the deaths of millions of birds and mammals, and ordered wars and executions that killed more than 100,000 people.

We’re going to find out the equivalent metric tons of CO2 (CO2e) this larger-than-life king was responsible for. That means we’ll multiply non-CO2 gases by their global-warming potential (GWP), when compared with CO2.

Henry VIII notoriously enjoyed his food – and though the king probably never threw bare bones over his shoulder as the Tudor stereotype suggests, he certainly indulged himself to excess.

Henry consumed 5,000 calories per day, mostly through meat and other rich foods which denoted his status – and probably ended up giving him gout and diabetes.

This would’ve been bad enough, but he was also responsible for the eating habits of his 1,200 staff. If he didn’t employ them, financial necessities would have steered them away from an expensive, heavy diet of meat.

These animals, which were reared for consumption by Henry VIII's court, produced 103.6 million metric tons of methane each year, for 38 years. If the courtiers hadn’t been living in the palace, they would have been responsible for an average of just 792 metric tons.

If everyone in the UK today was equally responsible for methane emissions, then the royal court alone created as much methane as 156.9 million people in the UK are responsible for now – more than twice the country’s current population.

See the yellow circle? To the right of the enormous blue blob? That’s you. Feel better about your emissions now?

Henry VIII had a 12 foot-tall wine fountain at Hampton Court.

Plus, he held countless special banquets, as he did in France, at The Field of the Cloth of Gold.

Wood chopped down and burned

Known as “The Father of the Royal Navy”, Henry invested heavily in England’s marine forces, taking the country’s naval fleet from a handful of ships to more than 50.

These ships were each made from around 2,000 trees, making a grand total of 100,000 trees which Henry had cut down for his navy.

This was deforestation, which is the second-largest human source of CO2 emissions, after fossil fuel usage.

In Henry’s case, it would’ve led to 4,082 metric tons of CO2 entering the atmosphere. Many of these ships were also burned during the king’s numerous wars, resulting in even more CO2 being released.

11% of our current global carbon footprint is down to CO2 emissions from forestry.

However, Henry’s relationship with trees wasn’t all bad. In 1543, he passed the Act for the Preservation of Woods, preventing shipbuilders from felling too many young oak trees.

466 years later, Prince Charles called it “the very first piece of green legislation in this country” – but that seems high praise for a king concerned with protecting his military and his firewood.

Henry was certainly on to something though, as his reign was followed by a firewood supply crisis lasting until the end of the 1600s. This period was marked by the start of the rise of coal – a disastrous part of human history that is largely why we’re facing such catastrophic climate change today.

Around 4,646 trees would have been required every year, leading to emissions across Henry’s reign of 7,204.8 metric tons of CO2.

Henry had four children who he acknowledged as his own, and who survived beyond the first two months of life.

These were Queen Mary I, Queen Elizabeth I, King Edward VI, and the only illegitimate child recognised by Henry, Duke Henry Fitzroy.

Let’s excuse the carbon footprints of Edward and Henry junior, as they died before adulthood, at ages 15 and 17 respectively.

Duke Henry Fitzroy’s surname was given to him by Henry VIII and literally means “son of the king.”

Mary and Elizabeth, however, lived to 42 and 69 respectively – a combined 111 years to create carbon footprints.

Though no doubt negatively affected by their father’s overt wish for a male heir, his daughters nevertheless enjoyed all the benefits of royalty.

If we assume they had similar carbon footprints to their father while ruling England, then 111 more years of emissions are on Henry’s head.

A 2017 study found having one fewer child was the most effective pro-climate action you can take nowadays – saving up to 118 metric tons of CO2 per year.

Henry chose to have these children, and – just like their father – they had an outsized impact on the climate, as members of the most privileged and exclusive part of society.

We’re going to excuse Henry from responsibility over the carbon footprints of his grandchildren and other descendants, as he didn’t make a conscious choice to bring them into existence.

Now let’s move onto the natural cost of his actions – or to put it less forgivingly, the immense number of deaths he caused. The loss of these human and animal lives didn’t increase the size of his carbon footprint, but they were still clearly anti-climate actions.

Because in the end, what’s the point in protecting the climate if you’re going to destroy the life which it sustains?

Henry VIII wanted England to be an empire, as shown when he broke with the Pope, dissolved the monasteries, and got Parliament to declare that England was an empire, with him as its Supreme Head.

His military efforts led him to wars in Scotland, France, and modern-day Italy. This resulted in the deaths of at least 39,702 soldiers. The Battle of Flodden alone killed 11,500.

The king was also notorious for executing his rivals and other aristocrats who displeased him, killing off around 350 people in this way.

Life expectancy at the time was 35 – but if you were an aristocrat and survived to 21, you’d typically live until 71.

However, his execution death count was actually much higher. Laws under Henry handed down capital punishment for every crime, from murder and treason down to heresy, theft, begging, poaching, debt, fraud, and adultery.

There were as many as 72,000 executions during Henry’s time in power, meaning that in total, the king was responsible for the deaths of more than 112,000 people.

Humans dying doesn’t hurt the climate – rather, in a horrible way, they stop people creating larger carbon footprints – but 90% of people in England, Wales, and the countries Henry’s armies fought had a practically non-existent carbon footprint.

So why are they worth noting? Because we’re trying to stop climate change and save the Earth for a reason – and the reason is you. Or more specifically, all life on the planet, including humans. And you’re a human!

Henry VIII also oversaw numerous fiery razings of foreign lands. During the Italian War of 1521–26, English soldiers burned their way through the French countryside, and the aptly named Burning of Edinburgh in 1544 saw Henry’s army set at least 36 villages on fire.

This was absolutely Henry’s intention, as he told the Earl of Hertford to leave no structure untouched by his path of destruction.

“Put all to fire and sword, burn Edinburgh town, so razed and defaced when you have sacked and gotten what ye can of it, as there may remain forever a perpetual memory of the vengeance of God”.

Burning the buildings probably would have produced minimal CO2 emissions from the inhabitants’ belongings – as well as the buildings’ thatched roofs and wooden frames – but the human cost was high, with around 400 people murdered.

In what would be classed as a war crime in present day England, Henry VIII told the Earl that his forces should kill all who they saw in horrific fashion.

“Burn and subvert it and all the rest, putting man, woman, and child to fire and sword without exception.”

The Preservation of Grain Act, passed by Henry in 1532, was disastrous for the animal population of England and Wales.

The sheer scale of creatures killed and the accompanying damage to ecosystems was even greater than the human cost noted above, with millions of birds and mammals murdered as a direct result of the law.

Poor harvests required a scapegoat, and Henry found a great deal of them. He put together a list of “vermin” he blamed for disease and stealing food, including the wild cat, pine marten, hedgehog, chough, woodpecker, shag, kingfisher, badger, kite, raven, and polecat.

Each creature had a bounty on their head, ranging from a penny for the head of a raven to 12 pence for a fox. Considering the average wage was four pence per day at this time, these rewards were high.

Henry VIII owned at least 60 homes, and travelled between them with an entourage of roughly 1,500 people.

And if Henry’s subjects needed any more motivation, there were fines for any community that didn’t murder a sufficient number of listed animals.

Former RSPB director Roger Lovegrove told The Guardian that the effects can still be felt today, saying: “Wildlife and ecology suffered – and continues to suffer – to an extreme extent from the systematic medieval attempts to eradicate certain species.”

Hedgehogs were falsely accused of sucking milk from sleeping cows under cover of night. Perhaps because of this myth, they suffered more than most, with half a million slaughtered over the next century.

The king’s daughter, Queen Elizabeth I, was encouraged to strengthen the law, and she included other animals like otters.

Henry also personally killed more than his share. During the 27 years he hunted while king – until he was severely injured falling off his horse – Henry laid waste to wild animals in grounds, parks, and forests across the country.

And let’s not forget that England is still recovering from the king’s vicious, pointless, arbitrary war on animals.

Henry had no idea about climate change – and that’s the only excuse for a man whose orders created death, destruction, and depravity.