Bus vs Tube: Which is Worse for the Environment?

London is home to a world famous array of cultural phenomena: there’s the Tate, the Shard, St Paul’s cathedral, Big Ben, and so much more to discover. Unfortunately, however, the capital is also home to a large, looming blanket of smog that smothers the city’s buildings.

Since a large portion of urban pollution is caused by travel, the Mayor of London, Sadiq Khan, is on a mission to transform London’s transport. So far, he’s made a handful of changes to London’s network in order to reduce carbon emissions, and he plans to kick things up a notch in the near future.

But while buses and Tube trains are excellent alternatives to driving a car or hailing a taxi, which method of public transport is more eco-friendly? Let’s dive in and find out.

Based on The Eco Experts’ research from TfL, London.gov, the BBC, and Climate Action.

How many people are hopping on and off?

According to TfL, the London Underground covers 402km across its 11 lines, and handles ‘up to 5 million’ passenger journeys a day.

While it may be the case that some people ride both in a single day, when these two modes of transport join forces, they keep millions and millions of Londoners out of cars, taxis, and other carbon-emitting private transport. Looking at the raw numbers, we may have to call this one a tie.

Though it might not seem it, noise pollution can be deeply harmful. If you’re fully immersed in the hustle and bustle of city life, noise pollution might be causing you pain. City noise can cause high levels of stress, as well as tinnitus, hearing loss, and lack of sleep.

But which is causing more of a ruckus – buses, or the Tube? Well, according to London.gov, the newest Routemaster buses only have a decibel range of 76 decibels (dB). For context, it’s suggested that exposure to sounds at or above 85 dB can cause hearing loss, so you can rest assured that your ears are safe from these vehicles.

The Tube, on the other hand, isn’t so kind to your ears. Almost all of London’s Underground lines surpass the safe level of noise – indeed, the worst sonic conditions are on the Northern line, where sound levels can reach a staggering 107.7 dB. To put this into context, the average decibel range for a plane is between 120 and 140 dB.

So, if you’ve got your ears’ best interest in mind, stick to the bus.

TfL recently released a report which found that out of all TfL resources, buses are responsible for about 55% of energy bills, whereas the London Underground, along with overground and the DLR, makes up 45%. This would suggest that buses are guzzling more fuel than the Tube, although there isn’t much in it.

However, London buses are currently in the process of going carbon-free. Instead of rolling out new diesel-chugging buses, Sadiq Khan has introduced new fuel alternatives for his fleet of red machines.

When you look at the variety of fuel that’s being used to power buses, it paints quite a reassuring picture. And we can expect to see more of this in the next few years! The mayor is spending more than £300 million to transform London’s bus fleet, and aiming to phase out diesel-powered double-decker buses entirely.

As for the Tube? This traditional transport has a history of eco-friendly fueling. Its first year of electric carriages was introduced way back in 1890!

Today, the underground is run completely off of electric power, all sourced from the national grid. This means that no CO2 emissions are created in the tunnels.

Although this is impressive, the electricity used is not necessarily eco-friendly. Check out how the national grid sources its power:

Although your eyes might be drawn to the hefty ‘gas’ and ‘coal’ segments, there is an ever-growing amount of renewable energy being pumped into the national grid. TfL is also taking measures of its own to ensure a greener approach to travel in the capital.

“We are working to develop the best approach to meeting the ambition to supply our rail services with zero-carbon energy, through energy efficiency, on-site generation, and procurement of renewable energy. We have mapped the potential for solar generation on our rooftops, and assessed high potential land holdings.” – Mayor of London, Health, Safety and Environmental Report

Personal impact: how will bus or Tube pollution affect you?

London buses are not likely to have an impact on your health. Admittedly, there are certain bus routes around London that are dangerously over the pollution limit, which will leave you breathing in toxic air. However, to tackle this toxicity, Sadiq Khan has specifically replaced all diesel buses with electric ones for these routes. Hopefully this sustainable swap will cleanse the air over time.

The air quality throughout the Underground, on the other hand, is quite worrying. If you’re a regular London commuter, you’ll have noticed the thick layer of black dust sitting in the corners and crevices of Tube stations. These black ‘particulates’ are tiny fragments of metal that have broken away from either the tracks as the train brakes.

So, whilst Tube trains aren’t emitting any CO2, these particulates are still extremely damaging to your lungs. In fact, researchers found that pollution in Tube stations is up to 30 times higher than beside busy roads.

Since these findings have emerged, TfL has reassured the public that appropriate measures are being taken. To reduce the amount of metal fragments released in the Underground, brake repairs on the Jubilee and Northern lines are top priority. Air quality is also being improved through regular cleaning practises from TfL.

So if your lungs are giving you grief, keep your distance from the Tube. You win this round, bus.

TfL hasn’t openly stated its carbon footprint for the Underground in its annual report, although it does provide its total grid electricity usage: 1,701 gigawatt hours (GWh). So we’ll have to use our heads to work this one out.

If we assume the worst, and say that this grid electricity came exclusively from fossil fuels, then this 1,701 GWh converts to 167 tonnes of CO2 per year – not a great figure, especially if it’s coming from rather unsavoury sources. That said, producing 167 tonnes of CO2 per year while carrying 5 million people a day is still quite an achievement.

Buses, on the other hand, generate 6% of all London transport CO2 emissions. According to TfL’s annual bus performance report, London buses travelled a whopping 480,423,740 km last year. It’s also been estimated that the average London bus releases 90g of CO2 per km – meaning London buses are emitting roughly 43,238 tonnes of CO2 a year. To put this into perspective, the average person’s total annual carbon emissions is 10 tonnes.

So, the Tube wins this round by a mile!

What does the future hold?

You might be reading this with a heavy heart, but it’s not all doom and gloom. Thanks to the determination of the mayoral office, London is on the path to becoming one of the greenest cities in the world.

Not only is the air pollution problem currently being tackled head-on, but new goals are constantly being put in place. Check out London’s most exciting plans below.

Since February 2003, central London has been home to the Congestion Charge: a daily £11.50 levy for driving within the zone.

London took things to the next level by introducing the Ultra Low Emissions Zone. This came into force on 25 October 2021, and expanded the Congestion Charge zone to an area bordered by the North and South Circular roads. The price was pushed to £12.50.

As of July 2022, the Congestion Charge is £15. There's no double London takes road pollution a lot more seriously these days.

The Tube is also due for a big old spruce up.

As well as replacing worn out brakes, London Underground trains are set to start coasting into stations to prevent harsh braking. This will both save energy and reduce the amount of metal fragments released into the air.

On top of this, TfL has ambitious plans to generate its own power by placing solar panels alongside the overground railway tracks. This push for renewable energy is likely to put the Underground well ahead of all other transport options.

TfL is also planning on using storage batteries at points in the network where energy is being lost. By taking advantage of lost energy, they are making sure nothing goes to waste.

According to Climate Action, all taxis and minicabs in London are set to be non-polluting by 2033. This means that even if people aren’t using public transport, their carbon footprints will still be at a more sustainable level.

We’re guessing you’ve also come across the cabbie’s nemesis, Uber. The controversial ride-sharing platform has also announced its own carbon-busting blueprint, the Clean Air Plan, which aims for every car on the app in London to be fully electric by 2025.

Sadiq Khan has committed to making all buses within the M25 border zero-carbon by 2037.

As a fast-track way of cutting back on air pollution, 12 Low Emission Bus Zones have also been implemented throughout the capital. These zones feature the greenest buses on the capital’s most polluted routes. This strategic approach is expected to reduce NOx (Nitrogen Oxides) emissions by 84%.

TfL is also developing a plan for planting 1,000 new trees on city roads. Although tree planting is something it already does, the organization is aiming to make sure it continues working towards the Mayor’s Transport Strategy target – a 1% year-on-year increase in tree numbers on our roads until 2025.

Using the underground to heat homes

Perhaps the most out-there idea from the Government is using the Tube to heat homes. The Greater London Authority (GLA) estimates there is enough heat wasted in London to meet 38% of the city’s heating demands.

Channelling heat from the Underground already heats about 700 homes in North London. The Government intends to heat a further 450 within the next year. 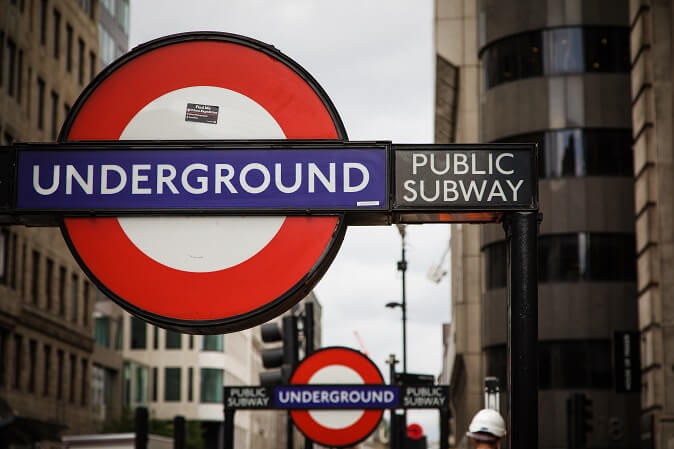 So, what’s the verdict: bus or Tube?

And the winner is…the Tube!

As the oldest metro system across the globe, there’s no denying that the Tube comes with its aging faults. Despite being aggressively loud and having dust-smothered tunnels, the Tube is much better for the environment. The amount of CO2 it produces is miniscule compared to buses – and our maths was assuming that all of the grid electricity is from fossil fuels.

Although buses are on a path to become greener, they have a long way to go to catch up with the Tube. So, if you’re after the most eco-friendly way to get around London, grab an Oyster card, and head for the Underground.