2020 was the year everything stood still. We saw eerily quiet roads, planes parked up on the side of runways, boarded up shops, and silent school halls. And, for a short period of time, this stillness led to a drop in air pollution levels across the globe.

This sparked curiosity in many scientists, leading them to question what was worse: air pollution or COVID-19?

In an interview with The Eco Experts, Dr. Francesca Dominici – Professor of Biostatistics at the Harvard T.H. Chan School of Public Health, and Co-Director of the Data Science Initiative at Harvard University – said: “It is undeniable that climate change and COVID are the two largest social issues in the world.”

So, more than a year on from the first global lockdowns, we’re here to examine which parts of the world suffered the most from both COVID-19 and air pollution. We'll also look at how the two are interlinked, and whether lockdowns actually reduced pollution-related deaths. 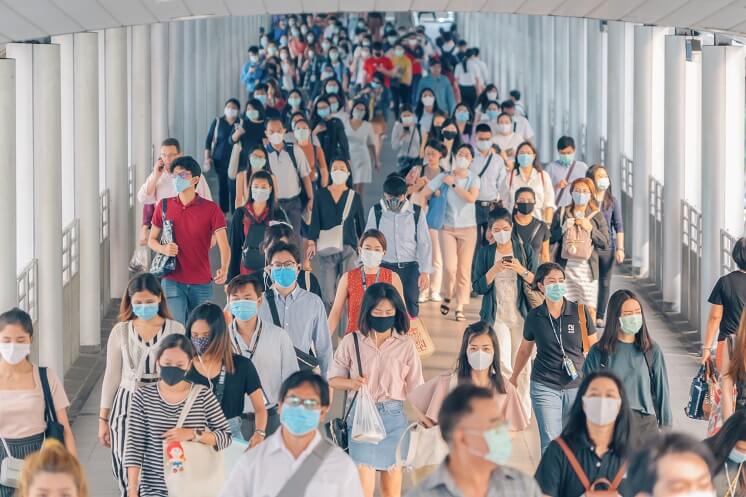 By 31 December 2020, 1.88 million people had died from COVID-19 worldwide. Numbers fluctuate from country to country, with some governments having handed the pandemic far better than others.

The countries with the most COVID-19 deaths by the end of 2020 include:

What about ‘long COVID’?

Of course, we can’t ignore the fact that many people who caught COVID-19 are now burdened with long COVID (also known as post-COVID syndrome) – a condition when the virus’s symptoms last weeks or months after the initial infection.

But will long COVID impact death rates in the future? Unfortunately, there is already an overwhelming amount of data to suggest so.

A recent study which looked at 47,780 discharged COVID-19 patients found that almost a third were readmitted to hospital shortly afterwards – and furthermore, a similar proportion were also diagnosed with a new respiratory disease.

Studies published by The Lancet and BMJ also found that, once discharged, patients were also more likely to suffer from severe organ damage, experience impairment of mental processes (such as problem-solving), and report symptoms of anxiety and depression.

This is supported by another Lancet paper, which found that 75% of discharged COVID patients still had at least one lingering health problem six months later.

Since the pandemic is still playing out, we can’t be certain that long COVID will lead to premature deaths. Research has, however, already identified an increased risk of severe health issues, which could lead to higher mortality rates.

“Urgent research is needed to understand the risk factors for post-COVID syndrome, so that treatment can be targeted better to demographically and clinically at-risk populations.” – Professor Kamlesh Khunti of the University of Leicester

How many people died from air pollution in 2020?

According to the State of Global Air, air pollution was responsible for 6.67 million deaths worldwide in 2020, with the worst health outcomes typically happening in developing countries.

Air pollution led to 3.54 times more deaths in 2020 than COVID-19 did – and yet, there seems to be no urgency to deal with it in some countries.

A recent analysis by The Lancet suggested that air pollution is responsible for 16% of global deaths, making it the primary cause of preventable premature death worldwide.

Which cities suffered the most from air pollution in 2020?

Air pollution affects pretty much everyone – although people with illnesses, the elderly, children, and low-income families are the most at risk.

Currently, nine out of 10 people breathe air that exceeds the WHO’s guideline limits – but which cities are suffering the most?

On the graph below, we’ve listed the most polluted cities in 2020, focusing on the amount of PM2.5 (tiny particulate matter, which is considered the primary cause of death from air pollution) lingering in the air.

Notice a common theme? Unfortunately, cities in India suffer a lot from thick smog all year round. In fact, Indian cities made up 35 of the top 50 most polluted cities in the world during the pandemic.

Below, we’ve outlined what India’s air pollution levels looked like throughout 2020. For context, the WHO’s guidelines suggest PM2.5 levels should be between 0-10 µg/m³ (micrograms per cubic meter of air) – meaning India’s levels currently hover between ‘unhealthy’ and ‘very unhealthy’ levels.

As you can see, India’s most polluted cities all follow the same trend – air pollution levels dip as India entered its first lockdown in late March, but rise again sharply in October. This level of pollution is lethal in itself – but combined with COVID-19, Indians are even more at risk.

With these two graphs side by side, we can see that India’s air pollution levels and COVID-19 death rates don’t align – in fact, they’re almost polar opposites. This paints quite a terrible picture of the battle people in India are fighting: a summer of COVID-19, followed by a winter of toxic air.

In 2019, before the pandemic, health officials urged people in India (specifically Delhi) to stay indoors to avoid the toxic air pollution – residents refrained from doing any physical activity, schools were closed, and local lockdowns were implemented. This isolation is often encouraged during India’s so-called ‘pollution season’, which usually happens in the winter months. This may have contributed to why COVID cases were lower in the winter months.

Despite causing millions of deaths each year, air pollution is rarely seen as the specific cause of death.

In fact, the first formal legal recognition of air pollution contributing to someone’s death only happened in December 2020, after nine-year-old Ella Adoo-Kissi-Debrah had an asthma attack whilst living in a highly polluted area in the UK.

This lack of recognition mainly comes down to the fact that air pollution impacts the body over a long period of time. Toxic air increases the risk of stroke, heart disease, lung cancer, and asthma, and affects nearly every organ in our bodies.

So, unlike many deadly viruses, air pollution’s role in an individual’s death isn’t always crystal clear.

What’s the link between COVID-19 and air pollution?

A recent study found that 15% of global COVID-19 deaths were linked to manmade air pollution – including 27% of deaths in East Asia, 19% in Europe, and 17% in North America.

It’s also been suggested that people living in Indian districts most severely affected by long-term PM2.5 exposure experience an increase in COVID-19 deaths by 5.7%.

As Dr Mark Miller outlines below, this research is leading to a lot of new and unanswered questions.

“We now need a better understanding of the biology underlying these associations. Could these findings simply be because both air pollution and COVID-19 affect the same vulnerable groups – the elderly and those with respiratory or cardiovascular disease – or is there something more going on?” – Dr Mark Miller, BHF Senior Research Scientist, University of Edinburgh

While COVID-19 has led to a lot of deaths around the world, some experts claim its relationship with air pollution has also helped save lives in some areas. For example, it’s been suggested that the initial lockdown in China likely saved thousands of lives by slashing air pollution from factories and vehicles.

Earth Systems Professor Marshall Burke measured PM2.5 levels in four Chinese cities. He found that just two months of pollution reduction has likely saved the lives of 4,000 children under the age of five and 73,000 adults over the age of 70.

Other scientists have also estimated that a 25% drop in city air pollution in China during the lockdown might have prevented between 24,000 and 36,000 early deaths over a single month.

COVID-19 has ripped through the world, tragically killing over a million people on its course. Air pollution, on the other hand, might not be as obvious as COVID-19, but has been causing millions of premature deaths for years. Overall, COVID-19 led to 1.88 million deaths in 2020, whilst air pollution contributed to 6.67 million deaths – and may have also led to more COVID-related deaths.

As Delhi writer and activist Jyoti Pande Lavakare puts it, air pollution is “a pandemic in slow motion”. While the world has managed to gradually reduce the severity of the COVID-19 pandemic, it still has a lot of work to do regarding the air pollution pandemic.