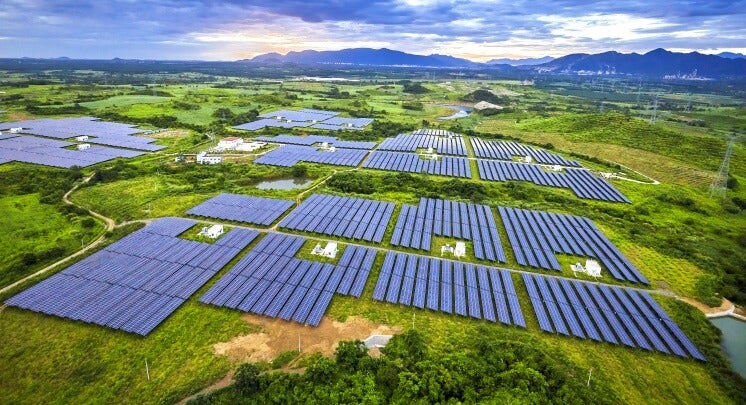 When solar panels were first introduced, their potential to change the way we generate energy was massive. Initially, whilst the technology was still developing, mass adoption of solar panels was slow.

It wasn’t until greater efficiencies were developed that it became viable to start mass building ‘solar farms’.

But what exactly is a solar farm and how does it differ from ordinary solar panels? To help answer these questions and more, we’ve created a complete guide to solar farms with all the information you’ll need to understand them.

What are solar farms?

First off, an introduction to what solar farms actually are. In short, a solar farm is functionally no different from the same solar panels you’ll find on rooftops around the world, only at a much greater scale.

When you collect large amounts of solar panels and place them in optimal locations, the potential for generating electricity increases immensely. This can then be used to power villages and towns, all the way up to entire cities depending on the scale of the solar farm.

Take India’s Bhadla Solar Park for example. It’s the single largest solar farm in the world, capable of producing 2,245 MW (megawatts) or 2.245 GW (gigawatts) of electricity. To put that into perspective, a single gigawatt has the potential to power anywhere between 200,000 to 1,000,000 homes, depending of course on how much energy each home uses. The fact that we've figured out how to generate all this power just from the sun is an extraordinary feat of human ingenuity!

How do solar panels work?

The solar panels used in solar farms are made up of photovoltaic cells, which themselves are made out of silicon wafers manufactured through a process of converting beach sand into high-grade silicon. This is then put into interconnected wafers, which form the photovoltaic cells and give solar panels their ability to absorb sunlight, convert it into electricity, and power our homes.

Naturally, there are other, more complicated elements involved in creating solar panels, but this is the basic gist of it.

Key benefits of a solar farm 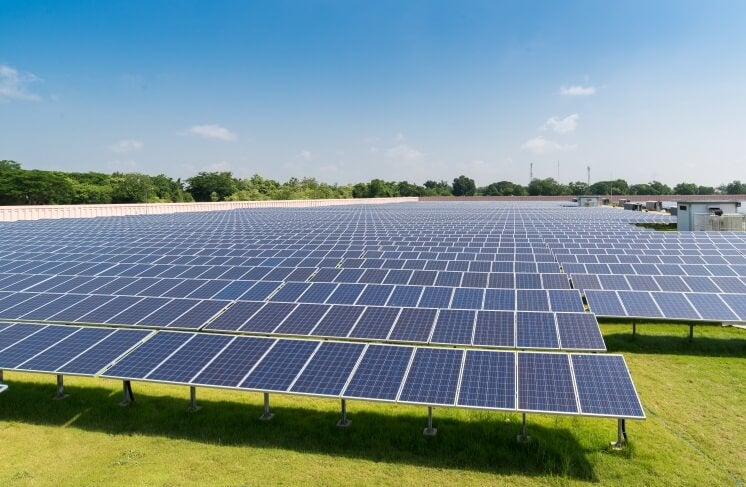 The different uses of solar farms

Because solar farms vary so much in scale, the different ways they can be used also vary significantly. It all depends on what is needed, whether that be a few small-scale installations to power a village, or a large-scale (utility-scale) solar farm designed to generate electricity for an entire town or city. Take a look below for a breakdown of the different uses of solar farms:

On the smaller scale there are community solar farms, which are exactly what they sound like: a way for smaller communities to take advantage of the benefits of solar panels, without the expenditure of purchasing them outright.

Community solar farms are also great for people who might not have the property or space needed for personal installation. They would, however, need to lease nearby land, but typically a community would pool together funding for this or a council would offer a grant.

Solar farms of the larger variety are more often than not funded by governments, as the sheer cost of building them is almost always out of the reach of individuals or communities. What large-scale solar farms usually do is supplement power grids, which helps shift the reliance away from either fossil fuels or nuclear power.

However, that isn’t to say a large-scale solar farm couldn’t be the only source of power – and in fact, as technology improves, this is becoming more common.

It is also a growing trend for some businesses to fund their own solar farms, in a bid to reduce their energy demands. As the need for more carbon-neutral approaches increases, we expect to see more of the world’s big corporations switch to powering their businesses with solar energy.

How much does a solar farm cost?

The cost of a solar farm depends first on the obvious factor: the size of the solar farm. There is more to think about than just size though, such as the average cost per watt, which is determined by things such as sunlight availability, infrastructure access, and how much the lease costs for the land (unless it’s privately owned). You’ll also have to consider the cost of the base materials plus construction.

As for sunlight availability, if a solar farm is in a less-than-optimal location, each watt will take longer to generate and cost more as a result. This is because the longer a watt takes to generate, the more inefficient it is, and the more is paid for the upkeep of the farm (and/or whatever lease payments have to be paid). Maintenance costs and other outlays are not reduced just because a solar farm is in a sub-optimal location.

Solar farms benefit from economies of scale, in the sense that as a solar farm gets larger, the cost per watt becomes more efficient.

On a positive note, solar is definitely shaking off its reputation for eye-watering costs. Since 2010, the cost of solar energy has dropped by more than 80%.

To read more about the costs of solar panels, check our recent guide on solar panel costs.

What is the minimum space needed for a solar farm?

There are no two ways about it, solar farms need space and lots of it. To generate roughly 1 MW of energy, you would need between six and eight acres. This isn’t just for the panels though – you also need to accommodate essential equipment such as inverters and storage batteries. You have to ensure that there is adequate space between the panels for any maintenance needed, too.

Where are solar farms built?

As solar farms need so much space, they are built primarily on rural land. The best spots for solar farms are either flat or south-facing slopes, where the panels can take full advantage of the sun’s peak rays. There are even some examples of solar farms that tilt to face the sun throughout the day, such as the Benban Solar Park in Egypt.

Lately, the idea of combining solar farms with biodiversity initiatives is becoming increasingly popular. This often means allowing the spaces between solar panels to ‘rewild’, which encourages wildflower growth and attracts bees and other insects with a host of benefits. It’s encouraging to see that more resources are being made available to those looking to build a solar farm and improve the surrounding environment.

How long do solar farms take to build?

Size will of course impact build time, but broadly speaking it will only take a matter of months to complete the initial construction of a solar farm. That’s just the beginning though, as the completion of the solar farm to operating capacity can take between one and three years.

Connecting to the grid

Don’t forget that you need a connection to the power grid in order to actually use the electricity generated by your solar farm! In an ideal world, the site you pick will already have a connection, but if it doesn’t, you’ll have to pay to get one set up.

There are two different types of grid connections. For community solar farms, you’ll typically connect to a three-phase distribution line. This is a means of transferring electricity at a lower rate than transmission lines, which are the big overhead cables seen on the power lines that crisscross a country. Three-phase distribution lines can never be more than one mile from your home, not for any legal reason but simply because any further than one mile and their effectiveness starts to drop off rapidly.

Large-scale solar farms will always tap into transmission lines, and subsequently into the main power grid.

Whilst the early steps and setup involved in starting a solar farm can be challenging, it’s clear that the investment is worth it. A well-managed solar farm, even in a less-than-ideal location, will give you enormous benefits as an unlimited source of clean, renewable energy. And as technology continues to improve, we’ll see solar farms go from strength to strength.

For businesses looking for cleaner energy sources, investing in solar farms is a no brainer really. After the initial building costs, solar farms soon start to pay back (tax credits are just one way a solar farm can be profitable). And with green energy production on the rise across the planet, there has never been a better time to invest!