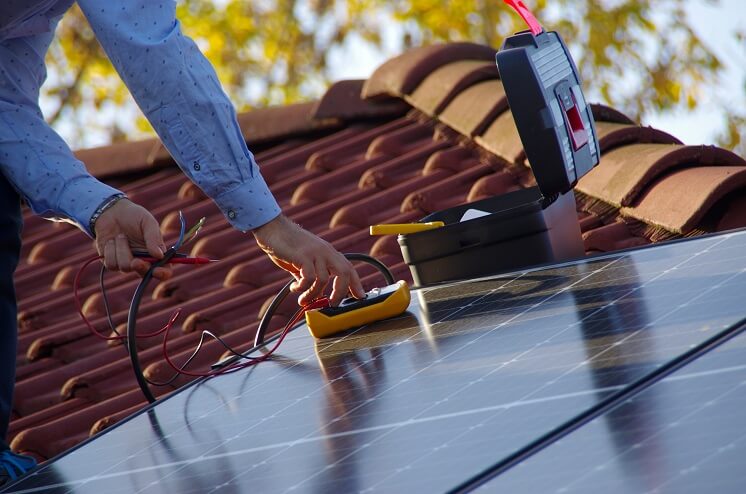 Solar panels have become more popular, more affordable, and more efficient over the years, prompting more people than ever to consider adopting the technology. There is a greater consciousness of the climate issues we face globally too, with many people looking to greenify their energy.

The decision to buy solar panels is not without its potential issues, though. Because of this, we’ve put together a brief guide on seven of the most common solar panel problems, to help you make an informed decision.

In the meantime, you can get accurate quotes for solar panels for your home by entering a few details here, and our qualified installers will get in touch.

Solar panels on a rural house

What's on this page

1. Solar panels can be visually unappealing

No two ways about it, solar panels can have a negative impact on how a building looks, especially if it’s an older property. For many, this is one of the major hurdles to adopting solar power, even despite all the other benefits.

What defines something as visually unappealing is subjective of course, but generally it happens when a solar panel installation takes away from a building’s original design. This is especially true in historical buildings such as a converted church or listed property.

People who own historic buildings are often worried about the impact solar panels would have, on not only the historical qualities of the property, but on the structural integrity of the building as well. This is because hooking up solar panels on buildings without easy access to the necessary wiring can be complicated.

Another thing to consider is that adding solar panels to a building could potentially damage its historic materials. Additionally, if a building is an important visual element of a community, there might be objections from locals.

For those worrying about whether or not solar panels reduce the value of a property, rest assured that this isn’t the case.

2. Impact of nature on solar panels

After solar panels are installed, they inevitably have to face nature and all the things she might potentially throw at them. This includes birds, who have a reputation amongst solar panel owners as a particularly annoying bane. Their tendency to nest under panels can directly impact the panels’ efficiency and ability to reach their energy potential. With birds nesting also comes the obvious mess they leave behind, only furthering the damage done to solar panels.

Birds aren’t the only thing to worry about though. If you live in an area with strong weather patterns you should make doubly sure that any solar panel installation is done properly. If not, you run the risk of seeing your solar investment ripped off in strong winds. Areas with extreme temperature drops also pose risks to solar panels.

Microcracks on solar panels are where tiny fissures appear on or within the cells, which can lead to far larger fractures that affect a panel’s efficiency if left unattended. These fractures can differ in size, with some spanning the length of a cell, and others forming in the corners of the panel itself.

The silicon used in solar panels is very thin, and when put under the pressures of thermal cycling (the heating and cooling of something), the cells expand and shrink. This can put strain on the cells, and though usually these strains wouldn’t cause microcracks, they can still occur. Other factors that cause microcracks include:

Microcracks can create what is known as ‘electrical separation’, resulting in inactive cell parts and subsequently, poorer efficiency for the solar panel. Having microcracks on a panel can also lead to ‘hot spots’, which have the potential to reduce efficiency, damage the entire panel, or even cause a fire.

These are often caused by dodgy installations, either due to an inexperienced homeowner trying the DIY approach, or a qualified installer cutting corners and/or making mistakes. What poor connections can do to solar panels is drastically limit their effectiveness, resulting in wasted energy that doesn’t go into powering a home.

It’s not always down to bad installation though, as sometimes poor connections come from weather corrosion. Solar panels installed properly should not succumb to weather damage for many years to come, but consistently heavy weather conditions can speed up degradation.

Solar panels should be installed by professionals to avoid future issues

First off, a brief explanation of what an inverter is: it converts the direct current (DC) electricity captured by the solar panels into alternating current (AC), which is the current required for electrical circuits (and therefore what powers your home). These crucial parts of a solar panel setup can falter, leaving you without electricity.

In short, a failed inverter leaves you unable to generate usable electricity. Inverters also need to be replaced within the lifespan of your solar panels, as they don’t last as long as the panels themselves. You can find a more detailed breakdown of common problems with inverters here.

6. Debris building up on panels

Solar panels naturally see a buildup of dirt and debris throughout their lifetime, which can impact their efficiency. Where you live has an impact on the amount and type of debris to watch out for. For example, if you’re near a heavily wooded area, then dead leaves in autumn are an obvious problem. For people living in cities, pollution can accumulate on panels, making it harder for the panels to absorb sunlight.

This same principle applies to areas with high dust levels. Though not as prevalent in the UK, properties in countries like Spain can experience a buildup of ultrafine sand blowing in from the Sahara Desert. Also, areas with high levels of moisture (properties near wetlands or a river for example), can suffer from algae and general mould/mildew.

When it comes to creating clean energy, solar panels are king. But as for what happens to panels when they’re no longer efficient enough, that’s a different story.

Recycling solar panels properly is not only a complicated process, but an expensive one too. This is because the techniques needed to separate the important parts, such as the silicon and silver, currently cost more than the worth of the base materials (in America, the process costs between $15-$25 per panel, with recovered materials worth only $1).

It’s the silicon in particular that takes a lot of effort and skill to recycle into a state where it can be used again. Unfortunately, it takes so much effort that there are currently very few organisations around the world capable of doing it. And even then, they’re unable to recycle at one hundred percent efficiency, with only a handful breaching the ninety percent threshold.

What’s more concerning is that solar panels contain damaging pollutants that, when left exposed on a landfill site, wash away with rain into nearby water sources and the surrounding environment. These pollutants include lead, which can have a seriously bad impact on the environment and humans.

With solar panel adoption increasing every year, experts are growing more concerned about the potentially huge backlog of panels needing to be recycled. It’s clear then, that there is some way to go before solar panels are a true net-zero solution to our energy problems.

Despite some obvious problems, solar panels still represent one of the best steps towards a greener planet. Once the thorny issue of recycling panels is solved (and that solution is well on its way), solar panels will help millions of people around the world generate clean electricity. The UK alone is already seeing a surge in power generated by solar panels, as is Europe as a whole. Here’s to a greater solar-powered future for all!

If you’d like to receive free solar panel quotes, fill in this short form and start comparing prices today.