Get a Tailored Security System Quote

Do you own your home?

Home security from the experts

✔ A burglary takes place every 106 seconds in the UK

✔ £181 million is stolen from homes in London every year

✔ Fill in the form above for free home security system quotes

Home burglaries are terrifying, traumatising, and often costly crimes – and one happens in the UK every 106 seconds.

The Office for National Statistics puts the average cost of a residential burglary in the UK at £3,030, and more than one-third of that is the emotional cost to victims – which makes sense, when you consider that someone is home during 58% of burglaries.

You can help stop this from happening – but first, you need to be informed. This page promised home security and burglary statistics about the UK, and we intend to keep our promise. Here’s everything you need to know.

If you'd like to receive free quotes for a home security system, just answer some quick questions and local professionals will be in touch.

The individual cost of burglary in counties

You can get a monitored home security system for around £30 per year with trusted brands like ADT – which seems like a sensible move when you look at this map.

Considering that the average person in places as varied as Northumberland, West Midlands, and Somerset pay around £30 every year in burglary costs, it’s worth getting some protection.

We calculated these costs by multiplying the number of burglaries in each county with the average cost of a burglary. This includes both the physical loss of goods (£1400) and the average productivity and emotional cost (£1630). We then divided the result by each county’s population.

The average cost of a burglary was put together by the Home Office. It takes into account the cost of stolen items, as well as the emotional cost. This is calculated by analysing how much victims’ quality of life is affected by attacks which happen in burglaries.

The Home Office added this to the productivity cost, which can be calculated by identifying time taken off work as a result of the crime, and reduced productivity when you go back to work, due to the psychological and physical harm done.

Cost of residential burglary in counties

That's right, London loses nearly three times as much money to residential burglaries as any other county in the UK.

You may not have expected the West Midlands or West Yorkshire to rank so highly, but the conclusion from this table is clear: densely populated areas are more at risk.

Risk of residential burglary in counties

Once again, the big counties are the riskiest places to live when it comes to your home being targeted by burglars.

The way London falls to sixth in this chart – from first in the one above – shows how thieves in the capital are able to get away with more expensive hauls.

But you're more likely to suffer a home burglary in West Yorkshire, and sometimes the cost of such invasions is higher than anyone could measure in monetary terms.

The worst 5 affected counties per 1000 people for residential burglary

We calculated these costs by multiplying the number of burglaries in each county with the average cost of a burglary. This includes both the physical loss of goods (£1400) and the average productivity and emotional cost (£1630). We then divided the result by each county’s population.

£9.3 million, lost to burglars every year, in Barnet alone. And another £7.8 million stolen in Enfield.

There's not much you can do to solve the deep-rooted problems in society which lead burglars to break into homes. But you can protect yourself.

Us too. It's evidence that no-one is safe, and that richer neighbourhoods are often targeted because of the obvious wealth contained within.

On the other side of the coin, residents in poorer boroughs like Hackney and Haringey also suffer greatly from burglaries.

How much do burglaries cost each individual in London boroughs?

The fact that suburban Enfield topped this list surprised us – but not as much as the presence of Hammersmith and Fulham in the top two.

That's what happens when you have expensive items to protect, though. You need more protection, otherwise you'll become just another upsetting statistic.

Consider our top-ranked home security system, Verisure. A move towards a safer future seems worth it.

The average cost of a burglary

£1,400 is a lot to lose in one go, and may plunge you into financial difficulties – but the emotional trauma and resultant loss in productivity hits harder.

£3,030 is a horribly large amount to have taken from you – especially when there's a solution in the shape of a home security system.

How many residential burglaries are there per year?

This was a slight decrease from the 12 months ending in March 2018, which saw 309,805 residential burglaries.

What percentage of crimes are burglaries?

That means that for every 18 crimes that aren't fraud, one of them is a burglary.

How many burglaries are there per 1,000 people?

There are five burglaries per 1,000 people.

If you have 200 Facebook friends, that means one of them – on average – has been burgled.

What percentage of households experience a burglary per year?

2.35%, which translates to each home having a one in 43 chance of being burgled.

When the chances of a catastrophic event befalling you are this high every year, it might be a good idea to protect yourself with a home security system.

How many houses are broken into every day?

That's right – thousands of people have to cope with their most sacred space being violated every day.

How often does a burglary occur?

In the time you’ve spent reading this page, there have been five burglaries.

How effective is a home security system?

63% of burglaries happened to people without a basic security system.

On the flip side, 77% of people with at least a basic home security system are not burgled.

What percentage of homes have a security system?

32% of British householders have a burglar alarm, and 40% have a security camera.

It’s pretty much impossible to know what percentage of home security system owners are satisfied with their choice of product – but it’s clear that having a camera and alarm helps to protect you against burglaries.

A 2012 University of North Carolina at Charlotte survey of burglars found that 60% of the thieves wouldn’t burgle a property if it had an alarm, and 12 burglars who were surveyed by the Co-op in 2017 said a camera was their biggest deterrent.

If you’d like to compare quotes for a home security system which can help you feel safer, fill in this form and see how much you can save.

What percentage of burglars know their victim?

43%. People can be targeted by anyone from a close relative to a handyman or acquaintance in their neighbourhood.

Keep your home secure, and you’ll never have to find out who would target you. 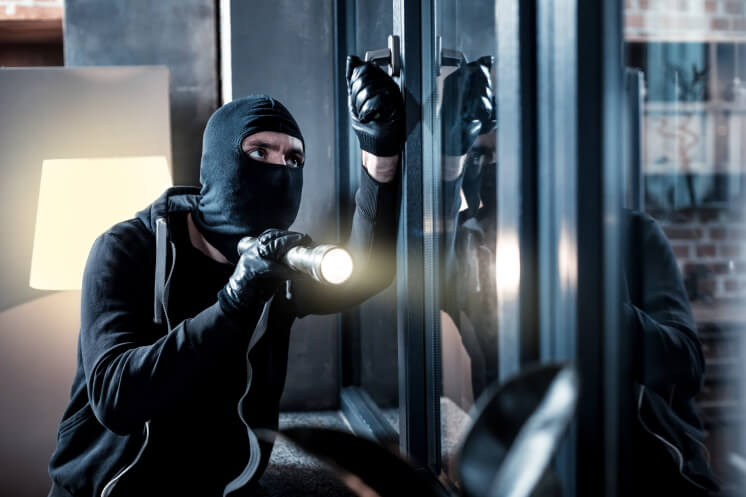 What percentage of burglaries have violence?

Burglars use force or violence against 26% of victims.

So in one in every four cases, an intruder could leave you and your loved ones with both physical and psychological scars – or worse.

63% of residential burglaries happen to people without a basic home security system.

What time do burglaries occur? What are the most common hours for a burglary?

Overall, 61% of burglaries take place between 6pm and 6am.

The most common hours are 6pm to midnight, when 30% of all residential burglaries happen.

What are the most commonly stolen items?

Burglars will typically aim to take as many small, expensive items as possible from a home, taking as much as they can in the space of just a handful of minutes.

This explains why cash, jewellery, and cards attract their attention, along with laptops, which like cards can be used to sell your identity to someone else.

What are the most common entry points to the home?

67% of burglars break in through a door. In fact, 21% of all burglars who manage to get in do so by simply opening an unlocked door.

29% go through a window – and more than a third of these thieves took advantage of an unlocked one.

How long does a burglary take?

Most take less than 10 minutes.

Burglars typically try to get in and out as quickly as possible.

What percentage of burglaries are solved?

Metropolitan Police data shows that the percentage of burglaries which led to a conviction in the year up to April 2019 was 3.1%.

Data suggests that at least 95% of burglaries across the UK go unsolved.

How often is someone home during a burglary?

And if someone is home, violence is threatened or used against them in 40% of cases.

Which age groups experience the highest rate of burglary?

You might not have seen this coming, but young people are the most vulnerable to break-ins – by far.

It's horrible, but home security should start young, otherwise you could face traumatic consequences.

By now, you’ll know exactly how likely it is that you’ll wake up to find someone stealing from you, how much it could cost you, and how rarely criminals are brought to justice.

You’ve learned all you can; you’ve prepared yourself for this catastrophic event – and if you fill in this form for some free home security system quotes, you could even stop it from happening.

After all, 63% of residential burglaries happen to people without a basic home security system.

You’ve worked too hard, for too long, to build a life for yourself, to have any part of it stolen away by a thief in the night. A small investment in home security can help you to sleep more soundly and prevent traumatic break-ins.