Get a Tailored Security System Quote

Do you own your home?

Home security from the experts

Home Home Security The Best Window and Door Alarms of 2022

✔ 22% of successful residential burglars use a window to enter

The humble window or door alarm is an integral part of your home security setup. Just place the two parts of the sensor either side of an entry point, and it’ll send you an alert when someone opens it.

98% of successful home burglars begin by entering through a window or door – and these sensors can help protect you against them.

So what kind should you buy? Well, you have three options:

We’ve judged these categories on each device’s specifications, cost-effectiveness, and reliability, and the Samsung SmartThings Multi-Purpose Sensor came out on top.

But assuming you need the best window alarms out there, and your wallet can stretch that far, get smart sensors. They’re much easier and better than standalone sensors at enabling you to protect your home.

If you can’t wait to receive free home security quotes from trusted specialists, you can fill in this form and get a headstart on helping to protect your possessions. 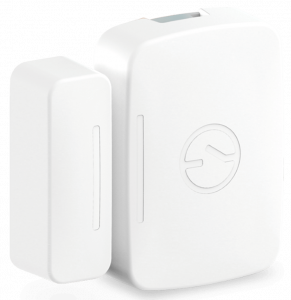 These are all excellent, high quality products which are easy to install and will help to keep you safe – but some of the packages are more expensive than they should be.

If you already have a hub or control panel belonging to any of these six tech giants, you should buy that company’s window alarm. Otherwise, Samsung provides the best value for money on the market right now.

As well as providing a hub and an extra window alarm for under £100, the sensors themselves go above and beyond when it comes to alerting you to exits and entrances.

They can also sense – and react to – temperature changes, and will let you know when there’s an unusual vibration in your home, whether it’s a knock at the door or your washing machine finishing its cycle.

As mentioned above, the sensors which go on your windows and doors to protect you against burglars are exactly the same.

That means the best window alarms are also the best door alarms.

So if you want the most cost-effective option, we’d still suggest buying a Samsung SmartThings Multi-Purpose Sensor.

However, if you’d rather build a monitored package, we recommend SimpliSafe – and we explain why below.

The best window alarms in a monitoring package

SimpliSafe is far and away your best bet. Its window or door alarms are simple for you to install, and easy to use – just connect them to your phone through the SimpliSafe app, and you’re good to go.

You can also add a glass break sensor to your SimpliSafe package, which tells you if someone shatters your window (or a pane on your door) instead of opening it.

Verisure is also a premium offering, with four window sensors, two photographic motion detectors, and fake fog (which the company promises can flush out any intruders in 45 seconds).

It's well worth taking a look at companies like Verisure, SimpliSafe, and ADT, which offer constant monitoring along with their top quality window alarms. But you’ll need to commit whole-heartedly to your system.

This means more than just buying a hub along with your window alarm, as you would if you bought smart sensors.

You’ll need to commit to buying an entire system from one of these companies, which will generally cost at least £650 over the first year – though each home receives a slightly different, customisable quote.

As you can see above, SimpliSafe’s package is extremely attractive. It doesn’t come with fake fog, but it does include the excellent SimpliCam camera, and costs just £12.99 per month.

But there’s no way to soften the blow about that last option: ADT’s offering is far too expensive.

And though it’s a long-established company you can trust, its 4.1 score on customer review site Trustpilot is still lower than Verisure and SimpliSafe, which both have 4.7 ratings.

43% of burglary victims know their burglar.

So if you’re ready to sign a long-term contract which involves a team of professionals monitoring your home 24/7 – thus removing that weight from your shoulders – then go ahead and take the leap.

But not everyone wants to lay down this much cash for the sake of their safety. We get it. If a monitored system is too rich for your taste, or if you feel confident in your current home security system setup, let’s move on to your other options.

And if you’d like to get custom quotes instead, you can fill in this form to receive top-quality home security quotes.

These aren’t smart devices. They can’t be controlled with an app on your phone, they won’t send an alert if they detect an intruder, and they can’t be incorporated into a connected network.

However, they are cheap, and you don’t need a hub or any wires to operate them. At their best, they’re an effective countermeasure against burglars – after all, most intruders won’t want to stick around when confronted with an ear-splitting alarm.

That’s as loud as a pneumatic drill, or a military jet taking off when you’re standing 15 metres away. The resultant discomfort will force intruders to leave, or else face hearing loss.

SABRE’s window alarm – which you can get for £9.95, or £16 for two – is barely any quieter, with its 120dB siren still operating at the same level as a thunderclap or chain saw.

This slightly more expensive model also comes with three settings: ‘off', ‘alarm', and ‘chime'. You can use the ‘chime’ function to alert you to non-emergencies – like your child leaving their room after bedtime, for instance.

We can’t all be experts, especially on topics like window alarms.

For one, you’d end up boring a lot of people. Dinner parties and trips to the pub would become a minefield for your friends, as they desperately tried to stop you from talking about the relative benefits of Samsung and Yale for the millionth time.

So instead of heading down that path – which inevitably leads to social exile and loneliness – you can read all the answers to your most pressing questions below.

Do I need sensors on every window?

You should certainly get a sensor for all your ground-floor windows, as they’re the most vulnerable. A 2018 Churchill study showed 65% of flat burglaries happen to ground-floor properties.

But if some of these windows are in the same room, you can buy a motion detector instead. This would cover the entire space, not just individual windows.

We would also recommend motion detectors for upstairs windows, unless you think they’re particularly at-risk for any reason, in which case you should get window alarms for them as well.

How does a window alarm sensor work?

Window alarms use something called a reed switch. These devices were created at Bell Labs in 1936, sixty years after the establishment’s founding father patented the telephone.

This piece of technology – which is also what tells your laptop to go on standby when you shut the lid – involves two electrical connectors being placed slightly apart from each other. In the case of window alarms, this distance is two inches at most.

A magnet keeps the pair pulled closely together, and makes sure the circuit is closed.

So there’s a reed switch, and the magnet which keeps the circuit closed – until the two connectors are pulled apart.

This can lead to a comforting chime, a silent but informative text, or a full-blown siren, depending on your preferences.

Where is the best place to put a motion sensor?

When you’re placing them on your windows, one part of the motion sensor should go on the frame, and the other on the glass.

This will allow the alarm to activate when the connection is broken between the two by someone opening your window – or indeed, by smashing it.

What are the different types of window alarm sensors?

There are three types of window alarm.

The first kind involves you buying a hub. This is now the most common variation, and has attracted big tech companies like Samsung, Google, and Amazon to the window alarm market.

The second option is more expensive, as it requires a fully fledged system to be built around your new window alarms.

This custom–made system should fit your home’s requirements like a hand in a silk glove, and will mean your place is constantly monitored – removing the responsibility and stress from your shoulders, and allowing you to concentrate on more enjoyable activities.

The third type is the cheapest and simplest option: you simply buy some standalone sensors and construct a DIY security system around them, buying what you need, when you need it.

If you consider yourself something of an expert in home security, then this option is for you.

Window and door alarms aren’t the most glamorous part of your home security system – that award either goes to your camera or your dog, depending on your taste – but they are important nonetheless.

You want to know if someone breaks into your safe, sacred sanctum, and window and door alarms can do that – but you have to make the right choice for your wallet as much as your peace of mind.

If you feel ready to take that step – and you absolutely are, after reading this article – then you can fill in this form for free quotes from experts in the field.