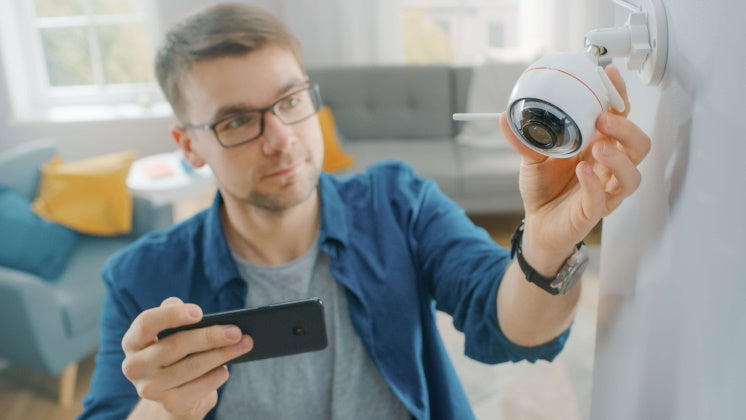 ✔ There’s a home burglary every 54 seconds

✔ Cameras are the best deterrent against residential burglars

Home burglaries are traumatic, expensive events that can devastate a household.

You can protect against them if you take some simple steps that may well include purchasing a security system – even if it’s just a camera.

But before you decide the type and extent of your home security system, let us give you a primer on the topic, so you’ll be fully prepared to make the best choice for you.

Whatever your budget, you can make sure your home is better protected.

You can make yourself safer for free, simply by making sure you’re not making any of the most common mistakes.

And the best security cameras around, from companies like Amazon and TP-Link, are available for less than £100.

2. You can get a guardian angel to watch over your home

There are still more options that can bring you an elevated feeling of security, without leaving you penniless.

Packages from the likes of SimpliSafe and Verisure include monitoring, meaning that professionals will watch over your household 24/7. They currently start at £175.

A domestic burglary leads to victims losing £1,400 in terms of physical goods, on average, according to a Home Office report.

But there’s more to a burglary than the items they take.

When you combine the average hit to people’s productivity and the emotional cost, you end up adding £1,630 onto that figure, ending up with an overall cost of £3,030.

4. There are over half a million burglaries per year

Between April 2019 and March 2020, there were 582,000 domestic burglaries in England and Wales, according to the Office for National Statistics (ONS).

That works out to one burglary every 54 seconds, on average.

There are 21,929,000 households in England and Wales – which means you have a one in 38 chance of being one of the homes to be targeted by a burglar.

5. Most of the time, burglars manage to get in

352,000 burglaries saw the intruder succeed in gaining entry to the household last year.

That means if a burglar tries to get into your home, there’s a 60.5% chance they’ll succeed.

Sometimes, stereotypes are true – and burglars really do prefer to operate under a cover of darkness.

62% of burglaries take place between 6pm and 6am.

The most popular six-hour period for burglars is 6pm to midnight, when 32% of all residential burglaries happen.

Since the ONS started recording home burglary data in 2009, two truths have stayed constant: most burglars are male (84% at the last count), and most act alone (70% at the time of writing).

Over the years, the percentage of burglaries committed by 16 to 24-year-olds has decreased from 48% to 23%. In contrast, the proportion of burglars in the next age group has risen rapidly. 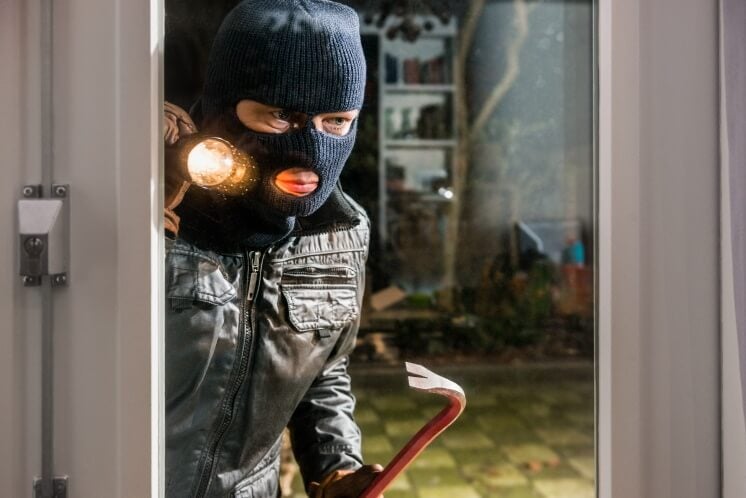 8. Young people are most at risk

The most likely age group to suffer from a home burglary, by far, is 16 to 24-year-olds, according to the ONS.

Nearly one in 20 people in this age bracket are victims of burglary every year.

This figure tumbles to just one in 40 when you hit 25.

During 64% of burglaries, someone is home.

This fact alone won’t stop most burglars, as long as they think they can get in and out before they alert anyone to their presence.

10. There’s a genuine possibility of violence

When burglars succeed in getting into a home, they threaten the inhabitants with force or violence 53% of the time.

In 38% of these cases, they follow through on these threats.

In 43% of domestic burglaries, the criminal is known by their target.

If you protect your home well enough, and deter all criminals, then you’ll never have to find out who in your life would burgle you if given the chance.

Just 3.15% of residential burglaries are solved, according to the Metropolitan Police.

That means that out of these 352,000 incidents where a criminal gains entry to a home, 11,088 result in the arrest of those responsible.

You should take all the precautions you can to ensure you’re never burgled – because the likelihood of receiving justice or recovering your prized possessions is extremely small.

13. Get a short front and back – but keep your sides high and spiky

One quick step you can take to protect yourself is to make the borders of your property as unattractive to burglars as possible.

The Metropolitan Police advises residents to make sure their front hedges and walls are less than a metre high, “so burglars have nowhere to hide.”

But this doesn’t apply to the sides. Whether you have hedges, fences, or walls flanking your home, you should keep them at least 1.8 metres tall.

And if you can crown them with trellises and/or spiky plants – even better. Holly and climbing roses are perfect, but if those aren’t to your taste, the Met Police has a list of recommended plants.

14. Make sure your doors protect your home

One of the top three deterrents for burglars is strong, heavy doors, according to a Co-op survey of ex-thieves.

This makes sense, since 76% of burglars who gain entry to a household use a door, according to the ONS.

They generally do this by forcing the lock, or by removing a panel from the door – so it’s a good idea to get a solid, reliable door.

15. Way too many people don’t lock up

You simply have to secure your entrances.

24% of burglaries start with a criminal walking through a door that was simply left unlocked.

8% begin with a burglar using an open window.

That’s around a third of all successful home burglaries that could be prevented if homeowners just locked their doors and windows.

40% of the time, when a burglar makes it into a home, they take at least one of the following: a purse, a wallet, money, or cards.

In 32% of cases, they take jewellery and/or watches – possibly in addition to the above items.

The lesson: burglars take small, pricey objects they can easily carry and hide on their person.

To protect your valuables, keep them out of sight at the very least, and in a locked safe if possible.

And of course, a home security system helps to keep burglars out in the first place.

17. Burglars know the signs that you’re away

If you’re going away at any point in the future, make sure you don’t publicise the fact to any burglars looking for an easy win.

First, cancel regular deliveries – from newspapers to subscription boxes – and use Royal Mail Keepsafe to ensure your mail doesn’t pile up outside your home.

If you can get a neighbour to park on your driveway, that should also help.

For those of you with smart bulbs, consider setting schedules for them so they switch on during the night. It’ll add to the impression that someone’s in, which will make a burglar think twice.

And please, if you post on Facebook that you’re going on holiday, make your post private. It’s far too easy for a burglar to see who’s publicly checked into an airport with their whole family, and find their home.

18. Cameras can stop criminals in their tracks

A CCTV camera is the biggest deterrent to thieves, according to 12 burglars surveyed by the Co-op.

Considering the relatively affordable price of security cameras these days, this is a quick, cost-effective way to get criminals to leave your home alone.

19. A dog is a household’s best deterrent

Aside from CCTV cameras, former burglars said they were most easily dissuaded from targeting a home if there was a big, loud dog on the property.

Speaking to media company KTVB, one convicted burglar said: “Dogs are a deal breaker for me.

“Big breeds, home protectors are the best to keep people out.”

89% of burglars told the Co-op they would avoid targeting a property if they saw that it was a smart home.

More than three times as many burglaries are spur-of-the-moment decisions, rather than deliberately planned crimes, so a complicating factor like smart technology can be enough to dissuade a thief from targeting your home.

21. Burglars are resourceful, so don’t give them resources

The last thing you want to do is to make a burglar’s job easier for them.

A survey of 422 burglars by Professor Joseph B. Kuhns of the University of North Carolina at Charlotte found that screwdrivers, crowbars, and hammers are the most common tools that burglars carry.

Don’t leave these tools outside your home, and certainly don’t leave a ladder lying around.

As the Met Police points out, you should make sure your shed or garage is secure too, as burglars will take advantage of any weakness.

They’ll either steal the bikes, mowers (genuinely), or power tools contained within, or use the tools they find to break into the main part of your home.