A team of psychologists in Kent have found that using road signs can decrease the number of drivers leaving engines idling, reducing emissions in the local area.

As part of research exploring the impact of messaging – carried out by the University of Kent – the study used three signs at different level crossings in Canterbury.

The results proved that with the right wording, drivers were persuaded to turn their engines off, which reduced the concentration of air pollution.

This research is the first of its kind to show that behavioural change, triggered by persuasive messages, can lead to changes in air quality and pollutant concentration levels. 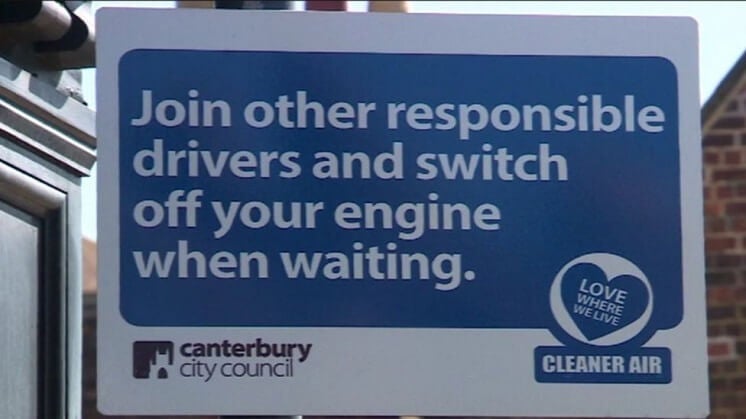 The team of psychologists observed 6,049 drivers idling at the St Dunstan’s and St Stephen’s level crossings in Canterbury, Kent.

The results showed that, overall, only 27.2% of drivers actually switched off their engines, but proved that some signs worked more effectively than others.

Each sign was worded differently but with the same message behind it – urging drivers to switch off their engines. The three signs were:

Both the first and the second messages increased the proportion of drivers who turned off their engines, by 42% and 25%, respectively. The last sign, however, was not so successful.

Even though the percentage of drivers who conformed to the signs was relatively low, the reduction in vehicle idling significantly lowered concentrations of atmospheric particulate matter.

It’s thought that the social proof road signage (the first example) was more effective in the presence of larger numbers of other drivers – suggesting that some drivers may feel a stronger urge to conform when those ahead of them in traffic do too.

Should this be rolled out to more places?

This leads us to question whether these signs should be introduced to other highly polluted areas across the country?

To put this into context, the busiest city in the UK is London – by a long way, with each commuter spending an average of 149 hours stuck in traffic.

One vehicle idling for five minutes produces 271.4 grams of CO2. If this is applied to the 149 hours the average Londoner spends stuck in traffic, that amounts to 485.26 kg of CO2 on idling alone each year. Or, in other words, almost enough to drive the length of the UK twice.

These emissions are totally avoidable. But, now that we’ve seen the success a simple sign can have on engine idling emissions, perhaps we can expect to see more of them dotted around the country to remind us to switch our engines off.