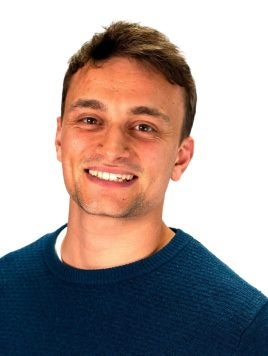 Recycling in England. It can sometimes feel like you're going round in circles.

Nobody’s quite sure what goes in the bin and what stays out, and everyone in your family has a different opinion. Do you need to rinse everything before you chuck it? Do the lids stay off or on? Can you recycle dead animals?

To make things even less certain, the rules vary up and down the country, with no two counties sharing the same set of rules. Think you’ve got your head around things in West Yorkshire? Move to Devon and you’ll be back to square one.

We investigated every English county’s recycling policy to find out who’s doing the most (or at least trying to), and who’s doing the least. Keep reading for the full results, and a colourful map to boot.

Given London has its very own confusing mess of internal recycling rules, we also created a separate study for the capital city and all of its individual boroughs. You can find our London study near the bottom of this page.

Why have we done this study?

“Who cares about each county’s recycling policy?”, we hear some of you ask.

It might not seem fascinating on the surface, but we at The Eco Experts go crazy for any regional ranking competition, and there’s no hotter topic than the national effort to combat the climate crisis.

This is an opportunity to recognise and reprimand in equal measure. We want to call out the local governments who aren’t trying hard enough, while praising the county councils of England who are doing a ruddy good job.

Of course, “good intentions” aren’t the only influence on a county’s recycling policy – local budget is also a major factor. High-tech recycling scanners and processors are not cheap, and nor are kerbside bin collections free to operate.

This is why we’ve considered each council’s gross expenditure per head at the same time.

How did we conduct this study?

Through a combination of hard graft, passion, and every county council’s official website.

We put together 12 questions as a way of assessing each county’s recycling policy. They were as follows:

Does the county provide the kerbside collection and recycling of…

To find this information, we visited each county’s official website and pillaged their PDFs for the answers. Unsurprisingly, some counties did a much better job than others at explaining their recycling policy (well done Worcestershire).

Every county received a score out of 12, with half marks for a partial service (e.g. only St Helens in Merseyside includes aluminium foil in its kerbside recycling collections), or a service that requires paid subscription (e.g. garden waste collection in the West Midlands).

As this is a recycling index, if a county chooses to incinerate a material at a energy-from-waste plant (as opposed to actually recycling it), then they received a ‘0’ in that category. The Greens have denounced energy-from-waste incineration as “bad for climate change”, and suggest that it has held back recycling rates.

Then we really got crunchy with the numbers. To give each county a fairer recycling score, we had to factor in their budget.

By combining 2018 county-by-county population figures with each county’s gross expenditure for 2019/20 (or 2018/19 if not available – all sources below), we calculated the gross expenditure per head for every English county.

The finishing touch? A quick bit of division. For each county, we divided its initial score (1-12) by its budget per head to create an adjusted recycling policy score.

These scores range from 2 to 13, which doesn’t mean an awful lot, so we assigned a school-style grading system:

Which county recycles the best?

We’re not saying Leicestershire actually processes the most waste for recycling. That’s not what we’re doing here. But we are saying that Leicestershire has the most all-encompassing recycling policy in England when you take budget into consideration.

It racked up a decent 10 points out of 12 in the first round, missing out on full marks through a lack of food waste collection and black plastic recycling. With an extremely modest gross expenditure per head of just £768, this gave Leicestershire an adjusted score of 13.01 – the highest mark in the class.

Following in a reasonably close second and third are Gloucestershire (10.13) and East Sussex (10.09).

Which county recycles the worst?

It’s Northumberland. Regularly the scene of Anglo-Scot battles in days of yore, this northeastern county really hasn’t put a lot of effort into its days-of-now recycling policy.

It bagged a meagre 6 points out of 12 in the first round, sharing Leicestershire’s lack of food waste collections, but also not recycling drink cartons or aluminium foil (amongst other items). Combine this with their particularly prodigal £2,955 gross expenditure per head, and Northumberland receives a score of just 2.03.

Financially, Northumberland is not one of the strongest counties, so it makes sense that most of its expenditure goes on more ‘socially pressing’ areas than recycling. Indeed, in the 2019 report on English indices of deprivation, the ONS showed Northumberland to be one of the more economically deprived regions of England.

Merseyside narrowly avoided the bottom of the pile (2.78), with Tyne and Wear placing third to last (3.31).

So here’s the whole picture – an eye-popping cartographic representation of England’s “green and pleasant land” based on adjusted recycling policy scores. Or in other words, a map. Hover over each county to see its grade.

If you’re wondering about how London fared, you’ll see it placed firmly in the middle of the class, earning a D grade. We go into the nitty gritty of each London borough a bit further down the page. 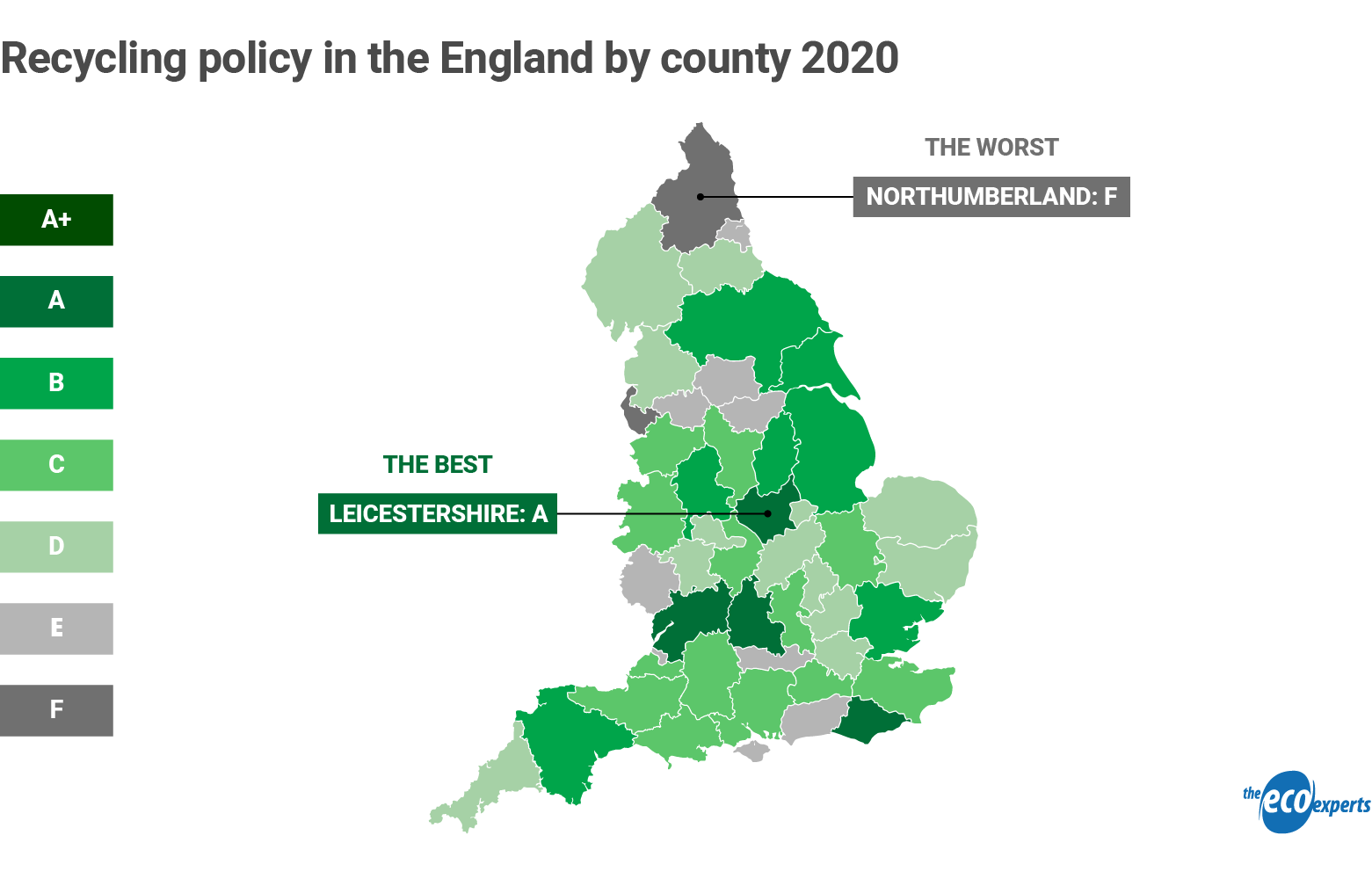 Why is there such a difference between counties?

It’s certainly not the case that every county has exactly the same recycling capabilities, and some are simply choosing to be less green than others.

Rather, recycling plants cost money (as much as £65m), and they can significantly vary in size, quality, and technology. Counties are simply choosing to spend different amounts of money on recycling.

So what are the main factors influencing a county’s recycling spend?

Other than Buckinghamshire and Cambridgeshire, all counties in the UK are unable to recycle thin black plastic (i.e. the stuff you find in microwave meal packaging). This is because most optical scanners (which use light reflection) are unable to distinguish black plastic from the black conveyor belt underneath, and so it gets rejected.

PTTs (e.g. yoghurt pots, margarine tubs) comprise several different types of polymer (PS, PVC, PP, LDPE etc.), which can make them very difficult to separate and process in a recycling plant. Only counties that have invested significantly in the right equipment are capable of dealing with PTTs, which is why almost 20% of English counties either partially recycle or don’t recycle them at all.

The most common type of carton used for juice and milk is the Tetra-pak, which typically consists of six different layers of material (including plastic, cardboard and aluminium). Similar to PTTs, the hybrid nature of Tetra-paks makes them difficult to process – while the cardboard is fairly easy to salvage, the aluminium-plastic compound (PolyAl) often has to be incinerated.

Once again, the equipment that can properly recycle Tetra-paks is expensive, and not every county has it. Currently, nearly a third of English counties either partially recycle or don’t recycle them at all.

We followed exactly the same methodology for our London study.

Looking at each London borough, we asked the same 12 questions of their official recycling policies, and then applied each borough’s budget per head to produce a numerical score and a grade.

As you’ll notice, the range of scores for the London boroughs is much closer than it is for the counties, lying between 0.88 and 5.10. This shows that recycling performance across the capital city is more consistent than it is across England as a whole, which is understandable.

So, our grading system for London boroughs was as follows:

Which London borough recycles the best?

It’s Bexley! Located right at the edge of Greater London, this southeastern borough does not mess around when it comes to being green.

Bexley racked up an impressive 10 points out of 12 on its recycling policy, skimping only on plastic carrier bags and cling film. Combined with a very low budget per head of £1,962 (the second lowest in London, after Bromley), Bexley received a score of 5.10, and a big, shiny A+.

Which London borough recycles the worst?

It’s Barking and Dagenham! Just north of Bexley on the opposite side of the Thames, this bona fide East End borough isn’t doing quite so well in terms of recycling policy.

Unfortunately, Barking and Dagenham’s recycling policy scored just 4/12, with its kerbside collections limited to plastic bottles, food/drink cans, and drink cartons, along with only partial collections for garden waste and plastic tubs/pots.

Combined with a hefty budget per head of £4,529 (the largest of all London boroughs), Barking and Dagenham’s overall score is 0.88, earning it an F.

This situation isn’t particularly surprising. Barking and Dagenham has been earmarked for extensive urban generation for many years (which explains its generous government budget), and you can see why a borough with pockets of economic deprivation sees recycling as such a low priority.

Here’s the full picture. Another green map, along with the top ten and bottom ten boroughs. As you might have noticed, we’ve excluded the Borough of the City of London from this study, as its exceptionally small population and exceptionally large budget per head make it a significant outlier. 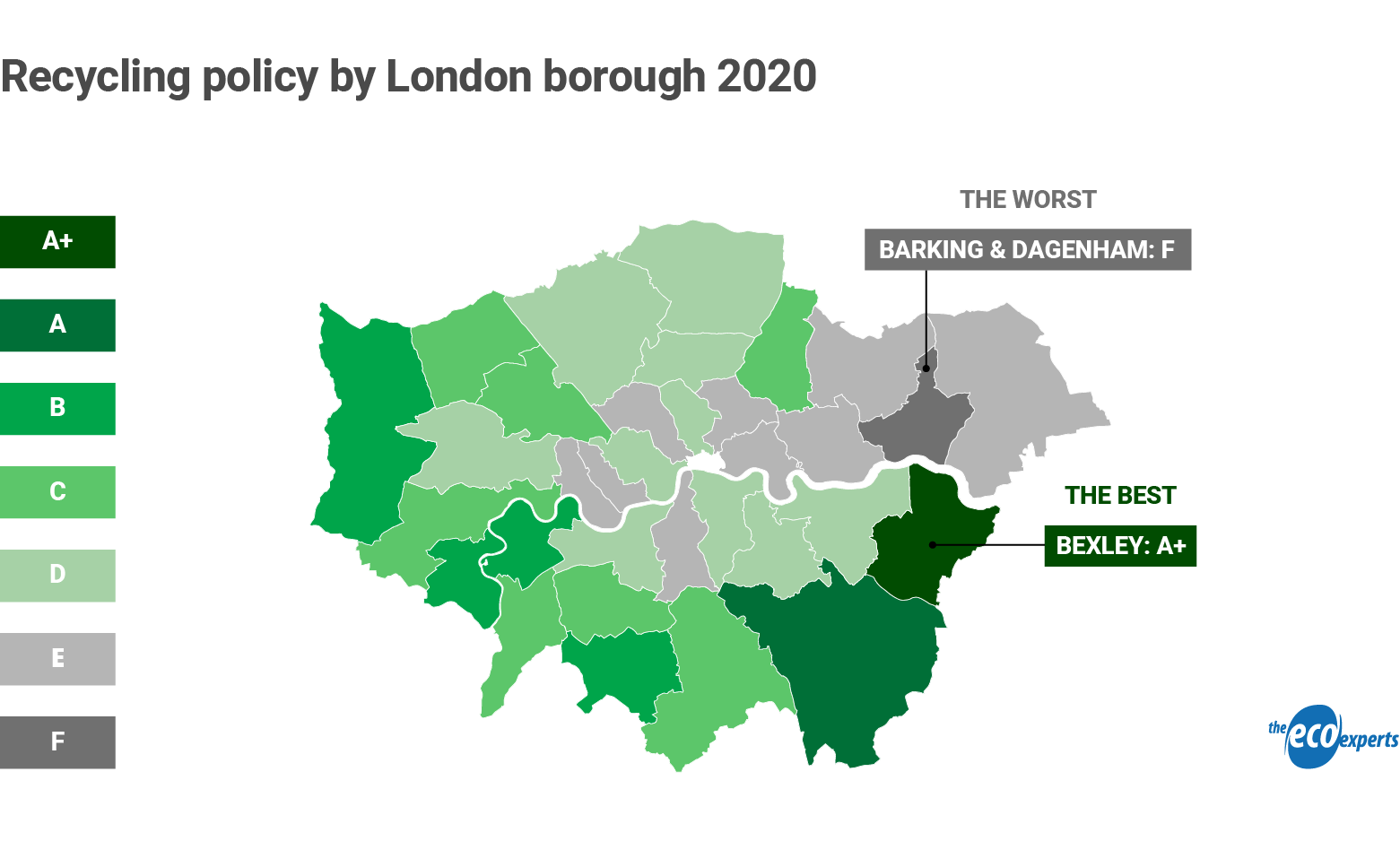 Here are some quick tips for how to help your local council’s recycling efforts.

Want to know where we got it all from? Get the full dataset and sources.