✔ The City of London is the most polluted London borough

Pollution is a scourge on our planet, and a threat to humanity’s existence.

Air pollution causes 3.7 million premature deaths every year globally, and kills enough crops to feed millions of people, according to the National Centre for Atmospheric Research – plus, it’s the driving force behind climate change.

And while most of our attention is on emissions, noise pollution also contributes to health issues, from high blood pressure to type 2 diabetes and heart attacks.

Light pollution also speeds climate change along, especially as it affects 83% of the global population, according to National Geographic.

Excessive light disrupts ecosystems, causes animal deaths, and can lead to an increase in incidences of stress, anxiety, fatigue, and even cancer in humans.

These dangers are felt keenly in London, so we’ve compiled the relevant data to let you know which of the capital’s boroughs are the best (and worst) for your health.

We took these borough-specific figures, and created a London average for each category of pollution. For example, the NOx average was 1,300.13 tonnes per borough.

But that wasn't fair – after all, every borough is a different size, with a different number of people.

So we took these averages, measured them against the population and area of each borough, and created a borough average in every pollution category.

We then found the average of those averages, to create an overall score for every borough that was either above the London-wide standard, or below it.

The figures we ended up were comprehensive, but difficult to instantly understand – so we created a system based on five-point gaps.

If you score 2.5 above or below zero, you score 0. For every five points more or less than that, you gain or lose a point.

The scores range from -16 to 7, apart from the City of London, which scored a hideous -75.

We've also graded the boroughs, just to make their pollution performance as clear as possible.

This is how each borough fares against other regions of the capital. Our infographic moves from the relatively less polluted light reds, through the more ominous shades around the fringes, to the worst offenders in the darkest colours.

The black stains on the capital’s conscience are Hillingdon – which contains Heathrow Airport – and the City of London, a gargantuan centre of finance and business.

Each workday, the City’s population goes from 8,700 to 500,000 – making it both the smallest and largest area by population. 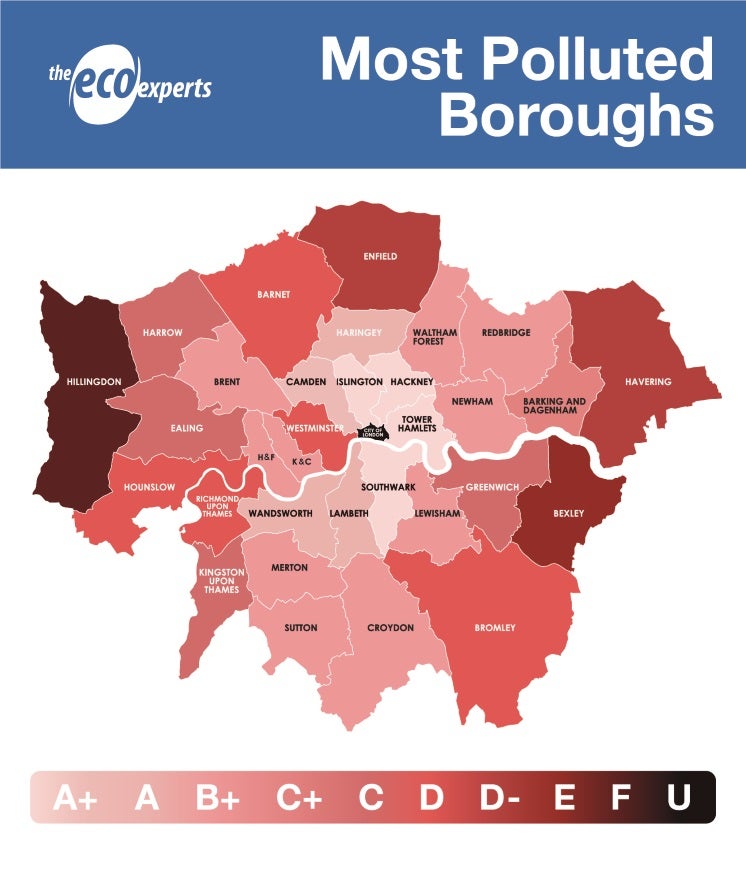 Most polluted areas in London

Advances in technology, science, and the law meant that from 1891 to 2016, air pollution in London fell by 97.6%, according to Our World in Data.

And even within our lifetimes, we’ve seen change. From 1970 to 2017, emissions of various dangerous gases including ammonia, particulate matter (PM10 and PM2.5), and sulphur dioxide have all massively decreased.

But pollution is still a clear and present danger. Two million people live in areas with toxic air, including 400,000 children, according to the London Atmospheric Emission Inventory.

And Dr Audrey de Nazelle, a senior lecturer at Imperial College London, told The Eco Experts that there hasn’t been a significant shift towards reducing pollution in recent times.

“Air pollution levels are not better than they were historically. The type of pollutants has changed, and the sources have changed, but it’s been stagnating for the past few years. 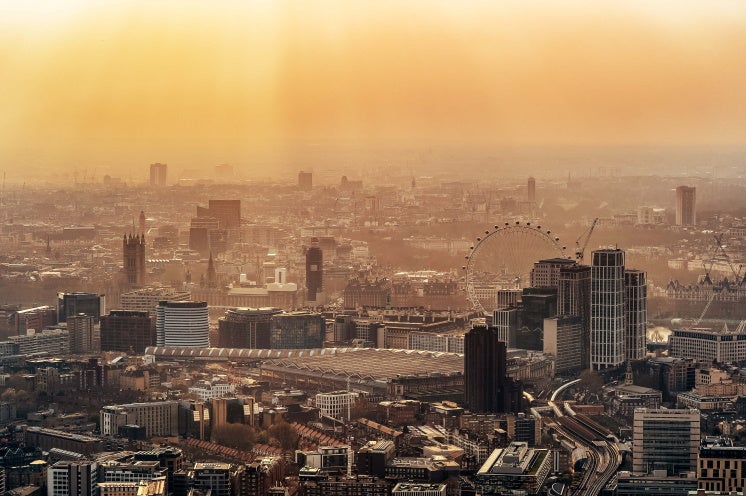 The professor said London’s current state when it came to pollution levels was “definitely still problematic – the air quality in London is definitely not good.”

However, she called on Londoners to stay in the city.

“People should raise their children in London, rather than commute from a rural area every day,” said the professor.

“Invest in what we have, and make our cities healthier places to live. There's no reason we can’t make it even better by reducing air pollution – we just need the political will.”

60% of UK residents want to go greener, so there may be hope on the horizon.

Air pollution contributes to around 40,000 early deaths per year across the UK, according to a 2016 study by the Royal Colleges of Physicians and of Paediatrics and Child Health.

9,500 of those annual premature deaths occur in London, a 2015 study revealed.

Air pollution has also been linked to multiple negative effects, from psychosis in young people to miscarriage.

Which zone you live in can affect your wallet – but it can also harm your health.

We’ve taken all the ratings for each borough, and found the overall average for each zone.

Zone 1 is the worst for pollution – and that’s not surprising. After all, it includes the City.

Zone 6’s poor performance, however, does seem strange – until you realise it includes Heathrow, and numerous boroughs on the edges (we’re looking at you, Hounslow, Bromley, Enfield, Havering, and Bexley) where cars are the primary mode of transport.

Is London a polluted city?

London is absolutely a polluted city.

It’s by far the worst area of England for light pollution, according to the Campaign to Protect Rural England. Of the 20 brightest districts in the entire country, 19 are London boroughs.

And out of 326 English districts, all of the capital’s boroughs are 232nd or lower for light pollution – which means they’re all in the bottom 29%.

“London is the brightest region (in England), with no truly dark skies.”

Air pollution is also a plague on London. It reduces the average Londoner’s life by about a year, according to The London Air Quality Network.

And you just have to walk through the streets of London to hear the abundant noise pollution.

But change is possible. We’ve eradicated sources of pollution before – the Thames is no longer full of faeces, death, and toxic run-off, for instance – and we can eliminate more.