What Actually Is Insulate Britain – and What Is It Demanding? 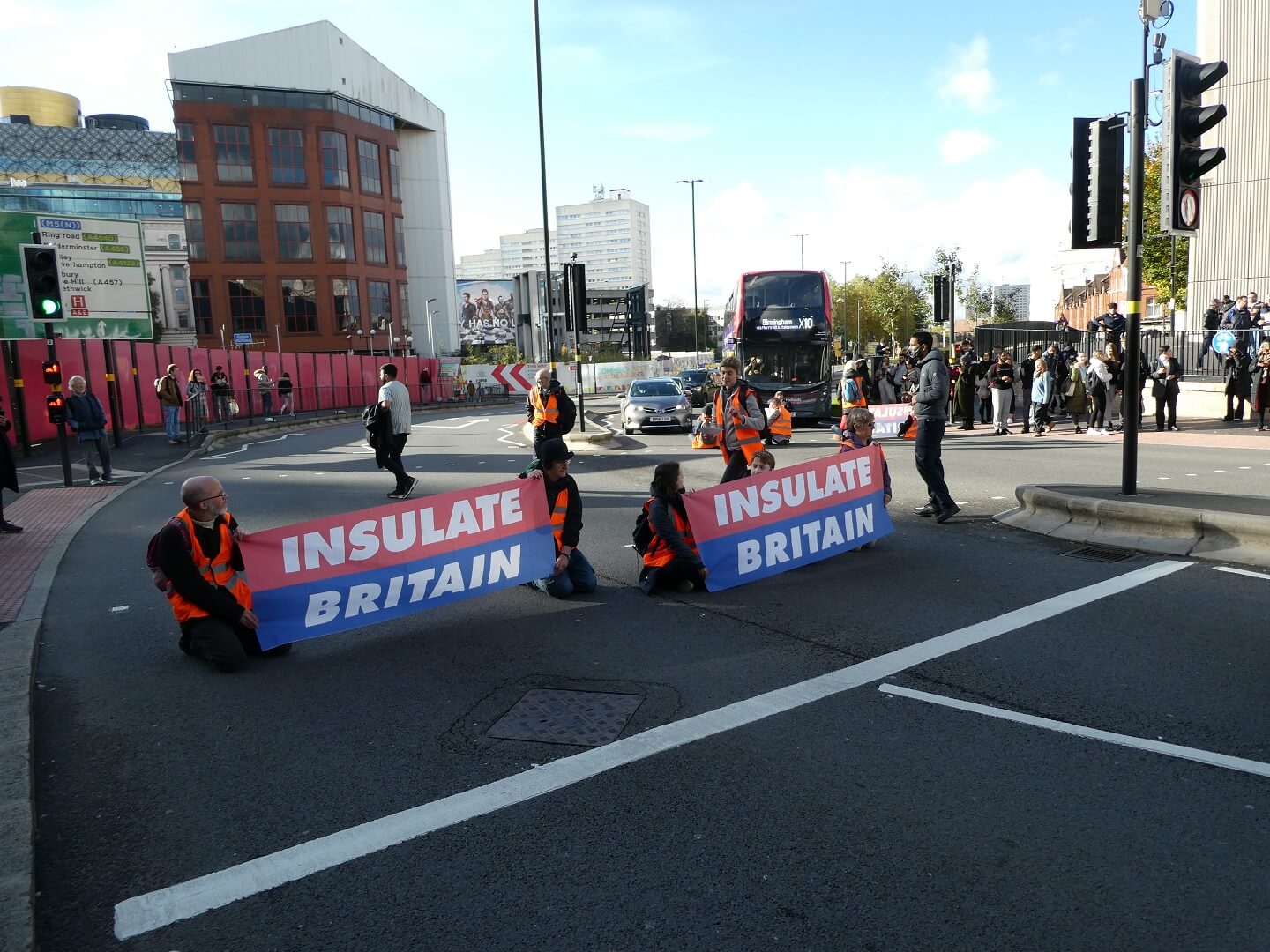 Almost everyone in the UK is familiar with Insulate Britain by now – whether you’ve seen it on the news, heard about it through a friend, or even been stopped by its protesters on your commute.

And yet, not many of us know what this activist group actually is, what it stands for, and what it’s demanding from the government.

Instead, most people only know that Insulate Britain’s campaign tactics have caused a lot of traffic and a lot of anger.

So, let’s take a look at what this group is actually asking from the government.

🦺We demand the government to avert the horror of climate breakdown

📣This is your family, children and homes WHERE DO YOU STAND? pic.twitter.com/jjBNWJAif4

What is Insulate Britain?

Insulate Britain is a group of activists urging the government to tackle climate change by properly insulating all British homes by 2030.

The group started its campaign in summer 2021. It was originally set up by members of Extinction Rebellion (XR) and people from other environmental networks, and has been holding protests across England and Wales ever since.

Despite good intentions, Insulate Britain’s controversial protesting techniques have landed the group with a lot of criticism.

What is Insulate Britain demanding?

There are two key things that Insulate Britain is urging the government to do:

The suggestion of a nationwide insulation plan hasn’t just been plucked out of thin air. Insulate Britain is keen to point out that the Institution of Engineering and Technology (IET) 2018 report also advises that nearly every home in the UK needs to be upgraded with energy efficiency measures.

Why are they demanding this? It all comes down to saving the planet.

Speaking to The Eco Experts, a spokesperson from Insulate Britain stated:

“We face famine, mass migration, and, ultimately, societal collapse – millions will die. The plain fact is that the policies of our government are taking us in entirely the wrong direction. This means they are colluding in genocide.”

What does the UK government need to do to meet its demands?

…A lot. In fact, if the government needs to upgrade every home in the UK between now and 2030, it’ll need to make improvements to 9,520 households every day. Currently, 59% of homes in England and Wales have a D, E, F, or G rating on their Energy Performance Certificate (EPC), a situation that needs to improve massively if the UK government wants to reduce emissions.

According to Insulate Britain’s report, there are a few other things that the UK government needs to bear in mind. We’ve listed their suggestions below.

When it comes to insulating homes, the UK government has made mistakes in the past.

If the government goes through with a retrofitting scheme, they need to make sure they have the right infrastructure and workforce to do it – unlike when they introduced the Green Homes Grant scheme. This £2 billion initiative covered two-thirds of the cost of home improvements designed to cut energy bills and carbon emissions.

However, the scheme only improved 6.5% of the original 600,000 homes target, due to a lack of suppliers.

In its report, Insulate Britain was also keen to highlight the importance of the UK government learning from the Grenfell Tower Inquiry. By putting clear legal rights and chains of responsibility in place, they can make sure that insulation has good ventilation, avoids damp, and – above all – is safe.

Invest more money into the project

There will need to be a significant upfront investment to insulate all homes in the UK.

The government, therefore, needs to come up with ways to support homeowners with the upfront costs during this transformation.

Insulate Britain suggests that the Green Finance Institute’s Property Assessed Clean Energy (PACE) financing scheme could be a key way to do this.

The plan allows homeowners to receive funding to cover all upfront costs for retrofitting. Rather than the government simply giving this money away, homeowners will be able to repay it through an additional property tax over an extended period of time.

Around 40 eco protesters from Insulate Britain have blocked Parliament Square, glueing themselves to the road and bringing traffic to a halt.

What impact will Insulate Britain’s plans have on the environment?

As of 2020, the combined UK household emissions were 133 million tonnes of CO2 equivalent. No matter what your stance is on Insulate Britain, there’s no denying that its plan will cut this carbon footprint down drastically.

The group’s report has a key focus on removing fossil fuels from domestic use, which will be an important step in reducing household emissions.

It’s also important to note that replacing fossil heating with eco-friendly alternatives, such as heat pumps, can still result in high electricity bills and large carbon footprints if there is no insulation to seal in the heat.

How will the plans affect Brits?

As well as helping the environment, Insulate Britain suggests that upgrading home energy performance will also have a positive impact on Brits.

According to the group’s report, a retrofitting plan would save lives and raise the standard of living in the UK dramatically. On top of this, it will create thousands of jobs in the energy industry and the construction sector.

Insulate Britain also states that it is key to have a plan that is co-produced by homeowners, tenants, leaseholders, and retrofit professionals, in order to develop the best route to a zero-carbon home. This means we all get a say in how the plan is delivered.

Despite wanting to save the planet, reduce emissions, and help Brits, Insulate Britain has garnered itself a very bad reputation in a very short amount of time.

The group’s disruptive protests have wreaked havoc on Britain’s major roads for months. As a result, many motorists have been stuck in standstill traffic, unable to pass the protesters blocking the roads – some of whom have, in the past, glued themselves to the tarmac.

Although this has been an inconvenience for many, for others it’s become something much more serious. On 4 October, at Blackwall Tunnel near Canary Wharf, a woman was prevented from following her 81-year-old mum in an ambulance to hospital by the blockade.

And in late September, a woman suffered from a stroke whilst stuck in traffic caused by Insulate Britain. Unfortunately, she is now completely paralysed down her left side because she had been left to endure a stroke for six hours.

These scenes have left many feeling angry, questioning why these protesters are causing such destruction. In response to the anger, a spokesperson for Insulate Britain told us:

Insulate Britain might not work, but we think that it has more of a chance than anything else. Yes, we're causing disruption to ordinary people and it’s annoying, but this is nothing compared to what is bearing down on us.”

How are people responding to Insulate Britain?

The public is not responding well – after all, they're the ones getting stuck in traffic.

Various MPs across the UK have also condemned the activists for blocking roads. Caroline Nokes, Conservative MP for Romsey and Southampton North, stated: “The stark reality of this sort of protest is they do not just inconvenience and disrupt people’s lives, they can impact health and they impact jobs.”

However, when asked about the public’s anger, a spokesperson from Insulate Britain told us: “Even those who disagree with our tactics support our aims.”

Despite receiving backlash, some high-profile figures have even backed the group. Green MP Caroline Lucas told Sky News that her party “believes non-violent direct action is legitimate when other forms of trying to raise issues with the government have failed.” She added, “In emergency situations, we need to take emergency action and I believe that's what those protesters were doing.”

Insulate Britain has stated that it will not back down with its campaign until the government agrees to its plans. So, however long the public has to put up with disruptions will come down to the government’s next move.

Despite the months of protests, many people are still unaware of the message Insulate Britain is trying to push, and the government shows no sign of giving in. This begs the question: is it better to have support and spread awareness of the plan, or to poke the fire and simply get people talking about you for the wrong reasons?