A Guide to the Halogen Bulb Ban

✔ The ban is set to cut the UK’s annual emissions by 1.26 million tonnes

The halogen bulb ban came into effect across the UK on September 1st 2021.

The move comes ahead of a ban on the sale of fluorescent lights from September 2023, which will affect businesses all over the country.

We’re going to cover how the halogen bulb ban will affect you, and what actions you should take as a result. 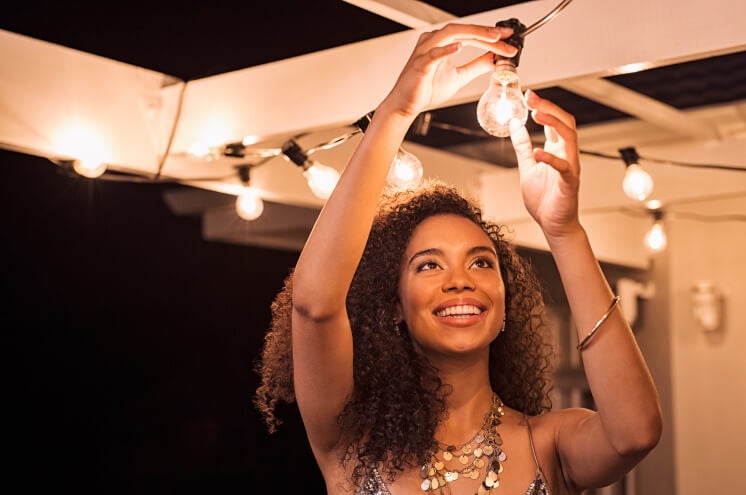 Why have halogen bulbs been banned?

Halogen bulbs have been banned to save customers money, reduce energy usage, and cut the UK’s emissions.

In 2018, the UK government agreed to a European Union directive that has slowly eliminated the sale of inefficient light bulbs.

Non-directional halogen lamps were the first to go, in 2018, and halogen bulbs are the latest outdated model to be banned across the EU and UK.

This was a sensible policy for the UK to follow even after leaving the EU, because halogen lights are awful for your wallet and the world.

The bulb contains a filament enclosed in halogen gas, which allows it to burn hotter than older models (like the incandescent bulb, which was phased out from 2009 onwards), but that comes with disadvantages, especially compared to more modern bulbs.

Halogen lights are worse for the environment than LEDs because they use more energy to produce the same amount of light – meaning you’ll also pay more to use them.

Plus, halogen bulbs can start a fire if they come into contact with a flammable item, and cause burns if you touch them.

Will the ban cut household emissions?

The halogen ban will help the UK to shrink its residential emissions.

They now make up 16% of the UK’s annual footprint, partly because governments haven’t done enough to reduce them in the last few decades.

Homes emit 13.5% less than they did in 1990, according to government data – which sounds fine, until you realise the UK has cut its overall emissions by 49% since then.

Residential emissions have fallen at a slower pace than every sector apart from agriculture, and the government needs to pick up the pace if the UK is going to be a net-zero emissions country by 2050.

Do you have to get new bulbs?

You don’t have to replace your halogen bulbs until they stop working – but you may want to act sooner, so you can start benefiting from LED lights.

LEDs currently make up two-thirds of bulbs sold across the country – and for good reason.

They typically last five times longer than halogen bulbs, and give off the same amount of light while using 80% less energy.

This could significantly reduce your electricity bills, with the average household able to save £40 per year by replacing all their bulbs with LEDs, according to the Energy Saving Trust.

When buying new bulbs, watch out for the new energy efficiency labels, which now use a scale from A down to G. This move is intended to simplify a system that had confused consumers with the addition of A+, A++, and A+++ rankings.

And as ever, if it looks complicated to replace any of your bulbs, hire an electrician. It’s never worth the risk of messing up your wiring.

How much will replacing halogen bulbs cost?

If you go for the environmentally and financially superior option of LEDs, you’ll pay about £145 to replace all your bulbs.

With an annual energy saving of £40, you’ll recoup that investment in well under four years – and LEDs usually last between 15 and 20 years.

That means that over their lifetime, you’ll make an average profit of £555 from buying LEDs.

What will be the long-term effects of the ban?

The government expects the ban to increase the popularity of LEDs, which it says “will account for 85% of all bulbs sold by 2030.”

This will save households money on their energy bills, help the country to avoid another energy crisis, and cut the UK’s emissions.

In fact, the government has estimated the ban will save 10.6 TWh of energy per year by 2050, which will slash the country’s annual emissions by 1.26 million tonnes of CO2.

Getting rid of halogen bulbs is therefore a no-brainer, with no drawbacks aside from slight short-term inconvenience – though we shouldn’t overstate its environmental effects.

Eliminating more than a million tonnes of CO2 is fantastic, but it’s a small step.

Even if the government’s estimate is correct, the ban will reduce the country’s annual emissions by just 0.3% – and only in 2050.

The same is true of the government’s predicted reduction in energy usage. 10.6 TWh is substantial, but it’s just 0.5% of the 2,205 TWh the UK consumes per year.