In a bid to hit climate change goals, Danish politicians have given the go-ahead for the world’s first wind-energy island.

The artificially constructed island, set to be located 80 kilometres from the shore of the peninsula Jutland, will serve as an offshore power plant, gathering green electricity from hundreds of local wind turbines.

As the biggest construction project in Danish history, the energy hub will cost an estimated 210 billion kroner (£24 billion) and will be able to power roughly 3 million houses in its first phase. 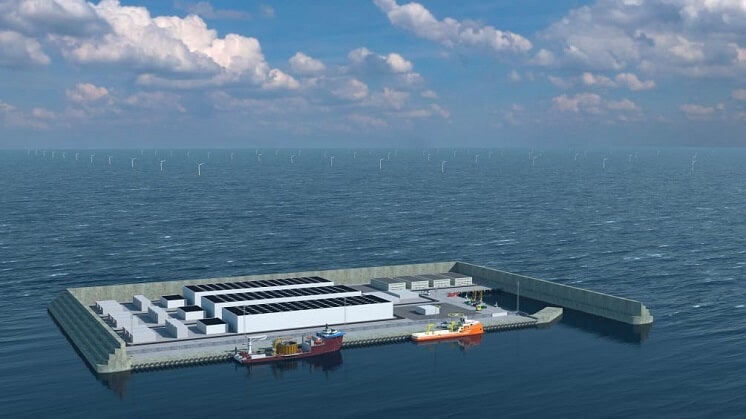 An illustration of what the energy island should look like once completed. Source: Danish Energy Agency

What can we expect?

This eco project will be a public-private partnership between the Danish state and private companies – with the state owning the majority of the island.

In a broad deal struck on Wednesday 3 February, the Social Democrat government agreed with its support parties and the rightwing opposition that the state should hold a 51% stake in the island, with the remainder held by the private sector.
The island is expected to begin harvesting energy in 2026. Over the course of the next five years, the government will prepare for the project by carrying out environmental assessments on the surrounding sea bed, rallying up private sector partners, and signing deals to connect the energy island to Belgium, the Netherlands, and Germany.

According to the Danish Energy Agency, the power generated on the island will not only supply electricity for Danes but for neighbouring countries' electricity grids too.

Although those countries have not yet been detailed, Professor Jacob Ostergaard of the Technical University of Denmark told the BBC that the UK could benefit.

How will this impact Denmark’s emissions?

In its first phase, the island will cover at least 120 square metres (the size of 18 football pitches) – providing enough green energy to power 3 million European households.

Fully implemented, with a second island to accompany the first, this project will be able to supply a grand total of 10 million households.

The main goal? To help Denmark hit its ambitious 2030 target of cutting greenhouse gas emissions by 70% from 1990 levels. The country has even introduced a cutoff date of 2050 for oil and gas extraction in the North Sea, as well as cancelling all future licensing rounds.

“The EU has set a goal to achieve climate neutrality by 2050 and the Commission has set a target of 300 GW of offshore wind energy in order to attain this goal. By constructing the world’s first energy hub with a potential capacity of 10 GW, Denmark significantly contributes to this ambitious target.

Not only by dramatically expanding renewable energy production, but also by supplying our European neighbours with an abundance of renewable energy” –  the Danish Minister for Climate, Dan Jørgensen.

Jørgensen praised the new project as “a great moment for Denmark and for the global green transition”. Indeed, this island is a promising moment for Danish green energy, but it’s also likely to encourage other countries to follow in Denmark’s footsteps.