The Effect of Coronavirus on Pollution in the UK

✔ Flights have declined by 69%

Coronavirus has infected 745,000 people and killed more than 35,000. It’s a global pandemic beyond anything anyone alive has experienced, and its effects are wide-ranging.

One of these consequences is a sudden drop in pollution.

Quarantine and self-isolation have prompted a 25% reduction in energy usage and emissions in China, according to Carbon Brief, and other countries will end up with similar pollution decreases.

The UK hasn’t yet been hit as hard as some other countries, sitting 10th in the overall list of cases for now, but the country’s peak infection rate is still to come.

On March 19th, Prime Minister Boris Johnson said Britain was set for 12 weeks of fighting COVID-19. That means even after the current country-wide lockdown is over, we’ll be enjoying social distancing and self-isolation well into June.

While domestic energy emissions are likely to rise, other sources of pollution – like transport and businesses – will be less active.

Overall, the amount of CO2e emissions (carbon dioxide equivalent, which is calculated by comparing the effect of all other gases to CO2, to find one simple measure) is set to fall dramatically over the next 12 weeks.

Looking to reduce your carbon footprint? Our guide to solar panel costs is a great place to start. 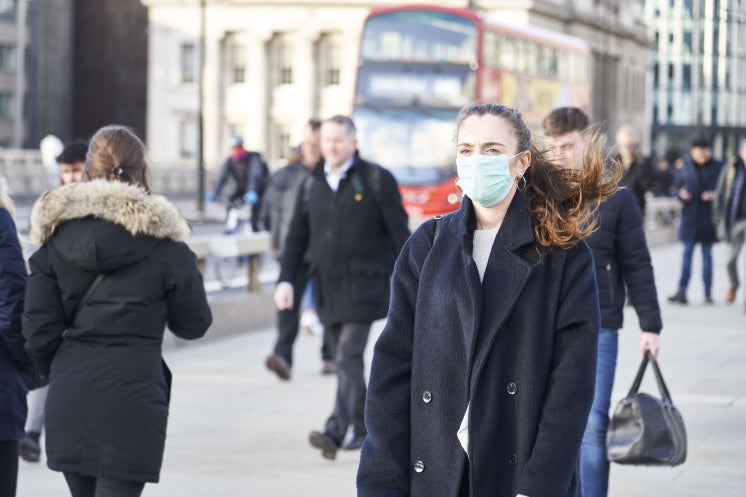 There are two parts to this: public transport services are being shut down or reduced, and millions of people have stopped going into the office or travelling at all.

The UK has 30.5 million workers, according to the Office for National Statistics (ONS), and the government has told all of them – apart from anyone in vital sectors like the NHS, police, and childcare – to stay home, under lockdown. Those unable to work due to COVID-19 will receive 80% of their wage.

In 2019, BBC News revealed that 1.54 million people work from home. Employment lawyer Mini Setty of Langleys Solicitors told The York Press that up to 10 million more people will work from home during the coronavirus crisis – an 870% increase.

We think the eventual number will be higher.

Four of the five UK industries with the most employees – wholesale and retail trade, human health and social work, education, and professional, scientific, and technical services – contain sections classed as vital.

But all of them include infected people, at-risk groups, and employees who can work from home – and most of the UK’s 500,000+ full-time teachers will not be working at the moment. 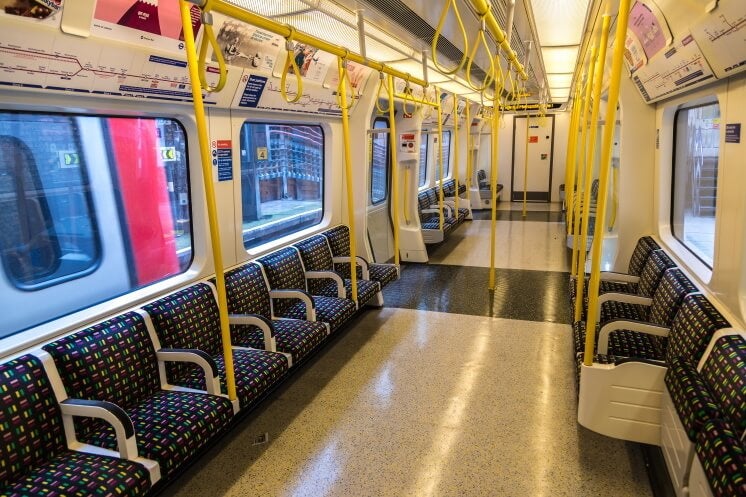 The latest NHS report shows the organisation has 1.5 million staff, meaning that the healthcare sector makes up 4.9% of the entire working public. All of these brave souls will be going to work throughout the crisis.

That’s 1.65 million people so far. The rest of the key workers, including religious staff and many of those in government and transport, will make up only around 200,000 people – which makes 1.85 million workers – or 6% of the British workforce.

And since retirees, the unemployed, and those too young to work will also be staying inside, we estimate that 64.55 million won’t use transport of any kind.

If 97.2% of people who usually use public transport stay at home for 12 weeks, that means an overall reduction of 1.76 million tonnes of CO2e.

In New York, Columbia University researchers have found that air pollution from cars and trucks fell by around 50% compared with the same week in March 2019, according to BBC News.

This percentage is likely to rise, both in the US and as the lockdown progresses in the UK, where road transport was responsible for 118 million tonnes of CO2e in 2017, according to the ONS.

That’s 93.7% of all road pollution, and 21% of the UK’s total greenhouse gas emissions.

Road vehicle reductions will be lower than 97.2% – the percentage of people staying at home – because many trucks will still be needed to deliver vital supplies to hospitals and those in self-isolation.

These vehicles will be less likely to be stuck in traffic, and therefore give off less pollution – but they’ll still be responsible for a substantial amount of emissions.

If road emissions are reduced by 90% over a 12-week period, this will result in a reduction of 24.5 million tonnes of CO2e.

We can assume that flight numbers will generally fall precipitously over the next 12 weeks. Flights to and from China dropped by 59% from January 1st to March 11th, according to Wired.

UK flights have already declined by 69%, according to Flightradar24 data given to BBC News, and are set to drop much further.

66% of UK flights go to and from Europe, according to the latest Department for Transport data – and with the World Health Organisation having classed Europe as the virus’s epicentre, that figure is set to plummet.

The second-most popular country for people to travel between (behind Spain) is the US – and on March 17th, President Donald Trump banned people from entering the US from the UK.

Two days later, the US State Department increased its global travel advisory to level 4 – “Do not travel” – meaning almost all flights to and from the US will probably all but cease.

And on March 30th, EasyJet grounded its entire fleet – more than 340 planes – for the duration of the crisis.

If we take the tonnes of CO2 that planes released in 2019, according to the industry’s Air Transport Action Group – 915 million – and divide it by the number of worldwide flights in the same year – 39 million – we end up with an average of 23.46 tonnes of CO2e per flight.

If we multiply that by 55,800 flights, we can conclude that UK airports will be responsible for 1.31 million fewer tonnes of CO2 emissions than usual.

69.1 million tonnes of CO2e was produced by residential properties in 2018. That figure is set to rise during the COVID-19 crisis.

In the first week of mass self-isolation (starting March 16th), domestic gas and electricity usage rose by 4%, according to research by energy firm Octopus – which adds up to £4.78 more per week, on average.

This number will increase further as the lockdown progresses, reaching around 15%.

However, this will be more than offset by the amount of CO2e saved by businesses shutting down their offices and factories for much of the 12-week period.

The business and industrial sectors produced 89.2 million tonnes of CO2e in 2018. This rate will fall by as much as 20% over the 12-week lockdown, energy company Limejump has estimated – which equates to 4.11 million tonnes.

That means Britain will save 1.72 million tonnes of CO2e during the 12-week coronavirus lockdown.

The effect on London

COVID-19 could result in a massive reduction of greenhouse gases in the capital, which is the most polluted city in the UK.

Air pollution reduces the average Londoner’s life by about a year, according to The London Air Quality Network.

But the drop-off in emissions has been huge since COVID-19 forced people to change their behaviour en masse.

This is clear in the statistics around NO2, a type of pollution that can cause the airways in your lungs to inflame, affect how well you can breathe, and have a negative impact on wildlife.

The potential drop in emissions

It’s impossible to know exactly how much less pollution London will emit over the 12 weeks of the COVID-19 crisis.

But if we assume that 97.2% of people won’t leave their home, just like the rest of the country, it will have roughly the same reduction on the city’s emissions.

This could result in London’s PM2.5 emissions (particulate matter with diameter of less than 2.5 micrometers) finally meeting the World Health Organisation’s guidelines.

All of the above comes with the caveat that the crisis may last longer than 12 weeks, and consequently lead authorities to more severely restrict people’s movements than they have done so far.

It’s also near-impossible to calculate the impact the virus will have on manufacturing or agriculture, or the ways in which it will change how we function as a society.

And of course, the foremost issue is the immense loss of human life that will come from this global pandemic.

We’re reducing pollution and emissions so we can save humanity, after all.