Vegetarianism used to be a rare subculture of society, whose members had long hair, wore hemp jumpers and faced ridicule from the meat-eating population who simply couldn’t fathom why anyone would choose a quinoa and grilled halloumi salad over a 16 oz. hunk of beef. But times have changed, and it seems that vegetarianism has now become – dare I say it – mainstream. Trendy, even.

Like rabbits, vegetarians have multiplied at an unstoppable rate. While some folks might say that people are “just giving that vegetarian thing a try”, statistics say the opposite. Take the UK, for example. In the last 10 years, the number of people adopting a meat-free diet is up a huge 360%, with over 7 million Brits now identifying as vegetarian. So it would appear that #plantbased eating is no longer just a fad, but a way of life. What a bloody triumph for tofu.

But how vegetarian-friendly is the UK compared to its European neighbours? Here at The Eco Experts, we got vegucated. Using 100% organic data, we set out to unearth the best European country for vegetarians.

To measure a country's vegetarian ‘friendliness’, we combined and weighted 3 data points across 26 countries (we excluded any countries that were missing data): the number of vegetarian-friendly restaurants per 100,000 people, annual meat consumption per person, and the average price of 1kg of meat. Each country was then given a ranking out of 26 and put in order from best to worst.

Check out the results below. 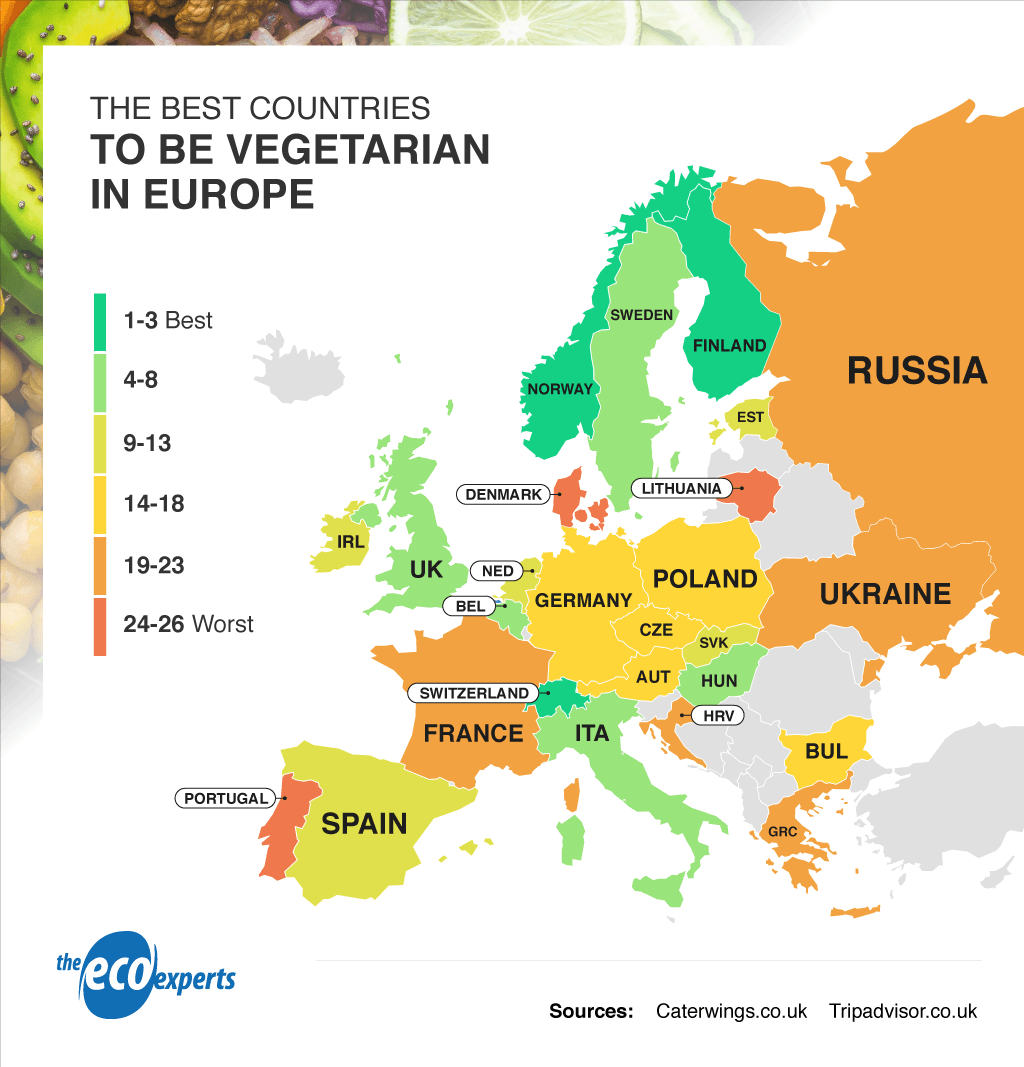 According to our study, Switzerland is officially the European epicenter of vegetarianism. Home to Hiltl, the oldest vegetarian restaurant in the world, it’s the trailblazer for the likes of kale, acai bowls and lentils.

In fact, the country boasts the highest density of vegetarian-friendly restaurants in Europe, with 165.94 per 100,000 people. Running a meat-free eatery in Switzerland is certainly a fruitful business, especially because the Swiss population also come in 8th for the lowest amount of meat consumed each year, at just 74.7kg per person.

Even better for Swiss vegetarians is the price of meat. It’s a well-known fact that the country has a ridiculously high cost of living, so it comes as no surprise that Switzerland has the most expensive meat in Europe. Vegetarians in the country save, on average, a massive £24.95 for every kg of meat they don’t eat (although, in reality, this is probably only enough to buy them a tub of hummus).

The carefree and peace-loving Nordic nations are among the best countries to be a vegetarian in Europe, with Finland (2nd), Norway (3rd) and Sweden (4th) all making the top 5 in our list.

Like Switzerland, the price of meat in all 3 of these countries is enough to make anyone to turn their nose up at a tender sirloin. Shunning steak in Finland, Norway and Sweden can save you a tasty £13.75, £16.84 and £15.06 on every 1kg of meat, respectively. Finland and Sweden’s density of vegetarian restaurants to 100,000 people was also pretty impressive, coming in at 5th (67.69) and 9th (58.43) respectively, while Norwegians landed 5th place for their low annual meat consumption (at 66kg per person).

Surprisingly, their Nordic counterpart, Denmark, fell well behind in 25th place. The country’s insatiable appetite for meat, at 95.2kg per person each year (roughly equivalent to a full-grown pig, if you were wondering), and its low density of vegetarian eateries (at just 32.42 per 100,000 people) has crowned Denmark as the black sheep of the Nordic family.

The UK was named the 5th best country to be a vegetarian in Europe. Known for its fashionably overpriced vegetarian hangouts in cities like London, Edinburgh and Brighton, this result will come as no great surprise to most Brits.

In the UK, it’s not hard for vegetarians to stumble across a trendy meat-free restaurant in a trendy inner-city suburb. And the stats don’t lie: our data revealed that the UK is home to the 2nd highest concentration of vegetarian-friendly eateries in Europe, at 80.02 per 100,000 people. Veggie Brits are also savvy spenders when it comes to the weekly shop, saving themselves an average of £9.17 per kg of meat they don’t eat.

The UK did fall short when it came to average annual meat consumption, however. The country chows down the 9th highest amount of meat in the continent (84.2kg per person), probably owing to its love of roast dinners, bangers and mash and a full English breakfast.

If you're looking for ways to improve your carbon footprint in the UK, then this guide to solar panel costs is a good place to start.

In last place came Portugal. Birthplace of the legendary francesinha (a calorie-loaded, belly-busting sandwich layered with pork, smoked sausage, bacon, beef, egg and cheese), our research placed Portugal (aka ‘Porktugal’) right at the bottom of the pile.

As the francesinha would suggest, the Portuguese love meat: our research showed that they eat the 4th highest amount of it in the continent (at 95.2kg per person, each year). And unsurprisingly, they have one of the lowest number of vegetarian-friendly restaurants in the continent, offering just 40.62 meat-free eateries to every 100,000 people.

Portugal also has cheap meat prices – great for those that love a cozido a portuguesa (a meat stew, to me and you); terrible for those who’ve a penchant for falafel. Vegetarians in Portugal save a poultry (sorry, I had to) £7.79 for every kg of meat they don’t eat – peanuts in comparison to the savings of those smug Swiss veggies.

No More Quorn-y Puns, We Promise

So there you have it, the definitive list of the best countries to be a vegetarian in Europe. Moral of the story? Switzerland or the Nordic nations (except Denmark, of course) are worth a visit if you’re vegetarian – or simply want to give a meat-free diet a go – while it’s probably best to avoid Portugal if you don’t want to be surrounded by meat maniacs.

Don’t take this research to heart. It’s supposed to be a bit tongue in (beef) cheek.