Bottle-fed babies ingest millions of tiny pieces of plastic every day, according to new research.

Parents are told to prepare formula milk by sterilising plastic bottles with hot water and by shaking the bottle, but this causes bits of plastic to shed, a Nature Food study has found.

The research showed the average bottle-fed six-month-old in the UK consumes more than three million microplastics per day, and countless trillions of nanoplastics.

“We were absolutely gobsmacked.

“A study last year by the World Health Organisation estimated adults would consume between 300 and 600 microplastics a day – our average values were on the order of a million or millions.”

The Trinity College Dublin scientists used international sterilisation guidelines to test the polypropylene bottles, which constitute 82% of the global market, according to The Guardian.

Adults are at risk of unknowingly consuming plastic too. The researchers found that kettles and food containers made of polypropylene also shed millions of microplastics per litre of liquid.

The findings show it’s not just microplastics in your fish that you have to be afraid of, because plastic waste is everywhere. But is it dangerous for you or your infant child?

Quite possibly. We don’t have solid conclusions yet, but a 2018 study at Johns Hopkins and Toronto University connected low-dose exposure to microplastics to cardiovascular disease and type 2 diabetes.

The researchers pointed out that “complementary bodies of evidence indicate likely exposures and potential hazards from both particles and associated chemicals.”

And the New Zealand government-funded Science Learning Hub explains that “microplastics can be retained in the gut for extended periods where they may cause abrasion and damage to internal tissues.

“Nanoplastics can pass through the gut wall and travel to different parts of the body, such as the lungs and liver, where they can cause damage.”

Boland told The Guardian more research was needed, saying: “We have to start doing the health studies to understand the implications.” 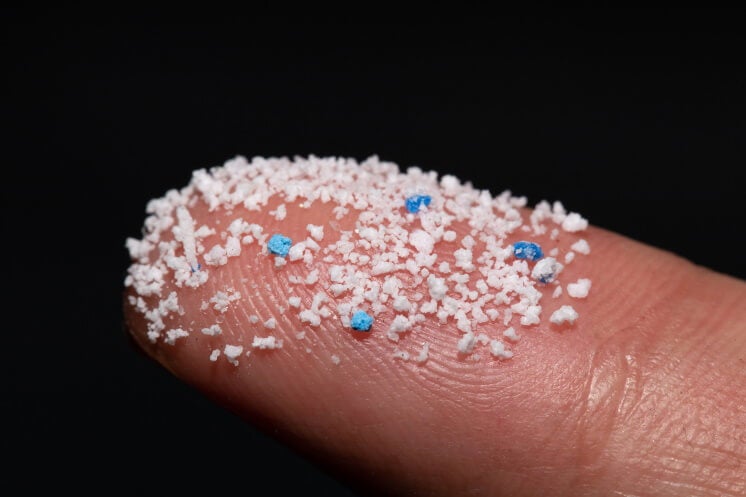 It's not yet clear how harmful microplastics are to humans

What can you do?

You could follow Boland’s example and throw away your plastic containers, as they release millions of microplastics when you shake them or pour hot water into them.

The researcher explained: “I’ve already gotten rid of all those [food] containers I used to use and if I had young children I would modify how I prepare [milk formula]. The message is the precautionary principle.”

You could also use glass bottles, though these are heavier for children or tired parents to hold, and are of course breakable in potentially dangerous ways.

If you do use a plastic bottle, Boland recommends that after you’ve sterilised it, you should boil water in a non-plastic receptacle, let it cool, and use it to rinse the bottle three times.

Make the formula in a non-plastic container too, then let it cool before pouring it in.

Boland said: “That will dramatically reduce the number of microplastics.

“The last thing we want is to unduly alarm parents, particularly when we don’t have sufficient information on the potential [health] consequences.

“However, we are calling on policymakers to reassess the current guidelines for formula preparation when using plastic infant feeding bottles.”