A Guide to the UK Government’s Plan for Zero-Emissions Trains, Planes, and Automobiles

✔ There’s no tax on frequent flyers

The government’s delayed transport decarbonisation plan was finally released in July 2021, with some new commitments and a host of regurgitated promises.

Together, they form a plan for the future of transport that aims for net-zero emissions released by trains, planes, and automobiles – with electric car drivers set to profit.

Thanks partly to £1.3 billion of government investment, driving an electric vehicle will become cheaper and more convenient for an increasing number of people in the UK over the next four years.

Electric cars are key to fulfilling the government’s legal responsibility to ensure the UK reaches net-zero emissions by 2050.

“Domestic GHG emissions from transport have been broadly flat for the last 30 years, even as those of other sectors have declined.”

Transport produces 27% of the UK’s emissions, 71% of which is down to cars and vans.

Transport is long overdue a plan to tackle its emissions, as its total has only fallen by 4.6% since 1990 – a paltry amount compared to every other sector.

Emissions from energy have dropped by 65%. For waste management, that figure is 70%. Industrial processes? 83%. Even the business sector has cut its emissions by 31%.

Here’s how the government intends to change the transport landscape, and what it means for you.

The government finally admitted in its Decarbonising Transport report that it will reconsider the £27 billion road-building strategy it created in 2014, which estimated that road traffic would increase by up to 50% by 2050.

This moment of joined-up thinking came after the government announced sales of new petrol or diesel-powered cars and vans will be banned from 2030.

The report stated the government would ensure “revenue from motoring taxes keeps pace” with the shift to electric vehicles, suggesting new future taxes on petrol and diesel cars.

All new motorcycles and scooters must also be zero-emissions models from 2035, subject to consultation.

The government also said it will ban the sale of new diesel trucks weighing more than 26 tonnes by 2040, with 2035 the cut-off date for smaller diesel trucks.

This has provoked criticism from hauliers, with Rod McKenzie of the Road Haulage Association telling The Guardian: “These alternative [Heavy Goods Vehicles] don’t yet exist, we don’t know when they will, and it’s not clear what any transition will look like.

“So this is a blue skies aspiration ahead of real life reality.”

Whether or not he’s right, these new regulations make electric vehicles the only reliable path forward – especially as cars are currently responsible for 55% of our transport emissions.

Plans for an electric future

While the government is waiting and hoping that private innovations will make its ambitious rail and air travel targets realistic, electric road vehicles are already here.

That allows the government to pump funding into the industry, which it is doing – to an extent.

The government has committed £1.3 billion to subsidising the creation of more charging stations over the next four years, including 6,000 ultra-rapid chargers.

And a goal to electrify the government’s own 40,000-strong fleet by 2027 shows a willingness to put its money (and vehicles) where its mouth is – or at least give that impression.

All private charging stations will also have to include smart capabilities, allowing users to charge when electricity is cheapest.

Having your own charger will help you save money in the long run, but it’s also important for people to be able to access charging stations across the country.

£950 million of the government’s still-limited funding for electric vehicles is set to go towards upgrading electricity connections at motorway service stations, to make it easier for private companies to set up chargers there.

The report stated: “We will support the private sector to deliver at least six high-powered chargepoints at every motorway service area in England by 2023.” 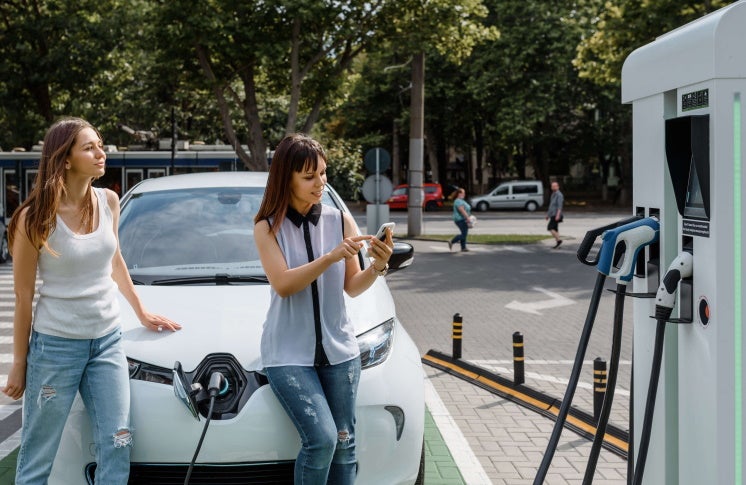 The Electric Vehicle Homecharge Scheme, which could save you £350 on the cost of your home charging station, will continue “until at least 2024/25” – but it’s set to change.

From April 2022, houses won’t be able to access this scheme, with renters and people living in flats able to take advantage instead.

Again, it seems half-hearted not to provide the scheme to all.

The government said it was also considering “the possible introduction of a zero emission vehicle (ZEV) mandate, as recommended by the Climate Change Committee.”

This mandate would compel vehicle manufacturers to ensure that electric vehicles make up a certain percentage of their sales – but if they’re set to fall short, companies can buy credits from each other so they don’t miss the target.

The government wants domestic flights to reach net-zero emissions by 2040, and international flights to get to net-zero by 2050.

However, it seems to be relying on offsetting and an ambitious rate of technological progress to reach these goals, with no new taxes suggested.

In the report, the government mentioned planes being powered by electricity, hydrogen, and sustainable aviation fuel, none of which currently seem realistic.

Green Party MP Caroline Lucas told BBC News that the government was taking “a flight of fantasy” by basing its goals on technology that doesn’t exist yet.

“The government should not hoodwink us,” she added.

“With aviation, the net zero targets are welcome, but getting there through technological advances alone is a very big bet on very long odds,” he said.

“If it happens, everyone will be delighted, but we need a mechanism to achieve those same emissions cuts if the advances don’t materialise, and that can’t be offsetting.”

“Unless we’re very lucky, we’ll need some demand constraint – and it would be foolish of the government not to be planning that now.

“A frequent flier levy has been shown to be easily understood and a fair mechanism for containing unsustainable demand … it also has the big advantage of being available to implement now.”

The government wants to achieve a net-zero rail sector by 2050, with diesel-only trains taken out of service by 2040.

To do this, it will look to develop its electrification programme – which has made 38% of the network electric – and green hydrogen-powered trains.

Construction projects like HS2 mean that the government will have to hurry this electrification process in particular, to ensure the road to net-zero in 2050 isn’t marked with big spikes in emissions before then.

Launching a plan for fare reductions would have been an easy way to get more people to take trains, but there is nothing even approaching a concrete promise in the report.

This is strange, since the report itself points out that “over the last 20 years, in real terms, the cost of motoring fell by 15%. Over the same period, the cost of rail fares went up by over 20%.”

The government’s Decarbonising Transport report is encouraging, but for now, it’s all talk.

The government’s plans for rail and air travel to be net-zero by 2050 are positive, but the same report outlines how 2021/22 will see just £21 million of government investment in aviation and £31 million in rail travel.

More investment and concrete plans must be put in place to make net-zero a realistic prospect. A new tax on frequent flyers would be a good – if overdue – start.

The future looks much rosier for electric vehicles, which are already set to be cheaper than their fossil-fuelled counterparts by 2027, paving a clear road to net-zero.

However, with more energetic government interventions, that point could come much sooner – which would have a big impact on the fight against climate change.

A £1.3 billion investment in charging points over the next four years is a worthwhile step, but stopping houses from getting subsidised charging points from April 2022 and cutting the plug-in grant from £3,000 to £2,500 in March 2021 were regressive, penny-pinching moves.

All people want is an electric car that’s just as good, just as easy to refuel, and costs just as much as a fossil-fuelled car, as well as being cheaper to run (which it already is).

Unfortunately, the government is too worried about spending even a little more than might be necessary that it limits progress and ensures public enthusiasm is stifled by an overbearing upfront cost.