28 trillion tonnes of ice disappeared from the Earth’s surface between 1994 and 2017, according to new research.

They laid the blame at humanity’s feet, writing: “There can be little doubt that the vast majority of Earth’s ice loss is a direct consequence of climate warming.”

One of the researchers, Professor Andy Shepherd, told The Guardian that “in the past researchers have studied individual areas – such as the Antarctic or Greenland – where ice is melting.

“But this is the first time anyone has looked at all the ice that is disappearing from the entire planet,” said Shepherd, who runs Leeds University’s Centre for Polar Observation and Modelling.

“What we have found has stunned us.”

How much is 28 trillion tonnes?

It’s an unimaginable number, as is the 1.2 trillion tonnes per year figure, which can make the subject easier to dismiss – so let’s clear up exactly how much ice we’re losing. 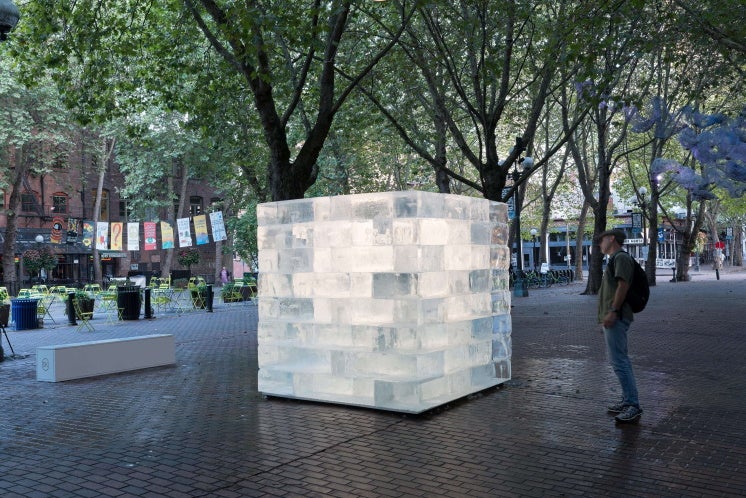 Imagine these 10-tonne hexahedrons appearing in your living room. Once you’re over the initial shock, seven seconds have passed, and there are 27 seven-foot-tall blocks of solid ice looming over you.

Stacked on top of each other, they’re twice as tall as the iceberg that sank the Titanic – and they’re not stopping. Every second, another 38.6 tonnes of ice appears in your home.

One of the study’s researchers, Dr Tom Slater, put it in another context.

He said: “28 trillion tonnes of ice would cover the entire surface of the UK with a sheet of frozen water that is 100 metres thick. It’s just mind-blowing.”

And of course, the Earth’s ice isn’t vanishing and reappearing in your home or across the nation. It’s melting.

There are roughly 2.26 billion households on Earth, so if we equally split the amount of ice that melts each year, it’ll become manageable, right?

Nope. That would equate to 531 tonnes per household, per year – or, put another way, 1.45 tonnes of ice water pouring into your home and everyone else’s, every single day.

The Earth’s melting ice isn’t actually destroying your home – but give it time.

If these trends continue, the sea level could rise by an entire metre by 2100.

“To put that in context,” Shepherd explained, “every centimetre of sea level rise means about a million people will be displaced from their low-lying homelands.”

100 million people being displaced by the end of the century is an unthinkable catastrophe – but there’s more.

Ice reflects solar radiation back into space. If it’s not there, the Earth will warm up at an increasingly rapid rate.

That would almost certainly mean more natural disasters, more animal extinctions, an increase in fatal diseases, and food shortages that cause global panic, riots, and wars.

For anyone counting, yes, that means pestilence, war, famine, and death could all be involved. The four horsemen are at our door.